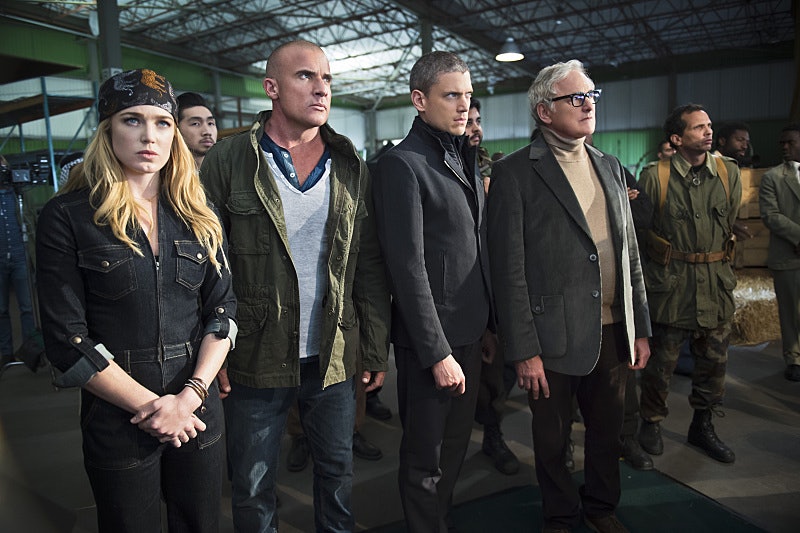 Well, that was certainly unexpected. They've only been together for two full episodes, but our band of Legends are already down a member after Vandal Savage killed Carter Hall, aka Hawkman, on Legends of Tomorrow during their latest attempt to bring him down. While rummaging through their deceased son's possessions, Carter and Kendra learned about the dagger was needed in order to take Savage down, so a majority of the episode was centered around retrieving said dagger and learning the incantation written on the blade. But when the showdown with Savage actually happened, we unfortunately lost Carter in the process. However, before we start weeping into our pillows, I have a sneaking suspicion that Carter will return to Legends of Tomorrow sooner than we think.

Though nothing has yet been outright confirmed regarding Hawkman's fate, I feel inclined to remind everyone that our heroes are traveling in a time machine, which makes pretty much anything possible at this point. They could run into him during one of his other lifetimes in the past or in the future. Because let's not forget that Hawkman and Hawkgirl never stay dead for long. Like Savage, they're immortal, so he's bound to pop up again eventually. He may not be as prominent of a character as same of the other stars, but I wouldn't rule him out just yet.

Adding further fuel to this speculation fire is the fact that Falk Hentschel, who plays Carter/Hawkman, is credited as being in pretty much every episode on IMDB. Granted, that's not always the most reliable source, but it's definitely a positive indicator. And at the very least fans can take solace in knowing that his death (whether it be permanent on this show or not) will be avenged. Now that Kendra knows it is she who must wield the dagger, our Legends are more determined than ever in their mission to stick together and end Savage as a unite once and for all.