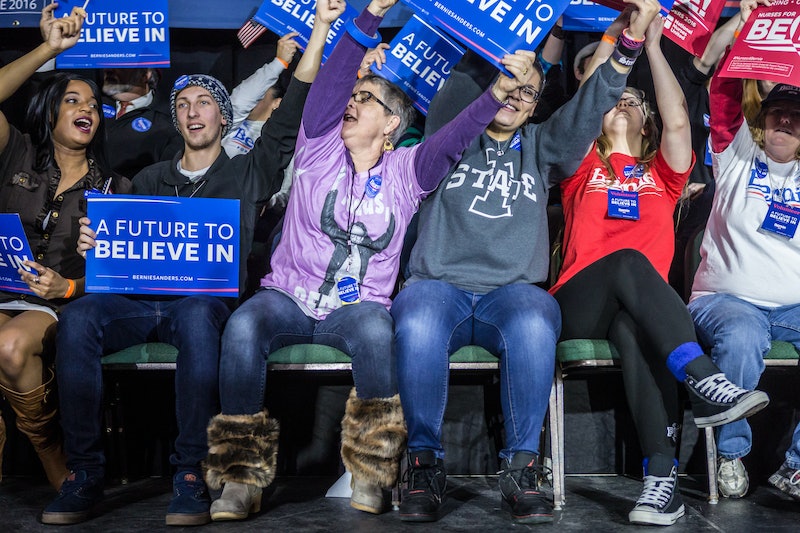 You might know by now that the ever-important Iowa caucuses will be held on Monday, Feb. 1. The presidential debates began back in August, so it has been a long seven months of candidates trying to convince the American people they are fit to lead our country. Even if you've been confused by the candidates' arguments on stage and their subsequent Twitter battles online, you deserve to know why the Iowa caucus is important and how it works. Hint: It's the first time the people (of Iowa) officially show their support for a presidential candidate. Second hint: People usually view a candidate's success or failure leading up to their party's nomination based on the results of the Iowa caucuses.

Barack Obama At The 2008 Iowa Caucuses

History was made after the results of the 2008 Iowa caucuses were released. He was just a senator from Illinois at the time, but Barack Obama came out with nearly 38 percent of the votes from Iowans that fateful night. Winning the Iowa caucuses was a defining moment not only for Obama, but also for our country, showing the impact voters in rural Iowa can have on our elections. Obama was overjoyed at the results and shared his hope for a more cohesive future:

They said this day would never come. They said our sights were just too high. They said this country was too divided, too disillusioned to ever come together around a common purpose. But on this January night, at this defining moment in history, you have done what the cynics said we couldn't do.

Mike Huckabee, former Arkansas governor and current Republican presidential candidate, shared a similar sentiment to Obama after the 2008 Iowa caucuses. Although Obama received the majority of votes that night, Huckabee recognized the power of Iowa's voters and their cries for change:

Tonight we proved that American politics still is in the hands of ordinary folks like you and across this country who believe that it wasn't about who raised the most money but who raised the greatest hopes, dreams and aspirations for our children and their future. And tonight I hope we will forever change the way Americans look at their political system and how we elect presidents and elected officials. Tonight, the people of Iowa made a choice, and their choice was clear. Their choice was for a change.

A Last Chance For Unexpected Candidates

The results of the Iowa caucuses can be unpredictable, but rest assured the candidates will be going all out to win their party's nomination. Because Iowa is 92 percent white, many people have criticized the efficacy of the election process there; since the population isn't representative of the national demographics, yet the state has so much influence on our presidential elections, people can be skeptical of the Iowa caucuses overall. This skepticism has led to some news outlets, like the Daily Caller, claiming everyone hates the Iowa caucuses. To be fair, though, they do present a unique opportunity for lower-ranking candidates to make a final push to the front of the polls, as the publication's W. James Antle III pointed out, writing:

The bottom line is that the early states provide the only opportunity for real competition. It’s the last chance for lower-tiered candidates to have a fair fight with the big dogs and raise the money they need. After that, the race quickly shifts to who can put up ads in the greatest number of expensive media markets simultaneously.

Knowing The Difference Between Clinton And Sanders

According to recent polls, Hillary Clinton is just barely leading Bernie Sanders. Clinton is ahead by 8 points, according to one poll, so in the past week she has tried to make voters understand the marked differences between her campaign and Sanders's campaign. She recently addressed a crowd of 250 in Oskaloosa, Iowa, where ABC News reports Clinton reflected on the tight race with Sanders:

Because of this close race between the two Democratic presidential hopefuls, Clinton thinks that it's imperative for voters to recognize the candidates' differences at the Iowa caucuses. She said:

Look, I am really proud of the campaign we on the Democratic side we have run. We have tried to stay on issues, we tried to draw a contrast, but to do it based on policy compared to what you see happening on the other side. But we do have differences, and as you start moving toward the caucus I want you to know where they are.

The Iowa caucuses will be an exciting time for voters and candidates alike. Only time will tell whether voters will understand the differences between Clinton and Sanders by Monday. If this year's caucuses prove to be anything like those in the past, hopefully we will have an unexpected, yet groundbreaking turnout that will set the tone for the New Hampshire primaries on Feb. 9.

More like this
Boris Johnson’s Leadership Is In Question – Again
By Bustle UK
34 Quotes That'll Inspire You On Juneteenth & Beyond
By Syeda Khaula Saad and Siena Gagliano
How 5 People Upended Their Lives To Fight For Abortion Rights
By Hannah Smothers
How To Fight For Reproductive Rights, Based On How Much Time You Have
By Courtney Young
Get Even More From Bustle — Sign Up For The Newsletter