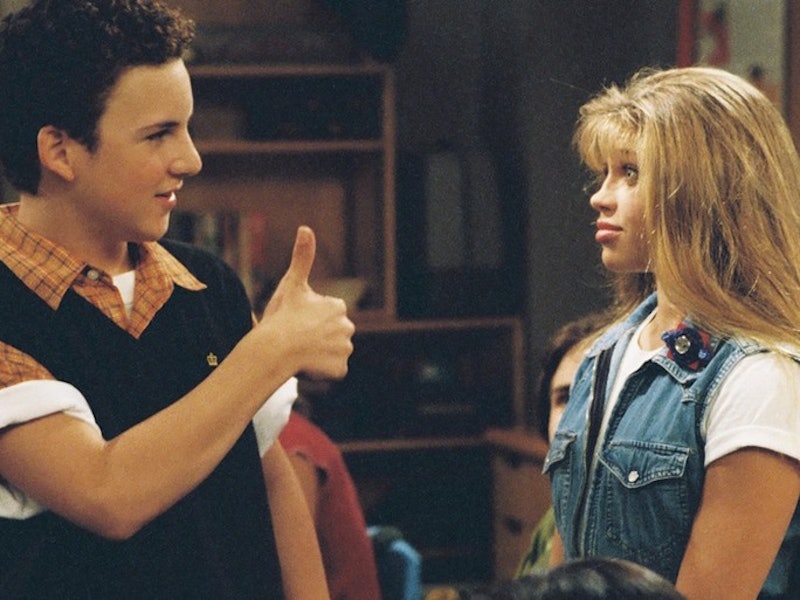 Let's face some facts. In the '90s, we were gifted some incredible fictional couples (Ross and Rachel, D.J. and Steve, Joey and Dawson... that's just to name a few). But, was there any couple more fateful, more meant to be, or more swoon-worthy than Cory Matthews and Topanga Lawrence? The answer to that, of course, is no. Not even close. And there are so many reasons why.

Anyone who grew up in the '90s will tell you that they loved Cory and Topanga together. (If they say anything other than that, they are a liar and shouldn't be trusted, just FYI.) And why shouldn't they? Cory and Topanga were the epitome of soul mates. If anything, these two gave you unrealistic expectations of what love is supposed to look like. I mean, we all wanted a love like theirs. A lets-grow-up-together kind of love. A we-always-knew-we-were-destined-to-be-together kind of love. Something that really doesn't happen that often in real life.

Nonetheless, the pain of realizing that you don't have a Cory and Topanga love story was worth the pleasure of watching theirs unfold before your eyes. From their first kiss, to their breakups, to their marriage, you saw it all. And never once — not once! Not even when Cory kissed that girl in the ski lodge! — did you believe they weren't going to end up together. Now, that's a strong TV relationship. Here are more reasons why Cory and Topanga were the greatest love story of our generation, and certainly the best fictional couple of the '90s.

1. They Were Each Other's First Kiss

In Episode 4 of Season 1 (throwback!), Cory and Topanga shared their first kiss together. Little did they know, they would both be the first and last people they'd kiss. (Because they're never breaking up, ever, obviously).

2. They Proved Friendship Can Turn Into Romance

What started as a friendship turned into playful rapport turned into actual romance. It's probably why their bond was always so strong.

3. They Were Honest With Each Other

These two love birds didn't sugarcoat the truth. The fact that they could talk about anything with each other was refreshing to witness.

4. They Went Through Hard Times

True story: Throughout the series, Cory and Topanga actually broke up three times. I know, it's more than you'd like to remember, but guess what? Each and every time, they got through whatever was holding their relationship back.

5. They Always Worked On Things

As the series progressed, Cory and Topanga inevitably changed. But here's the best part: They changed together. They were constantly evolving, and so was their relationship.

6. They Became Stronger Over Time

Sure, they started out strong and confessed their love for one another early on in their relationship — but that love only continued to build into something that was pretty indestructible.

7. They Weren't Dependent On Each Other

Cory and Topanga had autonomy. They shared certain aspects of their life together, but they also had their own hobbies and interests too.

8. They Had Each Other's Backs

Even after Cory cheated on Topanga (still bummed about this, by the way), she learned to forgive him.

10. They Never Stopped Believing In Each Other

Who was Topanga's biggest supporter? Cory. And who was Cory's? Topanga, obviously.

11. They Never Stopped Believing In Their Love

They believed in it. Whole heartedly. Consumingly. And so we all did too.

Cory and Topanga, I don't think I'll ever love any fictional romance more than I loved yours.