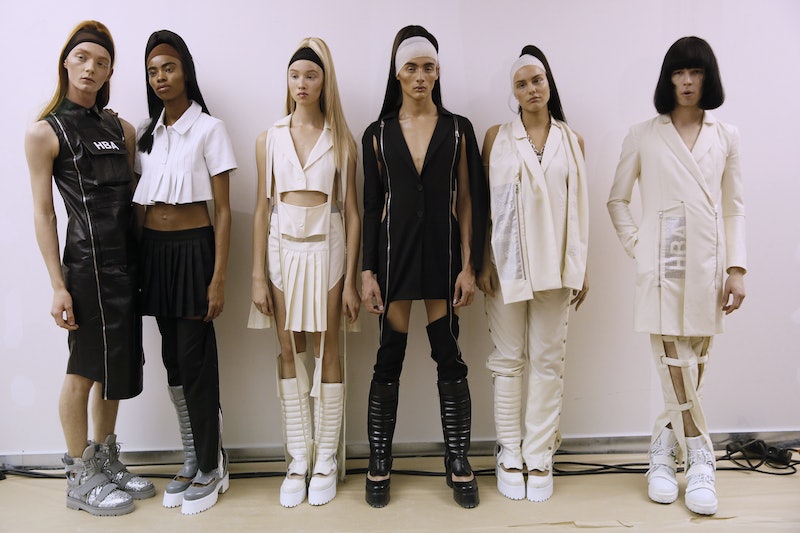 Fashion has enjoyed a sort of gender-bending this year that hasn't made an appearance since the Mick Jagger-blouse-wearing-days of the 1970s. Yep, androgynous fashion in 2015 was certainly in full swing. With runway shows and department stores taking gender out of the equation, we've been treated to men in pussy bow blouses and shrunken jackets and women in tuxedos and the carbon copy outfits of their male counterparts.

It's getting harder and harder to defend exclusively making something a piece of men's fashion versus women's, and that's an exciting idea. Hopefully we're getting to a point where heels no longer belong only in women's closets, fur coats aren't only shrugged off of feminine shoulders, and contouring tools and fake eyelashes can be found in a man's mirror cabinet just as easily as in a woman's. While some might think this is just a passing trend, the important thing to note is that the shift in gender boundaries reflects the changing attitude's of our society.

The fact that we're seeing alpha-men like Kanye West don a kilt and feminine women put on tuxedos and checkered handkerchiefs for editorials reflects our culture's growing awareness over gender being a more fluid concept than previously believed. Below are the seven best moments for androgynous fashion in 2015.

London's Selfridges — a major UK department store — launched a genderless pop-up store this year called Agender, that carried 45 labels that fluidly defied traditionally male and female preferences by marking no distinction between the genders. According to Dazed, after noticing that a lot of its customers shopped in both women's and men's sections, the retailer created the pop-up shop as an experiment. And the experiment appeared to work, as Selfridges is now considering making it a permanent stand-alone.

Moncler Gamme Rouge came out with an androgynous Fall/Winter campaign this year, in which seemingly genderless models wore a mix of the same clothing items with no real distinction highlighted regarding which items were meant to be of the male or female line.

This year's collection went with old school British style, focusing on classic prints like tartan and Prince Of Wales plaid, accompanied with tweed textures. But what's interesting about this campaign is that it encouraged the public to look at the line as a whole, rather than what they might regularly assume to be "for their gender." Women can just as easily wear the men's sweaters, just as the men can style women's skirts.

This has been a big year for gender-blurring on the runway, but I'd argue that Gucci made the strongest stab at it. Piecing together casual, seemingly thrift-inspired items, the A/W show somehow veered away from feeling too campy and, instead, headed towards the romantic.

Whereas androgynous clothing usually means women "borrowing" from the men (think button-down shirts and roomy pants) Gucci made us question why soft colors and rich textures need to be exclusively feminine. And so, its models marched down a line of lace overlay blouses and chiffon pussy bows, matched with berets and shrunken jackets. To further highlight the fluidity of gender, the men's show starred a couple of female models.

Beautycon is a beauty expo in New York City where professionals, experts, and makeup lovers come together in one spot to talk all things beauty. Although still predominantly made up of a female crowd, this year saw a noticeable increase in dudes. And not only an increase in dudes, but an increase in men wearing makeup as well.

Why? Because men and masculine individuals are breaking out of the tough-guy tropes that previously haven't allowed them to explore their creative sides. For some, that creative side might be easily tapped into with the help of eyeshadow and contouring.

When asked about the increase in male interest in beauty products, Beautycon CEO Moj Mahdara told Mashable, "I think this audience is really allergic to categories. They’re allergic to the sort of heteronormative classifications of male and female. I think the reason that you’re starting to see classically male audiences come into Beautycon is because people really want a place where they can express themselves. People want to redefine what beauty is."

Proving that the boundaries between male and female identities and practices are more fluid than previously accepted, this was a great leap for androgynous style.

Shayne Oliver's S/S15 collection took gender ambiguity up to another level with this year's show, which completely erased the arguably unnecessary line of gender on the catwalk. Feeling somewhat futuristic, the collection featured models walking the runway in either high ponytails or bobbed wigs.

Olivia Singer, Fashion Features Editor at AnOther explained, "It was presented as 'an interrogation of what it means to be a man,' a conceptual deconstruction of masculinity through a more literal deconstruction of tailoring. Featuring models with varying levels of gender ambiguity, Oliver played with gender performativity in a way that you rarely see outside of a Judith Butler textbook; it was like a theory degree condensed into a five-minute fashion show."

While most collections have ping-ponged gender to other sides of the spectrum (men in dresses, women in masculine lines, etc.) Hood By Air reminded us that gender is sort of just a construct.

Acne Studios' fall campaign wasn't just about beautiful pastel coats and chunky knits. It was also about showing people of all genders that they can make their own decisions when it comes to how they dress, regardless of what type of clothing is promoted to them.

The creative director behind the campaign, Jonny Johansson, did this by casting his 12-year-old son in a pastel pink coat, a killer pair of heeled boots, and a sleek leather handbag. Every single item is impeccably tailored and well made, and the ad seems to suggest that those are the only things that matter. It's not up to the brand to tell its consumers what gender the piece is meant for.

"I've seen this new generation's attitude to fashion where the cut, the shape, and the character of the garment is the crucial thing, rather than seeking approval from society or to follow set norms," Johansson told WhoWhatWear.

Though the red carpet is still a hub of female stars in gowns, this year saw an increase in actresses and musicians in tuxes and high heels. Some notable stars were Zendaya wearing a suit with Bermuda shorts to amfAR's Inspiration Gala in Los Angeles, Dakota Johnson sporting a sharp black suit to the 2015 InStyle Awards, Jennifer Aniston's marsala-hued Gucci tuxedo at the Critics’ Choice Awards, and Julia Roberts at the 2015 SAG Awards in a satin-accented Givenchy tuxedo. By showing that they feel just as comfortable in boyish slacks as sweeping gowns, these babes reminded women that it's OK to embrace any part of themselves.

Whether 2016 will show the same forward-thinking as 2015 has is anyone's guess, but it's exciting to feel like our culture is embracing more progressive ways of thinking, and that this is starting to hit something as mainstream as fashion.

Want more gender-deconstruction? Check out the video below, and be sure to subscribe to Bustle’s YouTube page for more inspo!