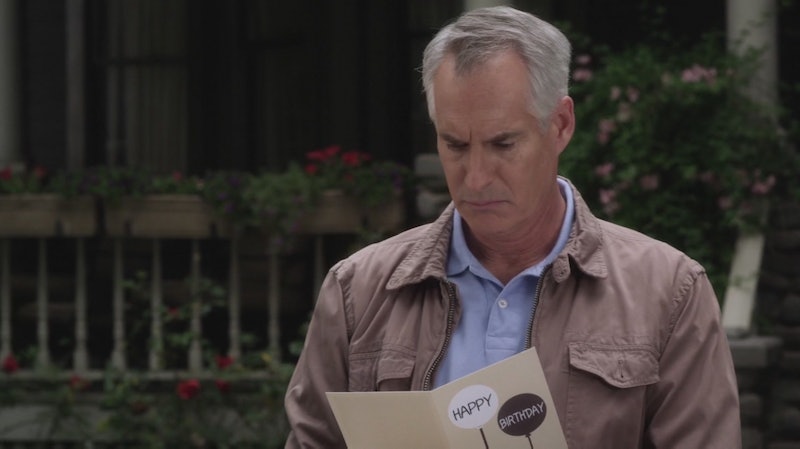 Another day, another murder in Rosewood — and there's no shortage of suspects in Charlotte DiLaurentis' death. Aria looked mighty suspicious at first, but she was quickly established as a red herring and Pretty Little Liars fans are back to square one. (Again.) We haven't been given much clear evidence yet, so the killer's identity is really anyone's guess at this point — but I think we should be looking closely at the decidedly dysfunctional DiLaurentis family for suspects. Jason's absence is a red flag and one particularly dark theory points to Ali, who's perhaps not as reformed as she's led us to believe. But, I have my eye on another member of the family (I mean, I would have my eye on him if he'd gotten any screen time this season) because I'm wondering if Kenneth DiLaurentis killed Charlotte on Pretty Little Liars?

During Charlotte's hearing and throughout the Season 6B premiere, it was stated multiple times that her "family and doctors" believed she'd made tremendous progress and was ready to re-enter society. But, when it came down to it, it was clear that only one family member supported Charlotte enough to even bother attending her hearing. Ali clarified to her friends that Jason wasn't supportive of their sister, but she didn't say a word about her dad. The fact that he hasn't been shown or mentioned this season is a huge red flag — because Ali is living in the DiLaurentis home and presumably Kenneth still resides there as well. When a Pretty Little Liars character is absent from our small screens, it's usually a clue that they're up to no good.

I know, I know — it's a pretty big leap from "worst father ever" to "killer," but he may have motive. Remember Jessica DiLaurentis' still unsolved murder? It was one of the mysteries that we all thought would be resolved in the Season 6A finale, but her killer still hasn't been revealed — and Kenneth has always been a suspect in his ex-wife's death. In fact, Veronica Hastings' suspicion of Kenneth is what got the Rosewood moms locked in the DiLaurentis basement on prom night. (I'm still waiting for an answer about how they escaped, by the way.) The Summer of Answers resolved the deaths of smaller characters like Bethany Young and Marion Cavanaugh, so it seems likely that Mrs. D's death was left a mystery because it could be important to Season 6B. And, I. Marlene King confirmed this in her August interview with MTV:

Q: [W]ho killed Mrs. DiLaurentis? Is that going to be a driving mystery next season?

A: Yes, yes, yes. You will find out who killed Mrs. D and that’s a part of the larger mystery that we have to tell.

All the answers provided by "Game Over, Charles" boiled down to Radley and Charlotte's role as A — but since 6B has given us several new mysteries, it seems likely that Mrs. D's death is directly related to at least one of them. Her daughter's murder is the most likely possibility. When Charlotte told Ali about discovering her mom's body, she was clearly still incredibly distressed by the death because as she told her sister, "Mom was the only person who ever really loved me." If Kenneth is the killer, or Charlotte believed him to be, they could have had a violent confrontation that resulted in her death. We've seen his aggressive temper in the past, most notably when he accosted our beloved Hanna in Season 3 because he believed she'd played a "cruel joke" on the family.

In the same interview with MTV, King described Kenneth as the show's "true villain." In this context, she meant that his horrific parenting was a huge factor in turning Charlotte into the type of person who would terrorize a group of innocent girls. But, it could also be a clue that he's an overall sinister person whose acts of cruelty haven't been stopped. He has yet to face any real consequences for his evil behavior — but perhaps that will change if he's identified as Charlotte's killer.