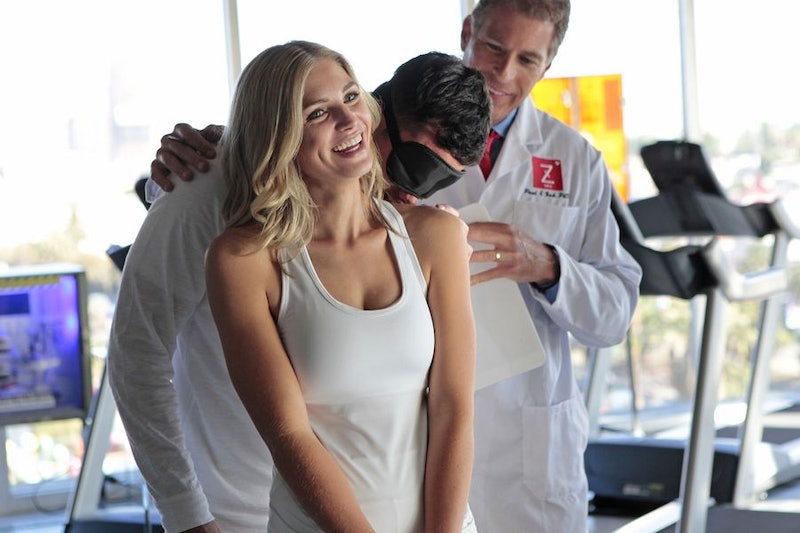 Every season of The Bachelor has one contestant that’s a little odd, to put it lightly. Whether it’s Ashley S. from Chris Soules’ season or perhaps Tierra of Sean Lowe season fame, the show tends to have one woman who's pinned with the “bitches be crazy” vibe on for the duration of the season. In the case of Ben Higgins’ year (which is Season 20, if you can believe that), that woman is Virginia-based news anchor Olivia Caridi. After just a few episodes, Olivia’s surprising antics have branded her as that Bachelor contestant, and while it's always fun to have a wacky contestant, it's important that we cut Olivia some slack and not simply dismiss her as "crazy."

It's not that she hasn't done some questionable things. Olivia is so enamored with Ben that she seemingly has to be with him at every possible moment or else she might spontaneously combust; she even frequently interrupts Ben’s time with other contestants as a means to maximize her own. And then there's that thing she has about Ben conveying all of his emotions to her in a series of hand squeezes, touches on the small of her back, and meaningful glances across the room.

It all comes off a bit weird, and Olivia's self-centered behavior regarding Ben is certainly not winning her any friends in the Bachelor mansion (although really, who’s there to make friends? No one). But to simply label her as "crazy" is dismissive — Olivia comes across as a smart, well-adjusted young woman with a good head on her shoulders. Her occasional odd behavior is likely just a result of being on The Bachelor; filming takes place over a maximum of three months, during which time every event and emotion is heightened for the cameras. The show films basically 24/7 for weeks on end, and the only real outlet contestants have are the other contestants, the Bachelor (or Bachelorette), and the producers — maybe Chris Harrison. There are no magazines, books, or cell phones, but there is a ton of booze. All of that shakes up into one delicious cocktail of over-the-top behavior and questionable antics.

Olivia is not weird— she’s simply sipping the Bachelor Kool-Aid like everyone else. Sure, she gets a bit too competitive, but she’s on a show where every other woman is considered her enemy — in order for her to win, it is imperative that she gets time with the Bachelor, no matter the cost. All of the other women have the same mentality, and are clearly just as intent on ending up with their true love as Olivia. Unlike real life, the world of The Bachelor makes it so that the experiences of friendships, dating, and romance consist of an endless cycle of dates, candles, and roses until you either go home or get engaged — it's no wonder some of the contestants, like Olivia, often resort to somewhat extreme behavior.

Olivia is just one in a long line of women that The Bachelor fans have called "crazy" for behavior that actually makes a lot of sense for the show they're in. She’s really just a normal girl, caught up in the hype of an intense, fast-paced reality show.