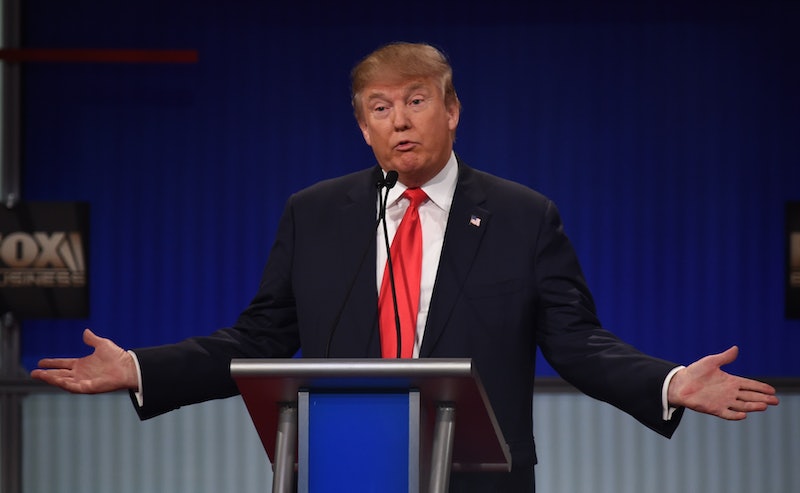 We may be into February, but the recaps of 2015 and what we learned are still coming in, especially in regards to dating. One such recap comes from Match’s sixth annual Singles in America report. Every year the online dating site compiles data from thousands of singles to see not just who’s dating who, but how these people date, where they go on dates, and who’s talking about what over which drinks. It’s as all-encompassing as a dating report can get.

Match interviewed over 5,500 singles in 2015 for the year-end report. One of the most interesting aspects, especially because we are in a very important election year was, of course, politics. According to the Match’s findings, the majority of the singles surveyed, at 40 percent, identify as Democrat, while only 19 percent call themselves Republican. But what’s even more interesting is that more people, at 24 percent, don’t have a political affiliation at all. Even as we get painfully closer to election day?! Come on, you guys!

Another place where things are pretty interesting, if not totally surprising, is how politics play a hand in how people date, so much so that Hillary Clinton supporters and Donald Trump supporters are practically night and day. While you probably shouldn't let politics stand in the way of your chances at love, here are 10 things to expect when dating those who will be voting for Clinton and those who are fans of Trump.

1. Clinton Fans Prefer Their Wine On A Date

According to the Singles in America report, Clinton supporters love their wine on a date. They love their wine so much that they’re 129 percent more likely to drink wine than Trump supporters. I can totally see this. I love my Clinton and I love my wine.

2. The Majority Of Trump Supporters Are Beer Drinkers On Dates

While Clinton’s constituents like their wine, 79 percent of Trump supporters reach for beer, which is funny, because can you imagine Trump drinking a PBR? I can’t.

I think this one goes without saying, because, well, Trump’s views don’t exactly align in a friendly manner with the LGBTQ community. However, that being said, 606 percent of Clinton supporters are more likely to be gay. As for how many gays support Trump, the report didn’t divulge.

4. Trump Supporters Aren’t So Great With Moving Past Exes

Although we’re all guilty of being hung up on some ex at some point in our life, it seems that Trump supporters get REALLY hung up on their past relationships. In fact, if you’re on a date with a Trump supporter, there’s a good chance they’ll actually spend some quality time talking about their ex. Why? Well, they’re 116 percent more likely to talk about an ex than those who will be voting for Clinton in November.

5. Clinton Supporters Are Looking For Love

While Trump supporters may be lingering in the past, Clinton supporters are look straight ahead to the future. It’s these singles, 43 percent to be exact, who are “actively looking for a commitment," with 38 percent waiting for the right person to come along. Falling in love AND having Clinton in the White House sounds like romance galore, if you ask me.

Apparently, those who think Trump should be king of this fine land are also the same people who think ghosting is an appropriate way to end things with someone. For 36 percent of female Trump supporters, ghosting is a totally cool means to take their leave. And, to be honest, I imagine Trump would agree with this method, but not without one final, "You're a loser," text before disappearing forever. He really does have an affinity for that word.

7. Clinton Supporters Are Less Than Forthcoming About Their ‘Number’

While your number is your number, and something you don’t even need to consider sharing ever, let alone on a first date, Match found that Clinton supporters are 102 percent more likely to lie about their sexual past than Trump supporters. When it comes to the sexual past of those who think Trump is a great candidate, 54 percent of them have more than five and, apparently, are a bit more open to sharing that information.

8. Trump Supporters Want You To Put Out On A First Date

If you’re on a date with a Trump supporter and they get you into bed, then you might want to have a clear idea of what side is your best side. Unlike Clinton supporters who want to keep things tame, Trump supporters want to have sex ― and have the memory last a lifetime on film. That’s right; those looking toward Trump to be our fearless leader are 99 percent more likely to film themselves getting it on… not that there’s anything wrong with that.