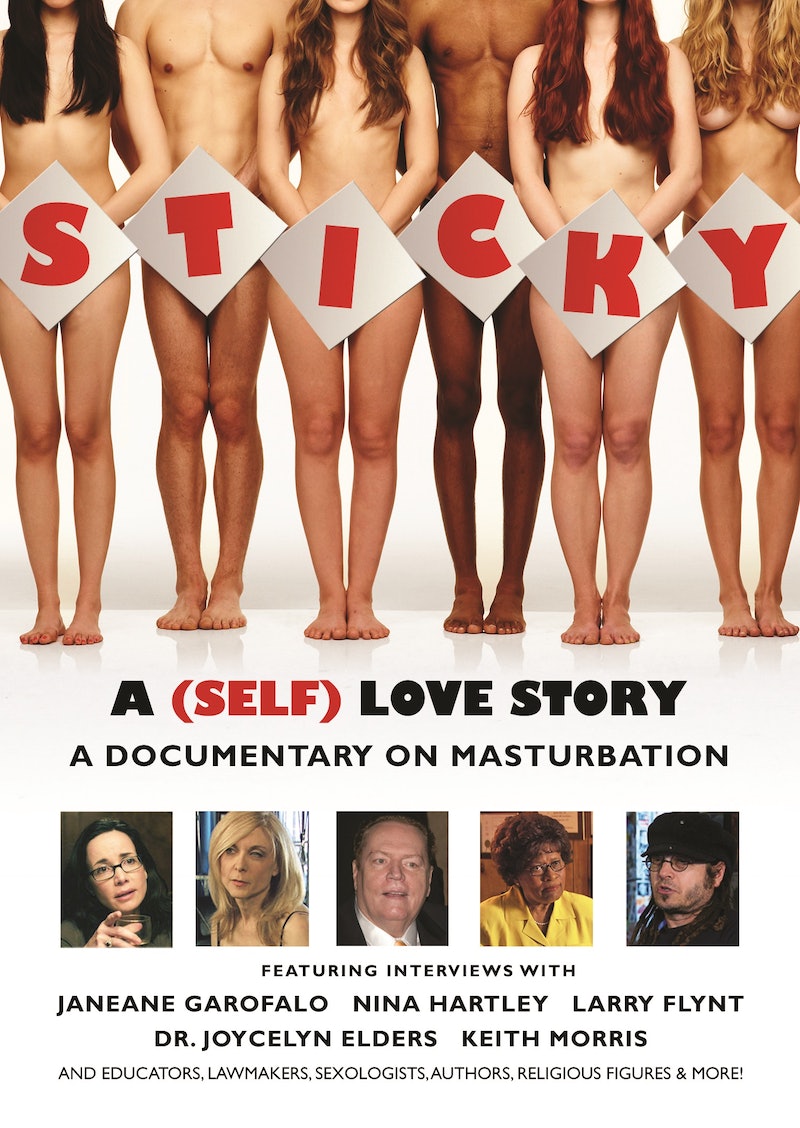 "I hope the film primarily accomplishes getting the word out about the fact that something so common is such a stigma," Tana tells Bustle. "I think first we need to recognize this fact to do something about it. And then, in addition to that, I'd like to get more dialogue, especially around education. There's this fear around sexuality and children.. there's this hear no evil see no evil approach to it. leading toward more confusion."

In the documentary, Tana shares the personal effect this attitude had on him as a child, when he was outcasted by classmates simply for admitting he masturbated. It took quite a long time to get the documentary made — about seven years. This had a lot to do with people's reluctance to collaborate on a film delving into such a taboo subject. Tana, an alumni of the Honors College at Arizona State University, reached out to his alma mater (several times) in hopes that they could alert students to a social media internship that would help with promotion of the film. No dice. Tana told me, "They simply refused; they just said no. They gave no reason — the email just says 'no.'"

Even when the film got a distributor, there were still obstacles to completing production. For instance, Tana was told by several VOD platforms that they would never stream a film that had "masturbation" in its title, which is why he came up with the clever title that the film has now. And even still, with the film complete and ready to be released onto VOD platforms, media executives become squeamish. Tana explains, "Someone at CNN said if they put anything like this movie out there, they would be forced to resign... Some VOD platforms that are family friendly refuse to even have our film on there."

"I was veering away from the personal. I was getting too removed by just talking to these experts. What really makes this subject so fascinating is how personal it is. And so what would happen if I ask myself or actually dared put myself on camera. What would happen if I started asking experts personal questions.. People got very uncomfortable. I thought, wouldn't it be cool if we interwove this story with a narrator who is typical, hiding his face in shadows when interviewed, and as we go on, we start to reveal more about him. And then we start turning the tables on other people in the movie and ask them personal questions, too. It's all to remind viewers that while we may be talking about it, let's not forget, we are still embarrassed today... this is still very much a taboo subject."

This attitude is why Tana first set out to create the film as more of a mockumentary, and didn't immediately connect his interest in destigmatization with the awful incident he had experienced as a child.

"I initially started it in my own psyche as a joke, and then as I studied it, I started realizing this is a real subject matter, and it needs to be treated that way. It wasn't until about four or five years in, when I was struggling so much to get the movie made because of the resistance to the subject matter, that I started wondering, why do I want to finish this movie so badly? I started self-reflecting — and then I started getting past my own delusions and delving into my past, where I dug up recollections I'd suppressed from middle school."

While the documentary discusses heavy topics like sexual shame and suicide, you find that you can easily keep watching because it somehow remains lighthearted overall. Explains Tana, "This movie is funny, but it's no joke. Because of the sensitivity of the subject matter, we need humor to get past our fears, and then we can actually have a healthy discussion."Here is a preview of some of the important things you'll learn when you watch Sticky: A (Self) Love Story, and be sure to check out this exclusive clip!

One of the most disgraceful incidents within our government took place in 1994, when Dr. Joycelyn Elders — the nation's first black woman Surgeon General — was forced to resign after merely supporting one idea; children should learn about masturbation in school as a way to prevent unplanned pregnancies and the spread of STDs. Dr. Elders expressed agreement with the proposed initiative at the UN World AIDS Day conference that year, and her statement was met with Puritanical backlash and panic. Elders refused to change her position on the matter, so President Bill Clinton made her vacate her position, or fired her. Dr. Elders is interviewed in the documentary, and like the badass queen she is, still refuses to change her mind. She says, "I was not the President's Surgeon General. I was not the Congress's Surgeon General. I was the people's Surgeon General, and I was going to do what I felt was the right thing to do for the most people."

In one interview, Kathy Dennis, author of Art/Porn, says the injustice faced by Dr. Joycelyn Elders represents the devastating fact that "We can't have a public discourse about sexual education in this country." This incident may have happened in 1994, but things are no better 22 years later. It was a struggle for Tana to even get educators to speak on camera. He told me, "I was surprised at how many educators and teachers would not speak to me because they were afraid of losing their jobs. One of the teachers we did get is my cousin; I had to go to family to get someone to help me."

2. Corn Flakes And Graham Crackers Were Developed As Part Of A Creepy Anti-Sex Diet

Dr. John Kellogg and Reverend Graham, creators of snacks and cereal that are probably in your cupboards right now, were also vehemently against sexual activity. They marketed Graham crackers and Corn Flakes as part of their "healthy" no-sex lifestyle, in which people were encouraged to engage in sex only once a month — if ever. Sex educators and psychologists in the film break down Kellogg's and Graham's pseudoscience, as the men believed semen to be an essential, rarely produced fluid in which 40 oz. of blood were required to create 1 oz of those little tadpoles, and thought that their crackers and cereal would squash sexual desires in young men who ate them.

Alabama is the only state in the U.S. that bans the selling and purchasing of vibrators and sex toys. Tana speaks to Sherri Williams, the owner of Pleasures, a sex shop in Huntsville, Alabama, who refuses to acknowledge the archaic law passed in 1998. In fact, not only has she kept her store in business, but, like a boss, she opened up another drive-thru sex shop in 2010. Williams does this even though the law states that she could be fined $10,000 and/or imprisoned for one year. Williams has fought the law since 1998, and though she has not gotten it repealed, every day that she keeps her store open is another victory. The sexist aspect of the law is infuriating. She says, "Men are outlawing toys designed to help women achieve orgasms." On the other hand, as sexologist Dr. Jenn points out, Viagra could not be more easily accessible. The film reminds us that while vibrators are unlawful, Alabama has some of the most lax gun laws in the country and the second most gun deaths. This is the same ideology resulting in the #CocksNotGlocks protest currently taking place on a University of Texas campus in response to the fact that guns are allowed on campus while dildos are banned.

More like this
The 19 Best Tweets & Memes About Bisexual Awareness Week
By Lexi Inks
Breeding Kinks Have Been On The Rise Since Roe V. Wade Got Overturned
By Lexi Inks
Are Quality Time & Gift-Receiving Love Languages Compatible?
By Lexi Inks
On TikTok, "Cbat" Has Been Named The Worst Sex Song Ever
By Lexi Inks
Get Even More From Bustle — Sign Up For The Newsletter