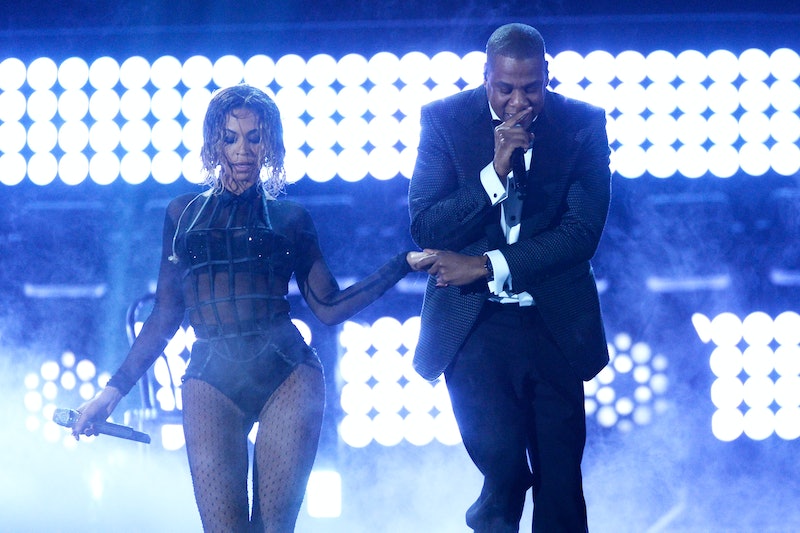 As has been proved time and time again, any time Beyoncé does anything, the haters will emerge from the primordial ooze they occupy (which, actually, I think, is Twitter) and after Beyoncé's performance of "Drunk in Love" at the Grammys Sunday night with husband Jay Z, Twitter was quick to call her "too skinny" and "not thick enough." Because apparently Beyoncé has to remain ~bootylicious literally~ forever after she sang that song in 2001.

Beyonce was wearing a beautiful and very revealing La Perla bodysuit during her performance and later wore a sparkly, sheer white gown from Michael Costello, who's apparently a little twit, because he revealed Beyoncé's dress size for everyone to talk about. "What has she been doing, not eating?" people wondered. Well, she was probably just hustlin' hard, and anyway, it's none of your business, or ours.

Part of Bey's brand of feminism (which has been tirelessly debated recently) has been body acceptance, making it all the more disappointing that her body is what's getting the the attention. It's baffling that with Beyoncé especially, fans will be so quick to turn on her if she makes even the slightest of "missteps," in this case, her mistake was not being a certain weight.

Even members of the "BeyHive," Beyoncé's supposed biggest fans, were hating on her thin figure.

But that is not to say Beyoncé is the perfect feminist superhero. Yes, I love Queen Bey and I think her secret release of such a comprehensive, artistic and sexy album like BEYONCE was truly awe-inspiring and a classy "go to hell" to all her haters and detractors. But if we are to take a critical look at her Grammys performance, the real issue is not her thinness (that's a total non-issue, in fact), but Jay Z's verse on "Drunk in Love," in which he sings the line "I'm Ike Turner... now eat the cake, Anna Mae."

The reference is to the Tina Turner biopic What's Love Got to Do With It that was about the very physically and emotionally abusive relationship between Ike and Tina Turner. A scene in the film shows Ike Turner shoving cake in Tina Turner's face to "celebrate" her success. My academic reaction is "ughhhhhhhh."

As Daniel D'Addario notes at Salon, the reference is particularly disgusting especially because Beyoncé often cites Tina Turner as one of her idols, and because Bey's relationship with Jay Z mirrors Tina's with Ike Turner's, in that Bey's success has surpassed Jay's. When BEYONCE dropped, there was initial criticism of the lyrics, especially from Black Girl Dangerous, who expressed a personal hurt:

["Drunk in Love"] was one of the last videos I watched and after some legit pro-woman awesomeness, it felt like a slap in the face. A very intentional one. In the middle of this big ol’ so-called feminist triumph, Jay-Z pops in to glorify violence against women and…that’s just cool with Bey, New Black Feminist Superhero of the Universe? And everybody else, too?

During their Grammys performance, Beyoncé mouthed the words along with Jay Z. It might seem small, but her literal vocalization of such a violent reference makes her complicit in the affront. There has been a deluge of criticism of Beyoncé's performance, aside from her noticeable weight loss (which, again, shouldn't be being discussed at all) — some thought it was a boring performance, some thought that it was too sexual, and Beyoncé should not be immune to being called ou t— and by no means is she. Far from it.

But if we are to engage with Beyoncé on a critical level, let it be for her actual faults, like the gross misconduct of letting Jay Z sing such a violent line that glorifies domestic abuse, not for her weight loss or aggressive sexuality. The Ike Turner line is unacceptable, if I do say so myself.