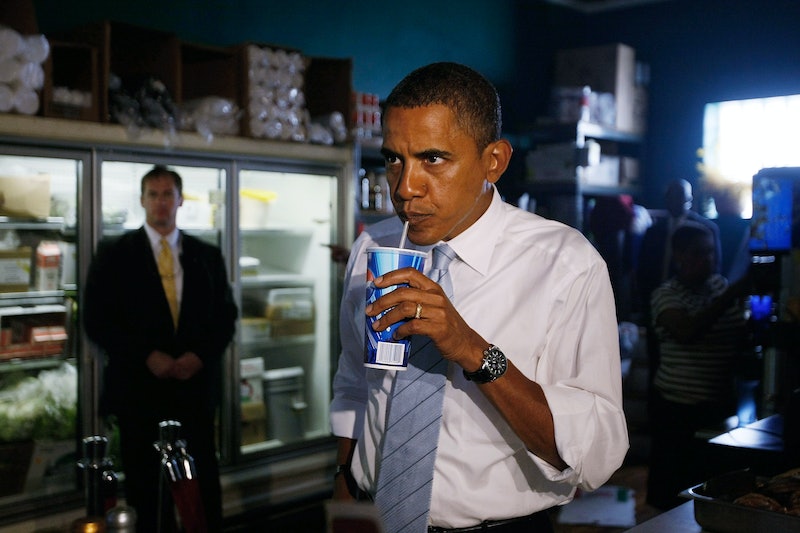 Everyone's favorite applause-orgy, ehm, speech of great political importance airs tonight at 9 pm, EST. Coming to a false hope for bipartisanship near you, President Obama's 2014 State of the Union is expected to focus on everyone's favorite, very real, problem: income inequality. And while we're all for addressing this and other important issues tonight (or, um, yesterday), six years of delayed change we can believe in has left us in need of a little lubrication.

So here, dear Bustle readers, is your official State of the Union drinking game, complete with bonus bud for those of you legally allowed to enjoy it. Best go grocery shopping now — you're going to need a few ingredients. Numb yourself to harsh political realities responsibly.

Obama uses the phrase "The state of our nation is strong": one Buttery Nipple shot

Obama says "I call on Congress": take a sip of Coors, or some other beer most Americans can agree on

Obama announces he will sign executive order to raise the minimum wage for the entire nation: one After Five shot

Obama announces he will end federal raids on legal marijuana vendors: consume one magic brownie (if you're in Colorado or Washington, of course)

Hey, We Can Dream:

Obama promises to end all NSA surveillance of citizens without a warrant: go to bar and order any beer, not on tap

Duck Dynasty star Phil Roberston (who will actually be in attendance) spontaneously combusts when Vice President Biden lays one on Boehner in a rare public of Irish-homoerotic-bipartisan-affection: one Nutty Irishman coffee

Obama announces he will legalize marijuana nationwide: call in sick, download Fantasia, consume one platter of nachos, and, if you're in the Centennial State, prepare some weed ice cream. (Clean-up another time.)