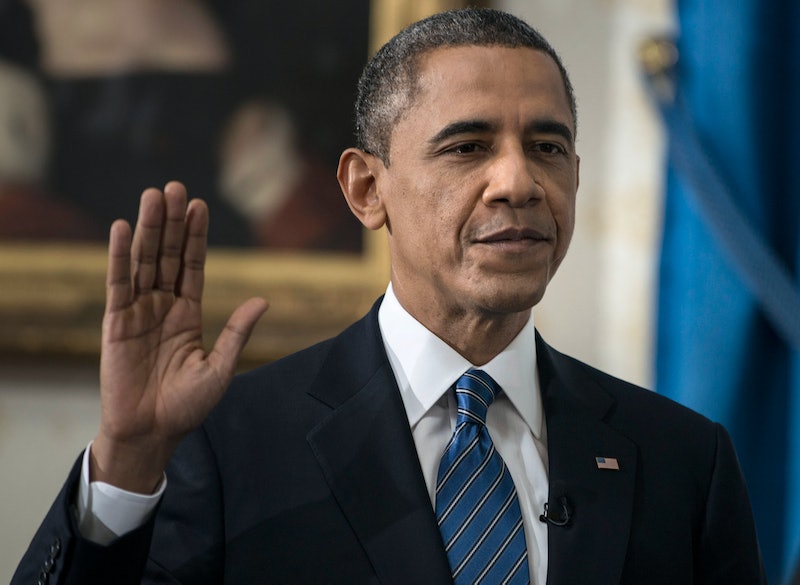 We’re fast approaching what’s either one of the best or one of the worst parts of the holiday season: New Year's Resolutions. Depending on who you ask, they’re either a valuable way of committing to important life changes — or an annoying reminder of your inability to commit to making said life changes. Regardless of whether you love them or hate them, merely coming up with resolutions can allow us to glimpse what we truly value.

Some of the people most in need of a fresh start in 2014 are our elected officials. But since they’re busy running the world, they probably don't have the time to think of what their resolutions should be. (Actually, Congress probably does have time to do that, but we’ll get to that in a second). So, we took it upon ourselves to write their resolutions for them. Hopefully they’ll be better at sticking to them than we are.

Despite differences in rhetoric, both political parties are generally pro-Wall Street, pro-bank, and pro-plutocratic. But Senator Elizabeth Warren isn’t, making her something of a rarity in Congress — if not outright one-of-a-kind. Her election in 2012 was one of the brightest spots for progressives in a night full of bright spots, and regardless of whether or not she runs for president, she has the power to fundamentally transform the platform of the Democratic Party into a more populist, equality-centric agenda.

But people enter the political system with all kinds of optimistic ideas about how they’d like to shake things up. That idealism almost always gives way quickly to the realities of governance (see the entry for President Obama, below). If Warren’s star continues to rise, she’ll face consistent pressure to ease up on her populism, succumb to the status quo, and become just another politician. That would be a tragedy, as Warren is likely the best shot progressives will have for a quite some time. In 2014, she should stay the course, fight for what she believes in, and continue to kick ass.

Congress: Do Something. Anything.

It would be a bad idea for Congress to indiscriminately pass bills just for the hell of it, but our elected officials seem to be on the opposite end of that spectrum. Over the last two years, Congress has been historically unproductive. And that’s not hyperbole: The 112th Congress has passed 561 bills, which is less than literally any other Congress on record. The ratio of bills introduced to bills passed is eight percent, also lower than any other year since 1947. In short, Congress hasn’t really been doing much.

And it’s not like there isn’t anything to do. Never mind landmark legislative undertakings like immigration reform, energy reform, gun control, or a second stimulus package (although any of those would be great). Simply passing a farm bill, or holding a vote on ENDA would be a substantial accomplishment by the current standard. Which is sad, but at least that would be better than continuing to do nothing. At the very least, it would be awesome if Congressional Republicans raised the debt ceiling without raising a fuss this time.

If there was any single individual who could have prevented the disastrous government shutdown, it was Speaker John Boehner, who could have introduced a clean bill to fund the government at any time. He didn’t, though, because the bill probably would have passed, and that would have enraged Tea Party Republicans who pushed the shutdown to begin with. It was a rather pathetic display of impotency by the House Speaker, who personally opposed the shutdown, and seemed to be a net negative for everybody involved (except President Obama, whose approval ratings went up during the shutdown).

But last week, Boehner hinted at a change of course:

It wasn’t a full-fledged middle finger to the hard right, but it was an indication that maybe, just maybe, the Speaker is tired of seeking permission from the Tea Party for everything he does. Fully embracing that independence, if you want to call it that, would be a great way for the Speaker to ring in the new year.

As President Obama tells it, he’d really like to close the Guantanamo Bay facility in Cuba, but Congress hasn’t approved the funds to close it, and there aren’t any countries willing to take on the detainees once they’re released ... so it just can’t be done. But that sounds like a lot of excuses. If Obama really, really wanted to, he could close Guantanamo Bay. It would require some legal creativity, but it’s possible — here’s one way, and here’s another.

Does Obama even want the prison closed? Only he can know that for sure, but at this point, it’s irrelevant. The majority of prisoners have already been cleared for release, their conditions are unacceptable, and the constitutional underpinnings of the facility itself are questionable at best. Obama is notoriously concerned with managing his legacy, and one way to help cement a positive one would be to follow through on what he promised five years ago and close the damn prison.