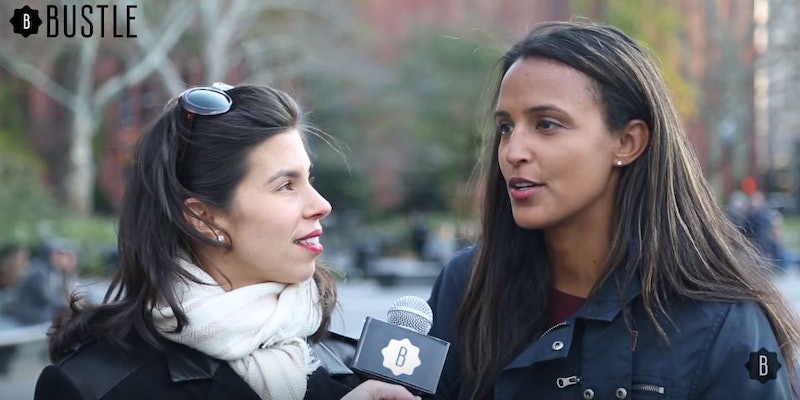 Fact: Before the age of 17 years old, 84 percent of women will experience street harassment, according to anti-street harassment organization Hollaback!. With the overwhelming majority of women being targeted starting at such a young age, it's unsurprising that many enact measures to protect themselves (even though the onus really should be on harassers not to harass, rather than on victims not to get harassed). In order to find out how women protect themselves on the street, Bustle asked real women in New York City what their methods of self-defense are — and in the process, they drove home exactly how much of a problem street harassment is.

So: How do women protect themselves? Bustle received a diverse array of answers, including carrying actual weapons like pepper spray and knives, talking on the phone, keeping the phone put away, and keeping your keys at the ready. (A friend taught me this one years ago, and now I "Wolverine" my keys in between my knuckles every single time I'm walking alone.) Keeping your eyes open to your surroundings was another one, and one woman even said sometimes she'll walk faster.

A woman at the end of the video made a wonderful point: There is no shame in preparing a plan to protect yourself. It's a way to keep the power in your own hands, and since street harassment, sexual harassment, and sexual assault are so often about power — specifically about someone forcibly taking it away from the victim — maintaining control of a situation can help fight it and keep you safe.

At the same time, though, it's frustrating that we live in a society where having a plan to protect yourself from street harassment and sexual assault is necessary in the first place. As has been said by so many others, time and time again, our priorities shouldn't be on teaching people not to get harassed or assaulted; our priorities should be on teaching people not to harass or assault in the first place.

Furthermore, it's hard to ignore the gendered aspect of the need for self-defense. As a woman in the beginning of the video noted, "I've never seen a self-defense class advertised for men. Ever." I wanted to check this out for myself, so I Googled "self defenses classes." Out of the first 10 results, five mentioned women specifically. The other five were ambiguous. Clearly, advertising these courses to women is satisfying some kind of demand. Why is that demand there in the first place? How about, instead of creating a culture of women prepared to attack in self-defense, we create a culture of would-be attackers who choose peace and respect instead of violence? Don't put a bandage over the problem. Let's stop the problem from happening at all.

It's easier said than done, I know. If the solution were that simple, the problem would probably be gone by now. But at the same time, the fact that a woman's safety largely depends on her own preparation for an attack makes me cringe.