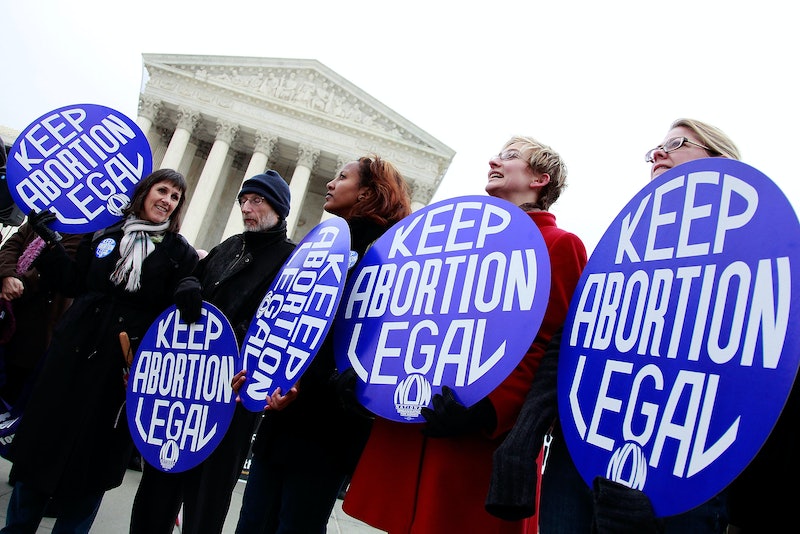 For the first time in history, the United Nations Human Rights Committee has punished a country for denying a citizen an abortion. Through this decision, the UN committee has deemed abortion a human right — and it should be. The ability to decide whether or not you become a parent is not a luxury, but a basic right we all deserve.

In this case, which began in 2001, a 17-year-old in Peru was denied a medically necessary abortion. The woman complained to the Human Rights Committee, which asked that Peru's government pay her reparations. She just received them.

“We are witnessing the results of advocates’ dedicated perseverance and the power of the UN and other international bodies to ensure our basic human rights to dignity, health, and freedom from ill-treatment,” Lilian Sepúlveda, an attorney who brought the case to the UN, said in a press release.

This decision will hopefully set a precedent for future cases brought to the UN regarding denial of abortions. 25 percent of the world's population lives somewhere where abortion is illegal, according to Women on Web — and that is absolutely an injustice. Here are five reasons why complete control over one's reproductive future is a human right.

As Gloria Steinem has pointed out, women's freedom is greatly limited when they don't know if or when they'll have to drop everything for a life of motherhood. Recently, a study published in BMC Women’s Health backed this up: Women with access to abortions have a more positive outlook on the future. When we deny people abortions, we deny them the ability to plan their lives around their goals.

Those who believe life begins at conception fail to address the fact that about half of fertilized eggs leave the body naturally, according to the UCSF Medical Center (and confirmed by Bill Nye in the video above). If pro-lifers were really concerned about fertilized eggs, they would be working on ways to prevent this "loss." Regarding stages of fetal development beyond fertilization, the neural mechanisms for pain are not usually in place until about 26 weeks in — after abortion is typically legal — according to a paper in the British Medical Journal. What constitutes a life may never be answered definitively, but that's exactly why the choice should be left up to each individual.

Even if a fetus did constitute a person, it still wouldn't matter because what somebody does with their body is a personal choice that nobody else can take away. Blood donations can save lives, but we still don't force people to give blood. People's decision on whether or not to compromise their physical well being is more important than any life they could save. As the thought experiment created by Judith Jarvis Thompson and presented in the video above explains, if you were kidnapped and hooked up to someone who needed your blood to survive, it wouldn't be unethical for you to escape. The right to abortion works the same way.

If somebody is not ready to start a family, they will often find ways to avoid it, even if safe abortions are not available. People in need of abortions are often in desperate situations. Sometimes, their physical health is threatened by the pregnancy. Other times, they will be unable to survive if they have to support a child. Therefore, in countries where safe abortions are not accessible, people resort to self-induced ones, according to a study by the World Health Organization and the Guttmacher Institute, which also found that banning abortions doesn't decrease abortion rates. In fact, the countries with the highest abortion rates are ones where it's illegal, according to the Guttmacher Institute. Even people who are against abortions would be better off supporting laws that offer them safely.

5. Abortions Can Save Lives

According to the American College of Obstetricians and Gynecologists, there are a number of situations in which not getting an abortion can be life-threatening. Medical conditions that make abortion necessary to save the parent's life include infections, heart failure, and preeclampsia. But ultimately, it doesn't matter if an abortion is medically necessary because it's every individual's choice, and they don't have to justify it.