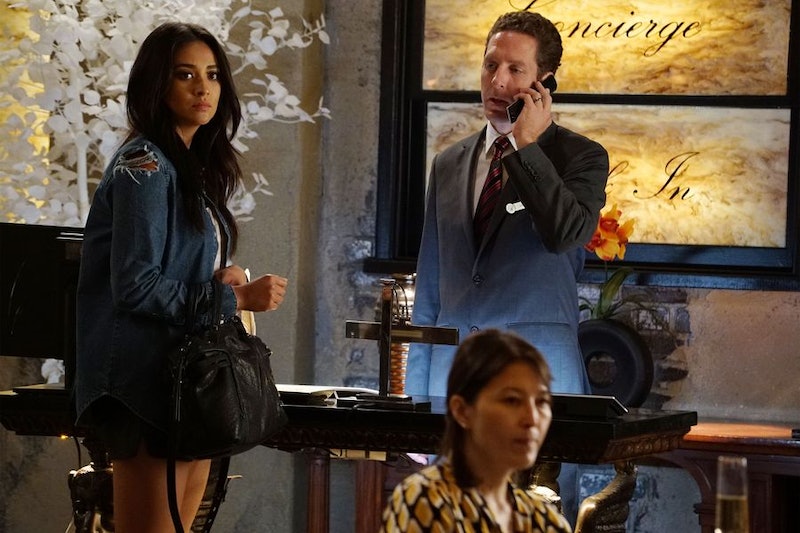 A may have used an array of disguises throughout her tenure as the Pretty Little Liars big bad, but I think she was just outdone. In this week's episode "New Guys, New Lies," someone wore a mask of an old man on Pretty Little Liars, and though the reveal didn't show whose face it was covering, it was still ridiculously creepy. So who was wearing the mask? I think it's safe to say the new villain, "B" as many fans are calling him, has made his presence in Rosewood known through more than texts.

About midway through the episode, we first caught sight of this disguise while Emily and Aria talked in the Montgomerys' home. As the two spoke, totally unaware they were being watched, the camera panned to the window, where what appeared to be an old man in some kind of blue uniform observed them through the window. It was a very brief scene, and the window's glass made the image a bit fuzzy, but this was clearly someone we have not seen before on Pretty Little Liars. The logo on his hat and jacket sleeve made it appear that this man worked for some sort of group, or was perhaps a mailman or working for a delivery company. However, we later saw him wearing a very different uniform, so it became clear that this was nothing more than a disguise to get him into various places — and the result of the new villain searching online for "uniforms" last week.

The second uniform this man donned was that of a Radley employee, as we saw him leave the hotel shortly after the Liars did some investigating into Charlotte's death and their new tormentor. The man left the hotel and got into a black town car that had been following the Liars all episode, at which point he did something totally unexpected — he took his face off. Well, that's what it looked like, As it turned out, the face we saw twice was actually a very real looking rubber mask, which the mysterious villain removed in the car. Of course, because this is Pretty Little Liars, we didn't get to see any of the face underneath it.

While these disguises don't offer any additional clues into B's identity, they prove that he is living up to the promise he sent in a text to Spencer and Caleb: "I don’t lurk in the shadows, I hide in plain sight." And somehow, that's even scarier. For more on this season's villain and everything else PLL, check out Bustle's podcast Taking This One To The Grave.