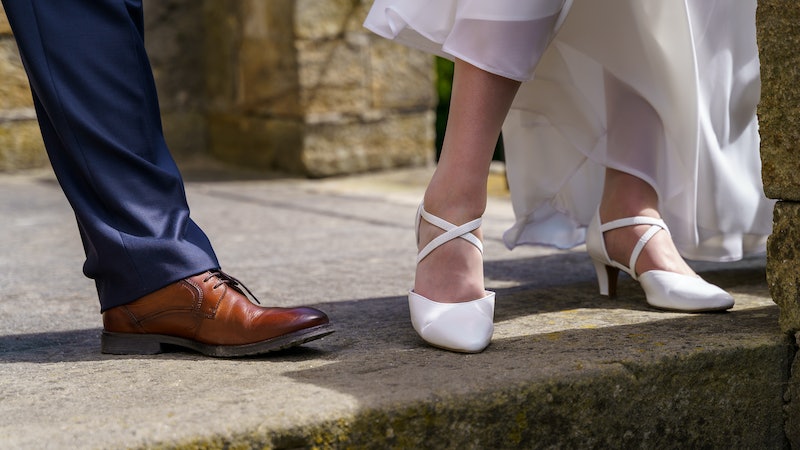 For most people, there are few things more romantic than imagining their ideal wedding. However, there are many gendered tropes in weddings we tend to romanticize without even realizing it. It's natural to do this, of course, because there are so many media and historical influences that cement gendered tropes as the norm. Gender based tropes are problematic because they set a strict guideline for what is and isn't acceptable based on something that's actually pretty fluid and diverse for a lot of people. Gender norms, historically, also strongly favor men and put them in positions of power and influence over women. Doesn't sound like the healthiest way to start a marriage, right?

When it comes down to it, you should have your wedding the way you want it. If you stick with something traditional that includes gender tropes, that's OK! If you choose something non-traditional entirely, that's OK, too! The key is that you do what makes you and your future spouse happy. I think gender norms in terms of wedding planning are just interesting to keep in mind while you decide what it is you personally value and what you want to share with your spouse on your special day. Some traditions are rooted in ideas that are decidedly not feminist, which might matter to you or your partner in terms of your enjoyment.

Here are some gender-based wedding norms that we all might be a little guilty of romanticizing:

1. Wearing White on Your Wedding Day

OK, so I know this one isn't going out of style anytime soon. But I think it's important to keep in mind why wearing white on your wedding day became the norm for women to begin with. Queen Victoria got married in 1840 in a white gown, pretty much establishing it as a trend, but she did so mostly because she liked it. Prior to 1840, most people just wore whatever dresses they had, or a fabric they could purchase for cheap, because white material was actually super expensive at the time.

Later, people romanticized the Victorian era and imposed the idea that white wedding dresses signified virginity and purity onto the wardrobe choice. Now, I think whether or not you want to wait until you're married to have sex is entirely a personal decision, but I do think the concept that you can only wear white if you're a virgin on your wedding day places too much emphasis and value on a woman's "purity." The bottom line is that she can have whatever sexual history and make whatever sexual choices she wants — and her worth is never determined by what they are.

2. In Fact, All Wedding Attire Is Pretty Gendered

There are few images which signify a wedding more quickly than that of a man in a tuxedo and a woman in a dress. Now, with same-sex weddings in the mix, there are plenty of people who are changing up this standard. Even still, opposite sex couples have every right to wear what they want on their wedding day: If a woman wants to wear a suit when she marries a man, she should be able to do so without judgment. If a man wants to wear makeup on his special day, why not? The gendered aspect of wedding attire even reaches down to the ring bearer and flower girl, who usually wear outfits which mirror the bride and groom. Cute, sure, but also heavily relying on gender norms when children are still young and susceptible.

3. The Father Giving Away the Bride

For women who are close to their fathers, I think this one can be especially tricky. For many brides, having your father participate in your wedding in such a big way can feel very emotional and sweet. And if you're one of those brides, that's OK! However, the tradition stems from a long line of the patriarchy, and it's something to keep in mind when you envision your big day. Essentially, the concept of the father "giving away" his daughter harkens back to the notion of women as property, thus viewing the marriage as a sort of business transaction. If you do choose not to participate in this tradition (or you ask both your parents to "give you away," or just your mother, for example) the best approach is to be honest, open, and gentle in your delivery.

While plenty of people find this tradition fun, there are a lot of people who find it humiliating. Basically, the bouquet toss is rooted in the idea that the bride can toss her bouquet to pass on her good fortune to others. This sounds nice enough until we remember that the "good fortune" represented by the bouquet is basically finding a husband and getting married. What about finding a career you like, a house you can buy, or the fulfillment of any of your other hopes and dreams? Marriage certainly isn't the be-all, end-all of good fortune.

In the modern day, the bouquet toss is basically an affair in front of everyone at the wedding where single women jump over each other to get the "luck" for getting married next. For some people, this is fun and funny, and that's cool! But it's still worth remembering that the tradition is rooted in the idea that getting married next should be the number one thing on a single's woman mind. There are all sorts of cool things you can do instead of a bouquet toss, such as having a girls-only dance or using the time to honor the loss of a loved one; no need to follow the tradition if you don't want to.

This one, I think, is so clearly rooted in sexism and gender norms I had to save it for last. For those who aren't familiar, the garter toss typically takes place during the reception. Basically, the bride sits on a chair while her new husband removes her garter belt and throws it into a crowd of his single male friends. Often, the groom does this with his teeth, but some people do use their hands. Now, for some couples, this is really funny and light-hearted, and that's OK! For many people, though, this tradition clearly goes back to our culture's fixation with women's sexuality.

In contrast to the bouquet toss, for example, it sends a message to men that their goal is to get women sexually, not necessarily to marry them. It enforces the idea that "boys will be boys," as well as the idea that women's sexuality is a conquest — all of which is extremely problematic.

All in all, I think your wedding should be about you and your spouse. If you want a wedding draped in tradition, that's your prerogative, and people shouldn't shame you for it. That said, I think it's important to think critically and carefully about the way gender norms influence our lives in general, and weddings are no exception. There are tons of non-traditional wedding tips out there if you do choose to explore options aside from the traditional. And yes, there are even wedding options for men that aren't based in gender norms, including bro-dal showers. Have fun!

More like this
Amanda Gorman Shared A Powerful Message On Meghan Markle’s Penultimate Podcast
By Darshita Goyal
Here's How To Support Jewish People Amid Rising Antisemitism
By Hannah Orenstein
Emily Ratajkowski & Pete Davidson's Astrological Compatibility, Revealed
By Nina Kahn
Prince William Condemns “Unacceptable” Comments Made To A Black Guest At Buckingham Palace
By Shahed Ezaydi
Get Even More From Bustle — Sign Up For The Newsletter