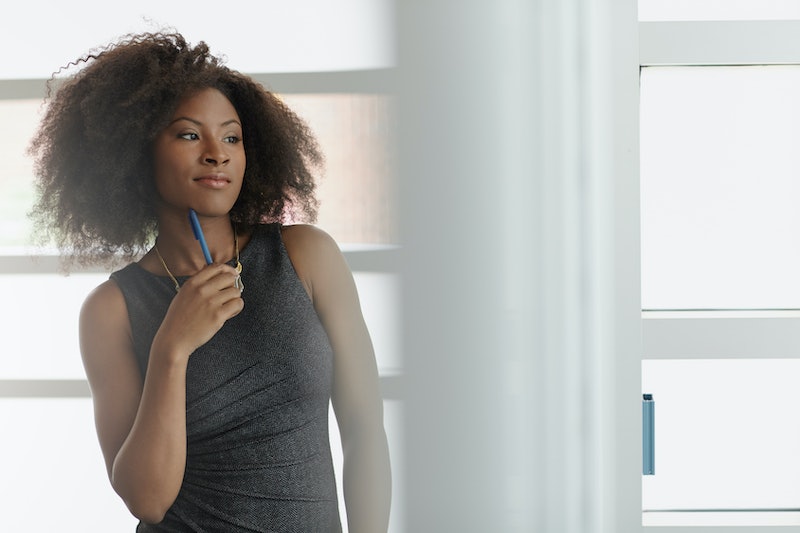 There's no shortage of gendered workplace tropes out there — ever since women began entering the workforce in unprecedented numbers, and especially once women started breaking into traditionally masculine industries, people have scrambled to reassert the gender binary. Sexism in the workplace can take many forms; beyond hot button topics like the wage gap and sexual harassment, it can also manifest in the stereotypes we impose on women (and men) in the workplace.

Whether or not we believe in such stereotypes individually, there's no denying that society as a whole certainly subscribes to them. Why else would we see tropes like the "ruthlessly ambitious woman" and the "brilliant yet philandering workaholic" on screen again and again? Our media serves to reinforce these tropes, of course, but they weren't created out of thin air. They're based in our own ideas of gender norms that many accept at face value; in fact, we've even learned to romanticize some. Take Mad Men 's Don Draper: For all that he's an alcoholic, a serial cheater, and an all-around manipulative narcissist, we're still expected to root for him by virtue of his brilliance — but if he were a woman, such negative attributes would likely make the character a villain rather than an antihero.

Although they may seem harmless by themselves, the ubiquity of gender-based workplace tropes can go a long way toward reinforcing gender norms, which ultimately hurt everyone. Let's take a look at five gendered workplace tropes it's time to stop perpetuating.

We've come a long way since the '50s, when the typical career path for women involved nursing or teaching until she got married and became a housewife. However, attitudes toward women in the workplace haven't changed all that much since then — not only are women perceived as less competent from the start, we're also assumed to be less committed to our careers than men. Presumably, this stems from the stereotype that women are merely working to get by until they marry someone who can support them and start a family. Unfortunately, this trope has consequences even when a woman continues working after having children: While parenthood actually helps men in their careers, research have shown mothers are actually penalized for having children.

On the flip side, some women are perceived as too committed to their work. Just like Don Draper, the Career Woman is ambitious, talented, and ruthless. Unlike our male antihero, however, these traditionally masculine traits make her an object of derision rather than celebration. Miranda Priestly of The Devil Wears Prada is the pinnacle of the Career Woman in fiction, but you just have to look at the press surrounding powerful women like Hillary Clinton to see how the trope plays out in real life.

3. The "Philandering Yet Brilliant Workaholic"

By now, we've mentioned the "brilliant asshole" trope multiple times, usually in the context of how much we love our antiheroes. However, it's important to note that although society loves a flawed (male) protagonist, romanticizing this trope is yet another example of how toxic masculinity can be. We can all agree that alcoholism, misogyny, and sacrificing relationships for a career may be characteristics of an interesting character, but in real life they're probably a ticket to dying miserable and alone. Unfortunately, we celebrate the Don Drapers so much that many men internalize these standards.

4. The "Woman Who Sleeps Her Way To The Top"

When a man is in a position of power, it's assumed that he got there on his own merits — staying late, hours of networking, and so on. In contrast, women in power are scrutinized in ways that men never are, usually with the underlying assumption that she was given the position rather than earning it. This distrust is never more evident than in the trope of the woman who slept her way to the top, as if she couldn't get there without seducing men on the way. Ugh.

At its core, the "brilliant slacker bro" is the "philandering workaholic" trope of the new millennium, minus the suaveness and sophistication that characterizes the latter. The "brilliant slacker" drinks energy drinks, works a minimum of 90 hours a week, and doesn't get laid often, because he's too much of a jerk to deign to talk to women — and therein lies the problem. The "brilliant but lazy" trope is strictly male territory; even in fiction, if a woman were to neglect personal hygiene, screw over her closest friends, and otherwise comport herself like (fictional) Mark Zuckerberg in The Social Network, she wouldn't have nearly as many career opportunities.

The sole exception to this, of course, is Lisbeth Salandar in The Girl with the Dragon Tattoo, praise be her name.

More like this
Naomi Osaka & Emma Raducanu’s Experiences Have Inspired A New Amazon Show
By El Hunt
25 Things I've Reduced My Life To, In Addition To WFH In My PJs
By Ginny Hogan
The Spiritual Meaning Of The August 2022 New Moon
By Nina Kahn
Your Daily Horoscope For August 12, 2022
By Mecca Woods
Get Even More From Bustle — Sign Up For The Newsletter