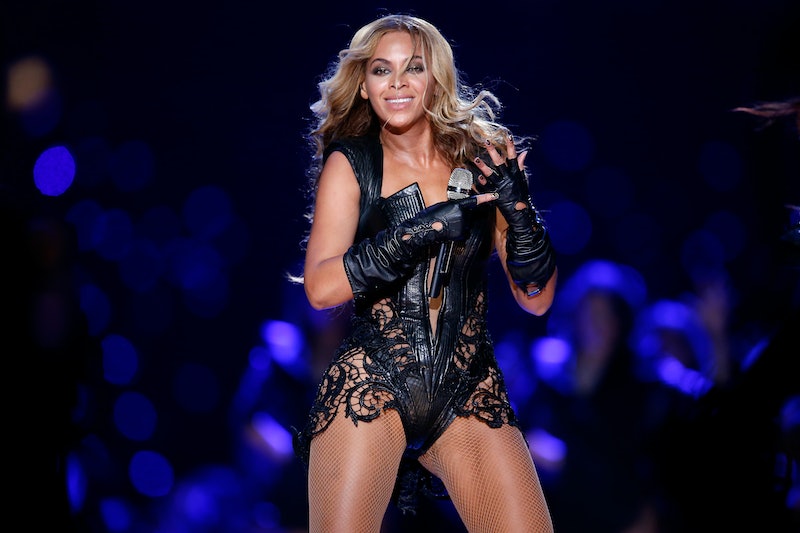 The last time that Beyoncé performed at the Super Bowl, she put on a show so magnificent that she shut down the power. (OK, so Beyoncé didn't actually cause the outage, but that didn't stop her from going down in history for it.) Now that Beyoncé will perform at the 2016 Super Bowl alongside Coldplay and up to four other mystery performers, people can't help but wonder, well, what she'll be doing there. While Chris Martin has revealed that Beyoncé's appearance is their way of honoring the past of the Super Bowl — as the fiftieth Super Bowl's half-time performance will focus on the past, present, and future for the show — that doesn't tell us anything about what she'll be doing. Considering her last album came out three years ago in 2013, what will Beyoncé perform at Super Bowl 50? Rumors are heating up.

Fan Twitters devoted to the singer have claimed that she will perform at least one new song during the show, her first new song since the release of "7/11" and "Ring Off" from the Platinum Edition of BEYONCÉ that was released in 2014. (Unless, of course, you count her guest vocals on Naughty Boy's "Runnin' (Lose It All)" and Coldplay's "Hymn For The Weekend.") There have also been rumors that "Hymn For The Weekend" will not be one of the songs performed during the half-time show, which means that Beyoncé's performance might not be tied to Coldplay's performance in any way.

Sure, this could be an opportunity for her to remind us of the same songs that people have been listening to for the last three years, but the Super Bowl is kind of a huge venue to perform three-year-old songs, you know? Beyoncé puts on more of a show than that. (See that Super Bowl power outage I mentioned earlier.)

However, there are other rumors that Beyoncé's performance will be about much more than just music. After all, the rumors that Beyoncé is pregnant with her second child haven't slowed down, and make up pretty much the highest gossip typically floating around about Beyoncé — second only to a rumor that she and Jay Z are on the cusp of a divorce. There are many fans who believed that the real reason between Beyoncé's slightly unusual performance at the Super Bowl, despite not having any new music out, is because the pop star plans to announce her pregnancy on the Super Bowl stage, similar to the way she announced the pregnancy of Blue Ivy at the 2011 Video Music Awards.

If that's the case, then it won't matter what she performs; people will hardly be focusing on the 900th time they've heard her sing "Drunk In Love" on a stage if she clutches a baby bump while she does it, you know? At this point, there have been rumors that Beyoncé has a new single called "Formation" coming out, and there have been rumors that Beyoncé and Jay Z will release a joint album, so it's really anyone's guess what she'll be belting out when she struts onto that Super Bowl 50 stage. The only thing we can say for sure is that it's going to be awesome.

More like this
Everything To Know About Taylor Swift’s 10th Studio Album, 'Midnights'
By Grace Wehniainen and Jake Viswanath
Mariah Carey Is Releasing Her “Lost” '90s Grunge Album
By El Hunt
Pro Footballer Zander Murray Is "Blown Away" By Support After Coming Out
By Sam Ramsden
TV Schedules Undergo Major Changes For The Queen's Funeral
By Sam Ramsden
Get Even More From Bustle — Sign Up For The Newsletter