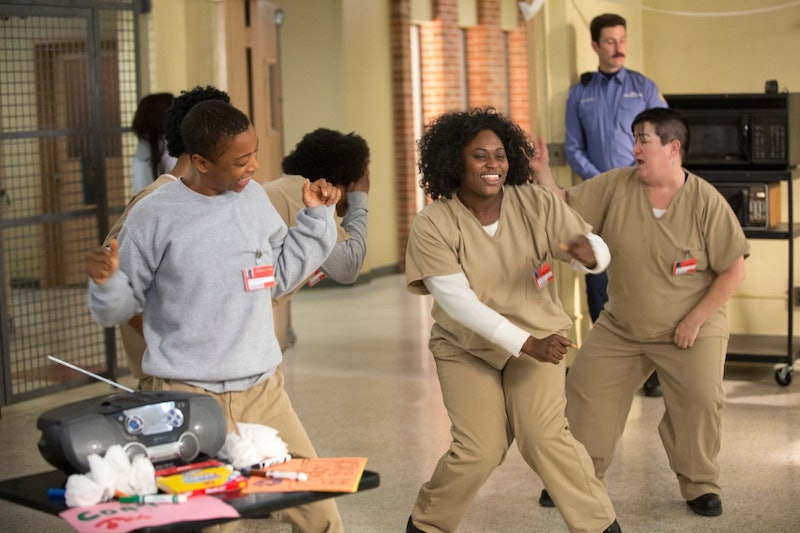 I've never been excited at the notion of spending more time behind bars, but the news that Orange is the New Black is renewed through 2019 is just about to change my mind on that. Because yup, you heard that right: The Netflix show isn't subject to the rules of some of the network dramas out there, that get renewed one piddling season at a time — they're confident approving three more seasons in one fell swoop, and the streaming service doesn't mind saying so. And honestly, this is what we needed. I won't look a gift horse in the mouth when one of my favorite shows gets renewed for "just" one more season, but this is so much better.

With a show like OITNB, knowing there are three more seasons in the can lets you relax and settle in a little; the writers aren't going to have to unexpectedly wrap it up all of a sudden, or kill off a character who agreed to another project because they didn't want to gamble by saying "no" only to find out months later that the show they'd turned it down for was canceled. At the end of the day, the job security and viewing security (it's a thing, I've decided) provided by knowing we get another 30 episodes (eeeee!) of this genius show are invaluable. And here are the specific reasons why we need them.

So Many Inmates Don't Have Fleshed-Out Backstories Yet

Um, specifically the entirely new crop of women who were moving in a the end of the Season 3 finale. Pretty much every existing Litchfield character is about to get a bunkmate, so if it took us three years to get to know the originals, it should take us at least three to follow up with all the newbies.

Remember, she's in the midst of that face-off in the greenhouse, and every other inmate is literally outside the fences? I'm crossing my fingers, but it's not looking good for her. To my knowledge, former drug bosses don't especially enjoy being ratted out.

Ya girl mentioned in Season 3 that she only has six to 12 months left on her sentence, so one of these days, she might actually be getting out, right? I'd love to have a season or two to be able to appreciate Litchfield without her constant presence. I have nothing against Taylor Schilling — she kills it on this show. But she's just the closest thing to a star in this ensemble cast, and I'm ready to see someone else get a moment in the sun. (Cough cough, let Sophia out of the SHU, because I need more Laverne Cox in my life STAT.)

It Gives Bennett A Chance To Redeem Himself

Three seasons just might be enough to make up for what he did. SMDH.

And you know, just about a million more reasons why three more seasons of this show is what we want and deserve and everything is marvelous. Hurray!