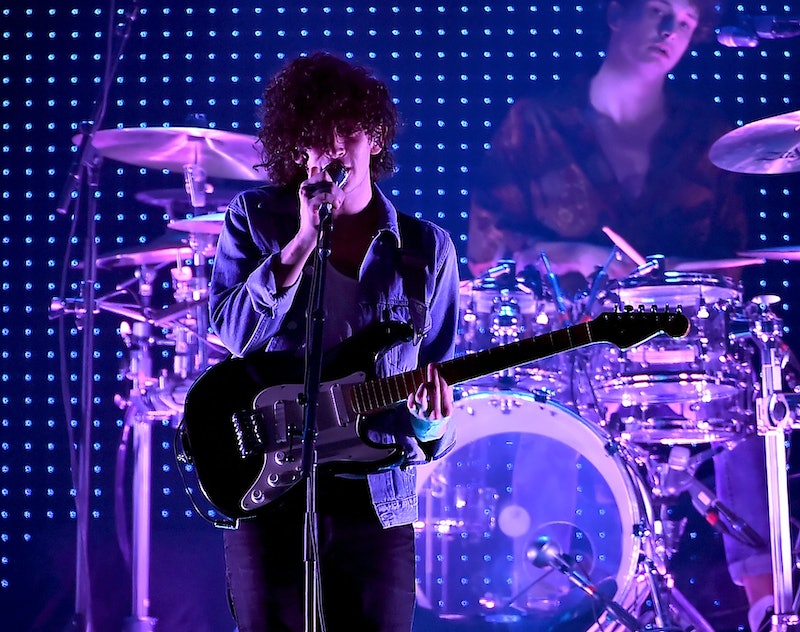 If you saw the lineup for Saturday's episode of Saturday Night Live , focused on the name of the band performing alongside host Larry David, and thought to yourself, “Who is The 1975?” then don't worry — you’re probably not alone. Although The 1975 is a pretty popular band by now (some of their videos on YouTube have over five million views), this English alternative rock band is only just recently making a splash in the U.S. Before now, they have been wildly successful in the U.K.. Their self-titled album, for example, hit number 1 on the U.K. Albums Chart back in 2013.

So, now that they're set to appear on SNL, it's worth wondering: who is this English band that is about to take the U.S. by storm?

They’re a group of four musicians, all from Manchester, England. There’s Matthew Healy on lead vocals and guitar, Adam Hann on guitar, George Daniel on drums, and Ross MacDonald on the bass. And, guess what? Not a single one of them was alive in 1975 — as they revealed to The Huffington Post, they began making music as teens in 2002. But, it wasn’t until they started writing music that their sound gelled and their star started rising in the world of alternative music.

So, if you want to get to know these guys a little bit better, take a look at some of their most popular songs on YouTube. Either that, or pre-order their forthcoming album, I like it when you sleep, for you are so beautiful yet so unaware of it.

Their banter at the beginning will make you fall in love.

If their music doesn’t win you over, their artistic videos totally will.

This song from the band’s self-titled album shows their roots for sure.

Showcasing their range, this heavier rock song still tugs at the heart strings.

From their forthcoming album, this song shows the band embracing their ‘80s influence.

It’s like Little Miss Sunshine meets Dance Moms and I totally love it.

Get ready for this English sensation to take over the nation.