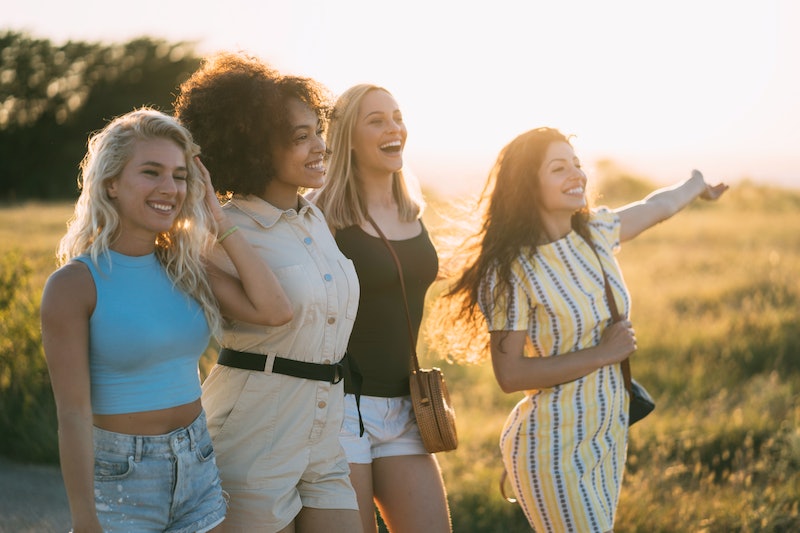 The media has a way of perpetuating gendered relationship tropes, which is as evident in its depictions of friendships between women as it is in its love stories about strong, masculine men and submissive, helpless women. There is obviously nothing wrong with women who are close friends, but the friendships we see both glorified and disparaged on TV, in the movies, and in books are often based on stereotypes. These stereotypes can influence the way women view one another and even block their ability to form genuine, healthy relationships.

Since patriarchal society renders women competitors for men's attention, there's a lot to be said for women's ability to support one another, especially in the face of shared experiences of sexism. As America Ferrera said in a conversation with Gloria Steinem at the recent MAKERS conference,

When I stopped thinking of other women as competition to me and started thinking about them as my partners in life, when that happened for me as a young woman, my whole experience of life changed.

Friendships between women can be life-changing and redemptive, but often, the way the media portrays them doesn't encourage these types of relationships. Here are some gendered friendship tropes it instead perpetuates and how they can affect us for the worse:

From Mean Girls to Clueless, women — especially young women — in the movies often travel in packs, with insiders and outsiders clearly demarcated. Sometimes, this behavior is glorified; who didn't kind of want to be part of Cher's or even Regina George's inner circle? Other times, its downsides are evident, and women are portrayed as backstabbing and catty. Both these portrayals are harmful to women: One holds up an unhealthy relationship model, and the other dehumanizes women who have fallen victim to this concept of friendship.

"Squads" like Taylor Swift's are often cliques under another name. As actress Rowan Blanchard pointed out in an interview with Just Jared Jr., "the ‘squads’ we see in the media are very polarizing. Feminism and friendship are supposed to be inclusive, and most of these ‘squads’ are strictly exclusive.” Taylor Swift and others often show their friends off like possessions, and these friends are too often exclusively white, thin, and attractive. In real life, this can make some women feel like they have to be beautiful and rich to fit in, and it can make others reluctant to venture outside their squads.

Based on the movies and many TV shows, you would think every woman literally had just one friend, besides maybe one male friend on the periphery who allows the audience to constantly wonder if they'll get together. Those who grew up in the '90s may have held Gilmore Girls' Rory and Lane as models of this exclusive two-person friendship, and those who watched the Disney Channel had Lizzie and Miranda in Lizzie McGuire and Raven and Chelsea in That's So Raven. Kids watching Disney today have Riley and Maya in Girl Meets World. And the movies are full of charming but nevertheless limited duos like Romy and Michele.

These women are often hilarious and heartwarming together, but they also can give us an unrealistic view of what friendships are like. In reality, one friend usually can't meet all your needs, and we rely on different friends for different things. In addition, friendships shift, and your best friend "forever" right now may be a less-close friend in a few years. Putting all your eggs in one basket can make you less resilient in the event of a friend breakup. The "BFF" trope can also encourage people to rank their friends, putting one above all others, which is hurtful to the rest.

Another problem you'll often see with this trope is that it includes a white woman as the protagonist and a woman of color as a sidekick (like Clueless' Dionne), who is thrown in to check a diversity quota rather than made a protagonist herself.

Patriarchal society can make women view one another as competition, and depictions of women like Gossip Girl's Blair and Serena portray this competition as inherent to friendships between women when it shouldn't be. Blair and Serena are neck-and-neck for the title of most popular girl in school, and they're often envious of one another over boys or attention. The stereotype that women can't get along because they're always competing has even led some to argue against gender equality. Advice columnist Amy Alkon recently wrote that women aren't suited to be leaders in the workplace because evolution "leads to some 'very confusing' (and often ugly) relationships, with women as covert competitors, using tools including gossip and social exclusion to push down other women, especially any who dare to stand out." And this is exactly why the media stereotypes and real-life pressures embodied by Blair and Serena have to go.

Of course, there is nothing wrong with having friends who happen to be female. And there is nothing wrong if you all happen to like "feminine" things. But we need to get rid of the idea perpetuated by shows like Sex and the City and Desperate Housewives that women should have their "girlfriends" for spa visits and gossiping and their "guy friends" for watching sports (or, when it's a gay man, fashion advice). This trope closes women off from emotionally rich but non-romantic relationships with men, since the stereotype that only female friends can have sentimental heart-to-hearts makes romance seem like the only option if a woman and a man want to be close. The division of friend activities by gender also excludes gender-nonconforming and non-binary people. Friendships are individual and should be valued for what they are, not for any stereotype you can project onto them.

More like this
Amanda Gorman Shared A Powerful Message On Meghan Markle’s Penultimate Podcast
By Darshita Goyal
Claire Foy & Rooney Mara Revisit A Devastating Tale In 'Women Talking'
By Bustle UK
Here's How To Support Jewish People Amid Rising Antisemitism
By Hannah Orenstein
Emily Ratajkowski & Pete Davidson's Astrological Compatibility, Revealed
By Nina Kahn
Get Even More From Bustle — Sign Up For The Newsletter