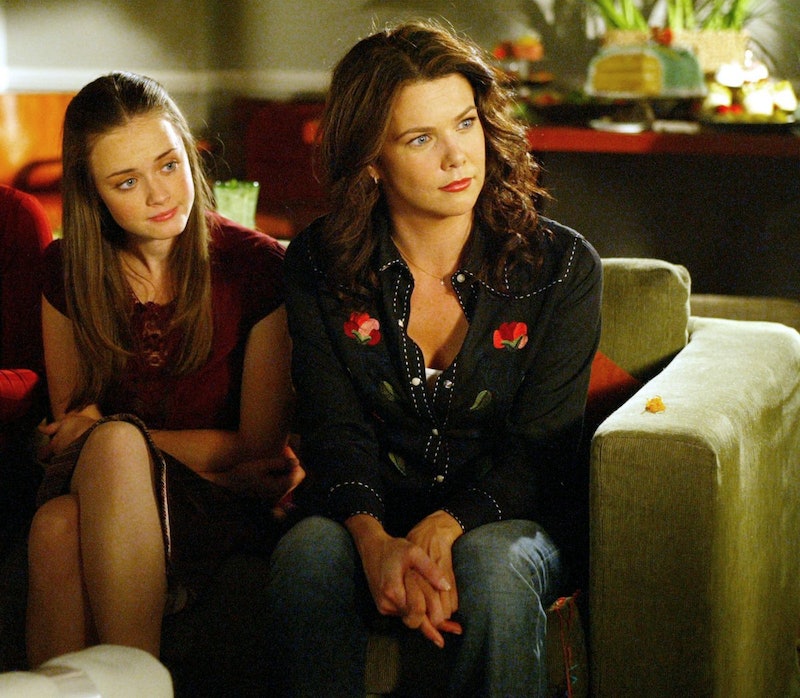 The good news just keeps on rolling in: Yanic Truesdale has confirmed Michel is back for the Gilmore Girls revival with not only the best set pic yet... but also the first Gilmore Girls revival set picture ever. Guys, if you're crying, don't worry — I totally am too. Truesdale tweeted a photo of himself and Lauren Graham in the Dragonfly Inn. That's right, Michel and Lorelai are back together again, and it definitely feels good.

In case you are starting to lose track of who is definitely signed on for the Netflix reboot so far, Truesdale's Michel is joined by Lauren Graham (Lorelai), Alexis Bledel (Rory), Kelly Bishop (Emily), Scott Patterson (Luke), Keiko Agena (Lane), Matt Czuchry (Logan), Sean Gunn (Kirk), and Tanc Sade (Finn) — so far. There are still plenty of Stars Hollow residents whose returns have yet to be confirmed, but you can expect announcements to continue to come pouring in now that filming is actually underway.

For now, let's all focus on how amazing it is going to be to have Michel back in our lives again. Think of all the new sarcastic one-liners in your future! Michel always added a delightfully sardonic touch to the warm and cozy world of Stars Hollow. His humor, his style, and his zings were essential parts of the Gilmore Girls universe. The revival just wouldn't have been the same without him. Here are 11 reasons why Michel's return is basically the best news ever:

1. The Show Wouldn't Be The Same Without His Sarcasm

Gilmore Girls is a show full of amazing lines, but Michel was responsible for at least half of them. Almost everything that came out of his mouth became instantly quotable. You need his disdain for the mundane in your life again.

2. The Michel And Lorelai Dynamic Is A Must-Have

Michel and Lorelai are the ultimate odd couple. From the very first episode, their banter has been on point, but they are also capable of offering each other some truly moving emotional moments, like when Lorelai realized how much Michel admires her in the Michel wins an RV on The Price Is Right episode.

The Dragonfly Inn is one of the best sets on the show, and it is practically Michel's home base. Knowing he's back means there will be no shortage of time spent at Lorelai's beloved Inn.

4. Someone Has To React To All The New Trends

Crossfit, juice cleanses, the current state of Beyoncé — there is only one man who will be able to discuss all of the latest health and Beyoncé news, and that man is Michel.

5. There Has To Be An Update On Chin-Chin

Hey, you know you want a status update on Chin-Chin! That dog was the cutest.

6. You Need Michel To Teach You New Ways Of Avoiding Work

Michel is the Yoda of work procrastination and you know you have missed learning from his work avoidance ways.

7. No One Can Offer Up Burns As Sweet As Michel's

Michel's burns were so good, you didn't feel them until he was already sauntering away. His takedowns of the Inn's patrons were all instant classics.

The few times Emily and Michel crossed paths, magic happened. These two need at least one more scene together because they just got each other better than anyone else did.

9. Who Would Lorelai Tease?

Not all Gilmore Girls styles were created equal. While some of the character's looks have become horribly dated over time, Michel always looked super GQ. His classy style brightens up every room he is in.

11. The World Needs To Know What Michel Is Up To Now

Did Michel get a promotion at the inn? Is he still madly in love with Celine Dion? Is he still chasing all the fads? What is 2016 Michel like? You need the answers to these questions in your life.