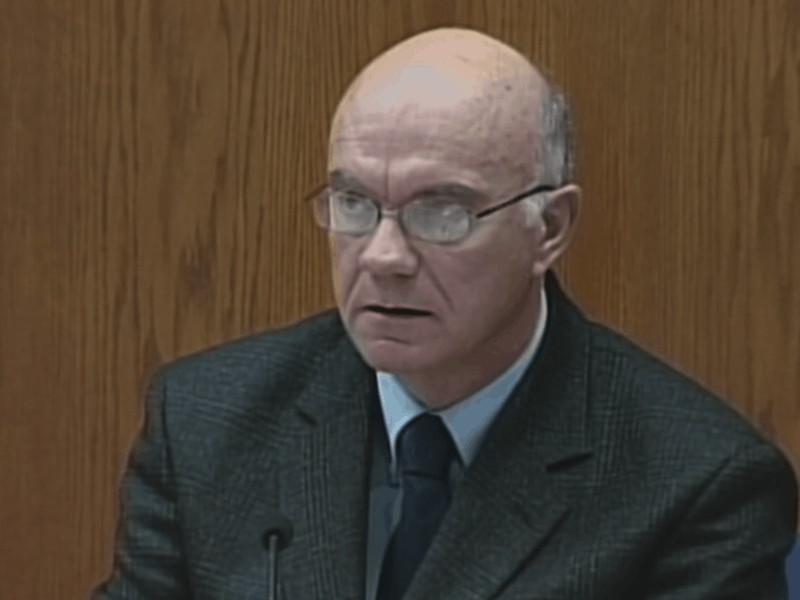 For the first time since Making A Murderer captured the attention of countless Netflix subscribers and made Steven Avery a household name, one of the officers who has been accused of wrongdoing in the murder case has spoken publicly on the matter. Local CBS affiliate KPHO in Phoenix, Arizona, tracked down Manitowoc County Sheriff's Lt. James Lenk and asked him to defend himself against allegations of tampering with and planting key evidence in the case. (Lenk and the county police department have always vehemently denied such allegations.)

A quick refresher: Avery spent 18 years in prison for a rape he did not commit. He was exonerated with DNA evidence in 2003, and then sued the county sheriff's department for $36 million claiming Lenk and fellow officer Sgt. Andrew Colborn had information that could have resulted in his exoneration earlier. While the case progressed against the county, Teresa Halbach was killed. The investigation into her death centered on Avery.

Because of the pending case, Manitowoc County handed the investigation over to a neighboring county, but Lenk and Colborn were still involved in the investigation. Lenk found a key piece of evidence — Halbach's car keys — in Avery's house after the house had been searched six times by other officers. He was also accused by Avery's legal team of planting Avery's blood in Halbach's car. Manitowoc County officials adamantly deny any allegations of wrongdoing during their investigation.

After the documentary aired, speculation as to Lenk's whereabouts arose as he was no longer listed as an employee with the sheriff's department. It would appear he is retired and living in Arizona, specifically Green Valley, a community of nearly 24,000 people south of Tucson. That's where KPHO's Donna Rossi tracked him down to ask him about the fallout from the Netflix series.

CBS 5 News: Mr. Lenk, given the popularity of the documentary why won't you even defend yourself sir?

Lenk: There's nothing to defend.

CBS 5 News: Do you stand by your testimony?

Lenk: Just read the court transcripts. That all you've got to do.

CBS 5 New: Do you have anything to say about the hoopla surrounding the documentary?

Lenk and Colborn both denied the allegations of planting evidence during the trial. Regardless, cast as the bad guy by the documentary, Lenk has come under fire online. Someone posing as a member of the hacktivist group Anonymous taunted the sheriff's department and Lenk, claiming they had evidence that would show misconduct. It later became clear they likely had no connection to the group and were just trolling Lenk and the sheriff's department. The incident is just one of the more extreme examples of reactions online to the case and specifically the officers and prosecutor involved.

Former prosecutor Ken Kratz, who after the case was forced to resign for a sexting scandal involving a domestic abuse victim, has been more vocal about the case. He plans to write a book on it and has called accusations of evidence tampering impossible, although he would have liked the Manitowoc County Sheriff's Department to have taken a smaller role in the investigation. "Steven Avery committed this murder and this mutilation, and Steven Avery is exactly where he needs to be," he told The New York Times.

He won't be the one deciding that, though. Avery's new lawyer Kathleen Zellner continues her quest to exonerate Avery and is documenting her work on Twitter. One of the big focuses? Planted evidence.