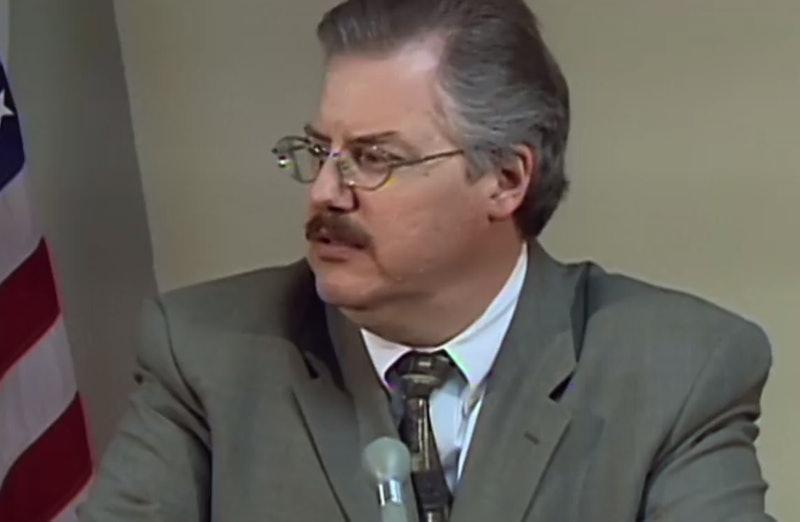 Steven Avery got to tell his side of the story in Making a Murderer, and now former District Attorney Ken Kratz is going to tell another side of Avery's case — although supposedly not his. The man who prosecuted Avery has said he will write a book on the Avery case, but the point of view he claims he will represent is Teresa Halbach's.

If you haven't seen the series, Halbach was the 25-year-old photographer whose murder Avery and his nephew Brendan Dassey were charged and convicted for. Kratz told local Wisconsin news channel WBAY that he's "finally grateful to tell the whole story." And why did he want to write a book? "Because the one voice forgotten to this point is Teresa Halbach," he told WBAY.

Ironically, Hallbach's point of view might be his second-choice option. Kathleen Zellner, an exoneration expert that was recently named as Avery's new attorney, tweeted a letter allegedly penned by Kratz trying to get a confession out of Avery. Why? So he could write a book. In the letter he offers to write a tell-all confession.

Since Avery's not interested in confessing, Kratz points out what other famous, convicted murderers have done. "The difference between you and famous convicted murderers from the past is they told their whole truthful story to someone, who then wrote a book about what actually happened and people got to understand both sides. I was willing to do that for you," Kratz wrote.

In addition to representing Hallbach's "voice," Kratz may want to clear his name. Page Six reported Sunday that he was working on a book proposal and that he wants to correct the impression that he's a villain. "If I was spoon-fed only what the Netflix documentary wanted me to see, I'd come to exactly the same conclusion. I'd be outraged," he told Page Six.

He said he's been thinking about writing a book for 10 years, but added that he's "a trial lawyer, not a writer." He also brought up Hallbach's memory with Page Six. "This was a case that included the murder and dismemberment of a 25-year-old woman. It's not fair to her memory, or to her family. They deserve some closure," he said.

In his new career as an author, Kratz will be represented by David Vigliano, a New York City-based literary agent. Kratz will, however, not give up his day job. He told the news channel that he will remain in private practice and attend to his existing clients.

His law firm, though, has seen better days since the release of the Netflix documentary series. Angry viewers took to his Yelp page to express their discontent. The results were not pretty. Yelp has since suspended the page to begin a "cleanup process" in which they remove posts who don't reflect the views of real clients.

Some of the comments mentioned his 2010 sexting scandal — the big reason he no longer works as district attorney of Calumet County. He plead no contest to six counts of misconduct when the Associated Press unearthed racy text messages he had sent to a domestic abuse victim (while he was prosecuting her boyfriend).

Kratz later claimed sex and prescription drug addictions were to blame. He told comedian Jena Friedman for Gothamist last week that after seeking treatment for sex addiction and narcissistic personality disorder, he's a whole new man (and weirdly a Cancer instead of a Leo).

Whether or not he's a changed man, you can get a better idea of what makes Kratz tick after his book comes out. He told BuzzFeed it would take him about four months to write.