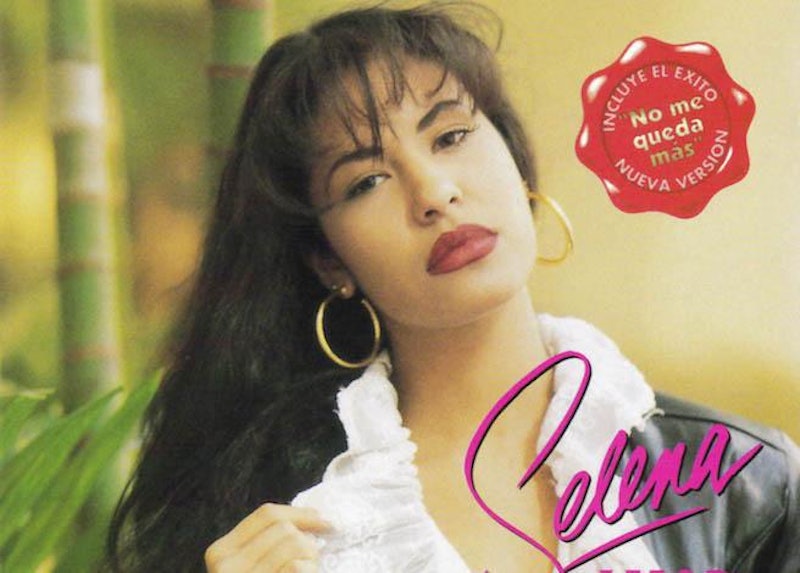 One of my first memories involves watching the news. I was sitting in my dad's living room, my Polly Pockets splayed on the floor around me. An anchorwoman came on to tell the public that Selena Quintanilla-Perez had died. She'd been killed; shot by someone who knew her no less.

I heard about Selena's death before I ever heard her music, my 4-year-old self too young to understand the implication of her passing or the legacy she'd leave behind. But looking back, it was the first time I was introduced to a lot of difficult concepts. Like the idea that someone you loved could hurt you. That life wasn't bullet-proof. That someone who looked no older than my young sisters could die, too. That someone kind of like me (an Hispanic American kid growing up in the States) could be... something. Maybe anything.

When I recently heard that Remy Ocampo and other Selena fans were petitioning Mattel for a Selena Barbie, I was overcome with a sense of hopefulness. The petition couldn't have come at a better time, really, with the upcoming launch of the MAC + Selena collection and Mattel's recent introduction of curvy, petite, and tall dolls in a range of skin colors and styles. As Ocampo wrote in the landing page of her Change.org petition, "[Selena] was a pioneer for Latin women who helped break down racial and sexist barriers in the entertainment industry." So what better time to make a Barbie in her likeness than when Mattel is seemingly trying to diversify its line-up of dolls?

My excitement at the prospect of a Selena Barbie is both political and personal. She was the first female artist to break into Tejano music — a genre that, up until Selena's massive success in the later '80s and early '90s was reserved strictly for men. She was a Mexican American who defied a lot of odds, combatting sexism in the Tejano world and the music industry at large. By sporting bedazzled bustiers despite coming from two cultures that were (and arguably remain) all-too-quick to chastise women for wearing "revealing" garments, designing her own clothing line, being the first Tejano artist (and a woman at that) to achieve gold record status for her 1990 album Ven Conmigo, and doing it all by age 23, she proved herself a strong and necessary voice for women's empowerment. As Jennifer Lopez (who played Selena in the 1997 biopic) has said of the late artist, "The grace with which she handled the business, the grace with which she handled her life, the humor," are also among the many reasons to admire her.

Although Mattel has made Latina Barbies in its 50+ years of doll production — including Shakira and J. Lo-inspired Barbies and dolls modeled after Latin archetypes — a Selena doll would celebrate the woman many of those icons list as inspiration. Selena came before a lot of the Latina and Hispanic American artists we celebrate today. For many of them, just as for many of us, she was one of the first stars who seemed to celebrate her culture unapologetically and encourage us to do the same.

On a more personal level, Selena's passing led to my childhood self's piqued interest in the star. I'd spend chunks of my formative years listening to my mom's copies of Ven Conmigo (Come With Me), Amor Prohibido (Forbidden Love), and her debut album Selena, dancing to "Como La Flor" in our kitchen while learning about Cumbia and Salsa and Merengue through the mish-mash of genres in her songs. And even though I didn't look like Selena, per se — my skin always more fair than my Colombian cousins, and my height (a product of my father's Eastern European ancestry) making me stand out from the crowd whenever I was in the company of my Hispanic relatives or friends — I still felt a certain sense of kindredness with her.

The color of my skin has granted me a lot of privilege in this world. I am a Latina, but I don't look like the narrow idea that most people might have in their heads about what a Latina looks like. Folks very rarely assume I speak Spanish, which has led me to being able to listen in on more than one inappropriate conversation in my years. I've lived predominantly in the States for much of my life, so my skin color has meant I've been free of a lot of the racism and stereotyping that's still a part of the daily lives of many in a country that still can't seem to sort out its race relations. But I'm still an Hispanic American. I still identify with much of my Colombian heritage — including the culture's general stance on familial bonds, the politics of music, the importance of striking a balance between work and play (admittedly leaning towards play), and the power of a delicious arepa de choclo. Selena was the first celebrity who helped me learn how to strike a balance between living in the United States while holding onto my roots.

Selena was also far curvier than any celebrity I'd see on TV until far later into my adolescence. She wasn't fat, by any means. But she had hips and a butt that stuck out and thighs that seemed to touch. Around age 8 or 9, I started gaining weight and hearing all the mixed messaging the universe is never too shy about distilling when it came to weight's relationship to health. I started being told by family that I had to lose my pancita so my body could match my face. I started being lectured on the importance of being smaller than my future boyfriend, while simultaneously being handed plates of beans, rice, pork rinds, and bowls of mondongo.

In the 1997 biopic, Selena (played by J. Lo) has a little rant to her lead guitarist (and eventual husband) Chris about her diet, noting that when the press asks her about how she keeps her "trim figure," she tells them that she eats medium pizzas and drinks Coke and never exercises. I remember watching that scene when I was 10 years old, and being so glad that a woman was acknowledging a love of food. I have no idea if Selena — the star — said those words, or had that diet, or was equally unapologetic about eating junk food, but I know that watching that scene was the first time I felt unashamed about liking cookies.

In the Selena Barbie petition, Ocampo noted, "There has yet to be any curvy Hispanic barbie dolls in any Barbie line and we think Selena is a perfect candidate for that kind of representation." I would have to agree. I'm willing to bet that for a lot of Hispanic American Millennial girls growing up curvy, myself included, Selena was one of the first celebrities who validated our existences. She was definitely the first curvier woman I knew to openly love fashion, and wear all the clothes one might've seen on Paula Abdul, Madonna, or any one of the "heroin chic" babes whose aesthetic began to be "the thing" to have in the '90s.

Selena's outfits were always theatrical. There were ruffles and diamonds and jewels and feathers and colors and big trains and all things eccentric and weird. Seeing J. Lo killing it in all of the above, and then finding the original versions of the outfits that Selena herself sported, gave me a signal that it was OK to be curvier and want to experiment with fashion in ways that were totally outside the box. As I got a little older and fatter, I was bombarded with all these plus size fashion rules. They were rules I'd follow for a long time, because I felt like I had to. But eventually, I'd learn that the only style rule I had to adhere to was to wear whatever made me happy. Voices like Selena's helped me get there.

The Queen Of Tejano remains one of the most influential Latin artists in history. She remains a source of inspiration for musicians who have come after her, for young Latinas with big dreams, and for anyone who looks or feels remotely different to the mainstream images of aspirational beauty popular at the time.

Personally, I spent the ages between 5 and 18 living mainly in a small New Jersey town that made it feel like segregation was still legal. It was a town where my skin granted me some privilege over the two Mexican kids and one other Colombian I went to school with in a student population of over 1,000. But it still segregated me from the majority. Throughout all those years, and for all the years thereafter, Selena was someone who made it feel like I was OK. Someone who made it feel like my heritage, my body, my love of style, my musical preferences were all OK. It blows my mind to think that she was younger than I am now when she was killed by the founder of her fan club. It blows my mind to think of all that she could've accomplished and achieved if she hadn't been stolen from the world. But it also blows to mind to think of all she did, and continues to do, for young women the world over. A Barbie in her likeness? Well, that'd just be one more way of honoring a young woman who helped shape a generation of other young women.

Want more inspiration? Check out the video below, and be sure to subscribe to Bustle's YouTube page for more!

More like this
10 Stylish Plus-Size Boots That Will Fit Wide Feet & Calves
By Dominique Norman
Here Are All 703 Outfits Rachel Wore On Friends
By Kat George
Here’s Your Daily Horoscope For November 30, 2022
By Mecca Woods
Bustle Daily Newsletter: November 29, 2022
By Hayley Schueneman
Get Even More From Bustle — Sign Up For The Newsletter