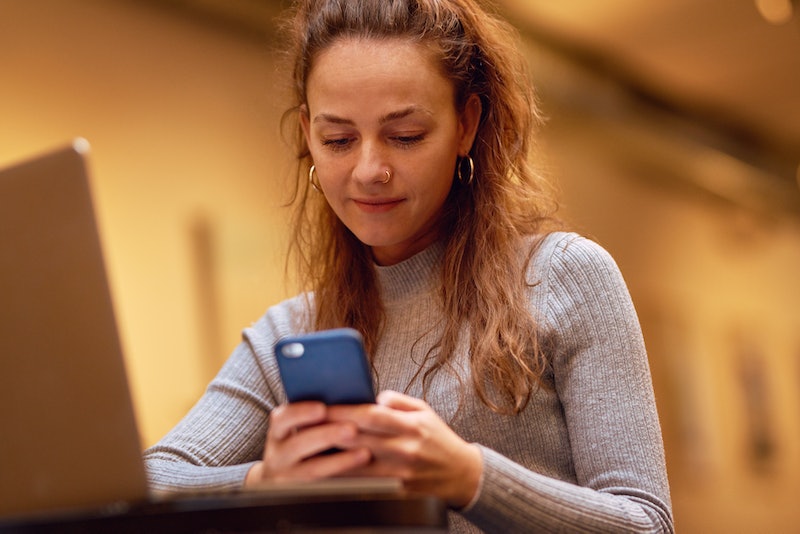 These days, it can feel like there are so many dating apps that you don't know where to start in your online search for love. To help with that decision, Applause recently studied 10,000 app store reviews of 97 apps and their resulting report lists the best and worst dating apps, as well as the ones whose ratings have gone up or down the most over the past year.

Applause,an app quality company, analyzed the language in the reviews to rank customer satisfaction on a 100-point scale. The biggest takeaway? "There are few guarantees in today's modern apps economy, and brands — no matter how popular — need to always delight their users," Applause's Lead Digital Analyst Ben Gray tells Bustle over email. "The dating apps economy is incredibly competitive and increasingly crowded. Brands are releasing new builds at an accelerated rate, even at the risk of releasing a bad build. Tinder — the established leader — is just as vulnerable to hearing from concerned subscribers in the event their mobile experiences don't surpass their customers' expectations."

To prove Gray's point that any app's popularity could fall at any moment, here are some dating apps that have fallen out of public favor over the past year.

Tinder experienced the largest drop in satisfaction this year, declining 10.5 points on a 100-point scale. Perhaps we have bad press to thank for that, with Vanity Fair holding it responsible for a "dating apocalypse." Or may people are just getting tired of the superficiality of swiping left and right largely based on looks. Whatever the reason, more and more online daters are swiping left to Tinder.

Mingle is an app that lets users video-chat privately or in group chatrooms. They can also share videos publicly and accumulate fans. Reviewers have called the app "ugly and buggy" and complained of server error notifications, so perhaps it owes its decline to poor user experience.

The GROWLr app appeals to a very specific demographic: bears. "A Bear is a masculine gay man who belongs to a very inclusive part the gay community," the app's description reads. GROWLr's issues also seem to be largely technical, but it nevertheless has maintained a 4.2 average rating.

JAUMO bills itself as a "chat and flirt app" and can also be used to form friendships. It works similarly to Tinder, with people given the option to like or skip over other users and to share "moments" in the form of photos. Though the app has an average rating of 4.4, one user pointed out that you can't customize your location range, and another called it "the worst possible dating app I've ever downloaded."

Match is one of the oldest and most popular dating apps. It started off as just a website and expanded into app form in 2010. But it's seen better days: With a five-point drop in approval over the past year, it ranked 85th in the 97 apps studied.

The dating app Lulu is unpopular to begin with, ranked 83rd in Applause's study, and its whole concept is controversial: It lets women rate men based on their romantic appeal. It was recently acquired by Badoo, so perhaps we'll be seeing some changes to the app in the future.

Jack'd is a social network for gay men to finds friends and dates. Its description reads, "you’re more than a headless torso," which conjures up a pretty funny image. Several reviewers have mentioned that the app takes up too much storage space. Like several of the apps on this list, it still has mostly five-star reviews in the Android store, but as these apps all go to show, you can't please everyone.