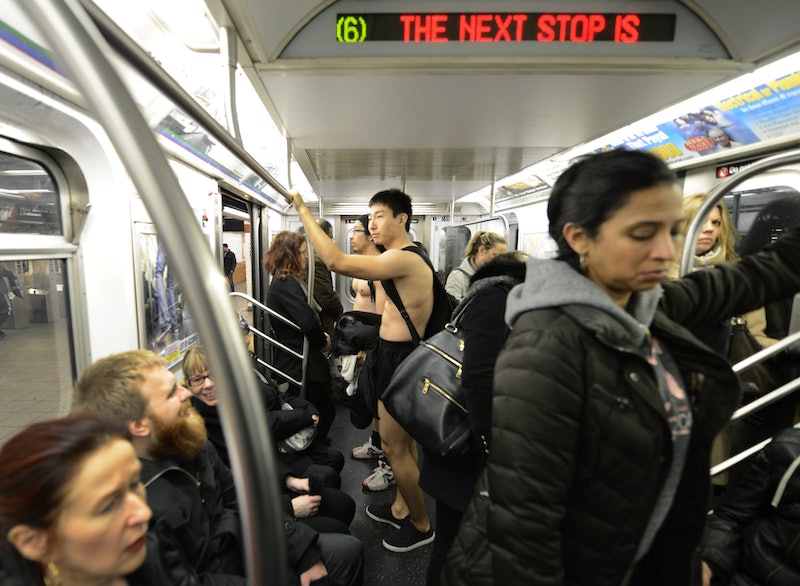 Spend enough time on New York City public transit and you will have no doubt that manspreading is a real thing — but if you're mostly spending time at a desk staring at numbers, apparently you take a different view. In the Econo Monitor, scientists claim that manspreading is a myth based on the incontrovertible evidence of body dimensions and math. It will surprise no one that both statisticians are men — manspreading and mansplaining all in one place! Hey, if either of them has a man bun, we can go for a trifecta.

The argument put forth by Ash Bennington and Mark Skinner, the latter of whom is a data scientist, is that men's shoulders tend to be broader relative to their hips than women's shoulders, which therefore makes it natural for them to take a wider stance with their legs when they sit. They write, "Based on our multivariate analysis of anthropometric parameters across multiple data sets, manspreading appears to be an adaptive strategy that men employ due to innate morphological characteristics."

In other words, it's not that men are being rude, it's just that they are biologically obligated to inconvenience other people. Funny how when men are helpless slaves to biology it's in a scenario in which they get some sort of benefit over other people, whereas when people say women are ruled by biology, it's to say we are inherently weak, domestic, moody, unreasonable, or in some other way naturally deserving of our inferior social status.

Hey, it's just biology that men get to take up extra seats on the subway — and in the boardroom, while we're at it.

To be fair, Bennington and Skinner make some decent arguments. According to data on average body dimensions, the average woman has shoulders which are three percent wider than her hips; men's shoulders, however, are on average 28 percent wider than their hips, and as such, they need to spread their legs wider in order to compensate. It can also lead to a scenario in which, on a crowded subway bench, men can be forced to lean forward as their torsos are crowded out. All of which are perfectly valid reasons for men to not keep their knees pressed together on a subway seat, but rather take a more natural sitting posture (much like, say, everyone else).

Of course, "manspreading" in my experience refers to something a little more egregious than that.

With all due respect to the statistics, I don't think any normal body dimensions make it necessary for men to take up two full subway seats, or spread their legs far wider than their shoulders. And to be honest, I find this argument about as convincing as the "balls need to breathe" argument — which is to say, slightly less plausible that the idea that men are saving room for cats.

Despite Bennington and Skinner's not at all original outrage about the anti-manspreading MTA warnings and the idea that men would be shamed for taking up too much space, the fact remains that most men on the subway don't feel the need to crowd out their fellow passengers, and so I fail to see why we should be making excuses for the ones who do. No one thinks that the minority of people who litter on the subway or shout at fellow passengers or otherwise behave rudely in this public space must be coddled or excused. So why do people get so defensive about the idea that we don't like it when someone takes up two or three times the amount of space that they need? I mean, it's not like feminists are saying that people should be arrested for it, just that it's rude and inconsiderate.

And with all due respect to the stats, if you want to argue that it "may not be a real thing," I can probably disprove that with one trip on the MTA at rush hour.