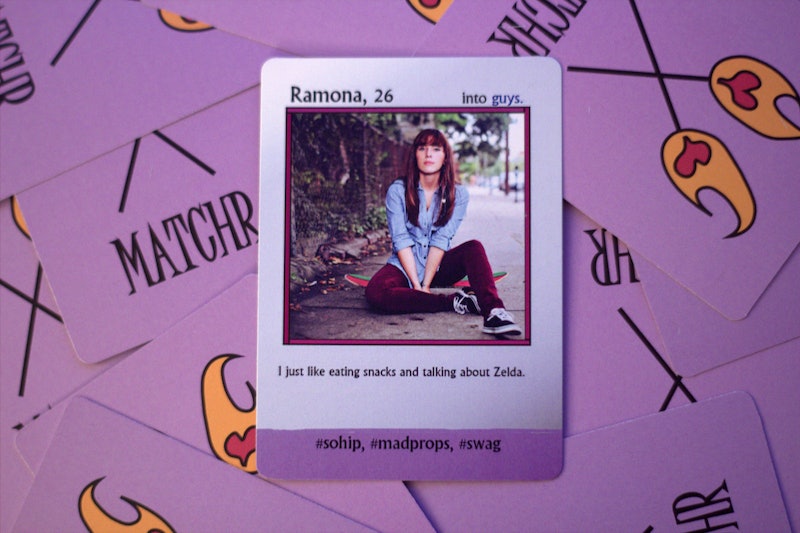 Online dating can be a game-changer, but the slog can also be deeply depressing, necessitating a wade through endless terrible, cheesy profiles. So now we have a Tinder-based card game called Matchr. It's a parlor game that is one part gin rummy, one part Pokémon, with a dash of Cards Against Humanity's sense of humor. "The idea came to me a couple years ago,"creator Mars Incrucio tells Bustle. "My closest friends are mostly women, and just about all of them use Tinder."

He says that he and his gal pals would trade ridiculous screenshots now and then, which made him think of how each dating profile is really just a tiny playing card. "A friend would send me a screenshot of a shirtless dude flexing in front of a mirror or a guy dressed in camo, holding a fish," he says. In return, he would "trade them back a screenshot of a girl doing one of those sorostisquat poses." (I had to look that one up; now I know.) This became its own entertainment in and of itself, removed from the already somewhat empty act of flipping endlessly through dating profiles.

And then the idea hit Incrucio. "I grew up at the height of the Pokémon craze, so I guess something clicked, and I thought that a card game full of singles looking for love just really needed to exist," he says. Though he calls Matchr "a casual card game based on sad profiles I encountered in the realm of online dating," it's all in good fun, which is exactly why he includes himself in the game. "I thought it would be a bit hypocritical if I didn't laugh at myself as well," he says.

Matchr's basic premise is like "Pokémon, but instead of collecting Japanese monsters, you collect hopelessly lonely singles," Incrucio says. To start, each person gets five cards; the person who has been single the longest goes first, natch, though paired-up couples can play too. "The play style is similar to gin rummy, but where rummy involves playing cards with traditional suits, Matchr has you pairing up singles based on hashtags such as #homebody, #barfly, #typical, etc." Like Game of Phones or F**ktionary, there are tons of devilish contemporary games to play these days instead of, say, Apples to Apples, which incorporate off-color humor and postmodern premises.

To make a match, you pair two singles. "If two cards have compatible sexual orientations and at least a two out of three hashtag overlap, you can create a match." Though this is a card game, you also might get the weird feeling that you're playing matchmaker to a bunch of lonely singles. To win, you make four matches; but, like Uno, "if another player goes out before you, unmatched singles count for negative points."

"Matchr is comprised of actual singles I met on various dating platforms," says Incrucio. Don't worry, though — your pics aren't immortalized in a card game, unless you signed a waiver. "All of them know they're in the game and are totally psyched," he adds. He also recruited a few bonus characters, such as "a few prominent internet personalities, like Molly Soda, the Tumblr queen," he says. To keep things interesting, there are also a handful of wildcards, so the game isn't just a strange, zeitgeist-y version of Old Maid.

Matchr Is Cheeky, But It's Not Supposed To Be Mean

"The challenge with the game was to express a theme of absurdity without coming across too mean," says Incrucio. "I wanted to make fun of stereotypes, instead of singling out individuals." We've all seen the guys posing with tigers, the girls in bikinis. "So each card expresses their own little doom complex and sense of futility that I hope makes them fun to pair up," Incrucio says.

How Were People Recruited?

Incrucio had to go to great lengths to get real people on board sometimes, he says. "Recruiting some of the men to submit to be in the game required me to pretend to be a girl on all the major dating platforms, which I don't recommend, but led to some interesting experiences," he says. But he didn't trick anyone into participating. "A lot of the men were tricky to get, simply because being a girl in a dating site really sucks, and I had to wade through terrible pickup lines until I found guys who actually cared about the project," he says.

But once he, um, made a match, he found that people actually wanted to be part of Matchr. In the end, "finding people willing to be in the game was easier than I thought," he says. And though he had "participants sign a boilerplate release," he didn't make a federal case out of it if someone wanted to back out. "I have no problem catering to someone who has second thoughts," he says. The whole thing has snowballed enough that he's considering one-off editions: "I've got so many people who keep asking to be made into a card that I'm thinking about offering custom decks so people can, say, pair up their friends or shuffle their ex especially hard."

Matchr isn't just about whiling away the hours, though it can do that too. "While gameplay is incredibly fun, my passion for the project is to express a critique of Millennial dating culture," Incrucio says. "It's full of shirtless bathroom selfies and duckfaces, with an overarching theme on how much of a drag love can be."

Though this game is obviously targeted especially toward millennials, "anyone who has been on the giving or receiving end of a cheesy pickup line can appreciate the game," Incrucio says. (Play with your parents! JK.) "The play style is simple enough that you could bring it to a party," he says, but it's not so straightforward as to be boring: Matchr has "an easy to learn, hard to master strategy," he says.