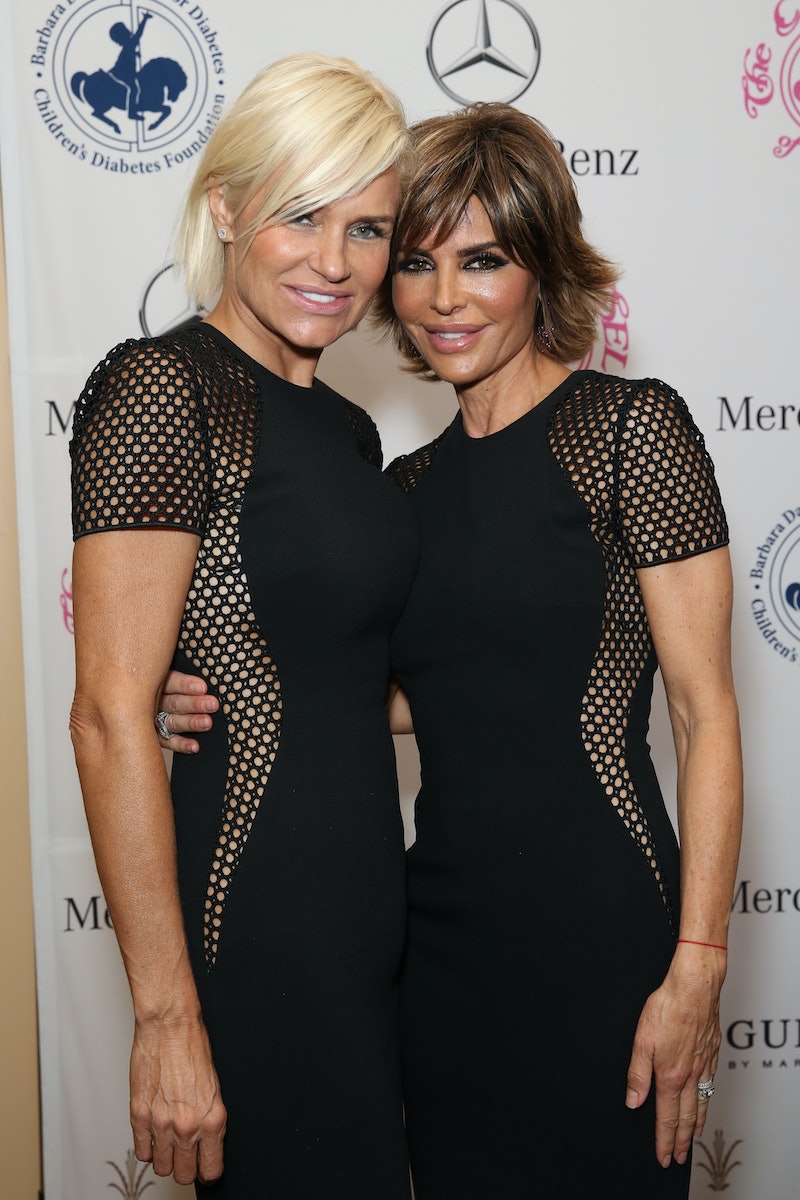 If I never hear the Real Housewives of Beverly Hills ladies gossip about Yolanda Foster's battle with Lyme disease again, it would be too soon. Who knew this season of RHOBH would turn into so much back-and-forth talk about Foster, her illness, confusion regarding it, and whether or not her children, Anwar and Bella Hadid, actually have Lyme disease. Tuesday's RHOBH episode brought all of that up once again, because of course. And now Lisa Rinna and Foster are having a Twitter feud about it all. For. Real.

Before I get into their heated discussion, let me summarize why they're arguing. As I previously mentioned, there has been much talk about Foster's Lyme disease and her treatments. So much so that Rinna discussed with Lisa Vanderpump and Kyle Richards how some people are accusing Foster of having Munchausen syndrome (in which someone makes up an illness to garner sympathy). To be clear, Rinna never accused Foster of this herself, but she felt so guilty for even discussing it that she apologized to Foster directly about it.

Vanderpump then asked Rinna directly if she was the one who told Foster what she and Richards said at the barbecue. Rinna denied it (because she didn't). Of course, all of this angered Rinna, because Erika Janye was the one who informed Foster about what Vanderpump and Richards said about Anwar and Bella. Basically, Foster went into her meeting with Vanderpump and Richards knowing what they said, but never mentioned it during their meetup. Still with me? I know, it's a very confusing and ridiculous situation.

Anyway, Rinna approached Jayne about whether she was the one who told Foster what was said about her kids. However, rather than telling the truth, Jayne lied about it, because she just didn't want to discuss it at that moment. Basically, all of this could have been avoided if the ladies just stopped talking about Foster's illness and her kids and were openly honest about everything.

Well, Rinna and Foster are clearly still heated about it, because they took to Twitter to give their opinions. Check it out:

Whew! What. A. Whirlwind. I understand both sides. I mean, I wouldn't want people questioning my children either, especially when they are dealing with an illness. As for Rinna, well, it's unfair that she is getting blamed for something that she didn't even say.

Let's just hope these ladies finally figure out when they should just keep their mouths shut, because gossiping about someone will always get back to that person.