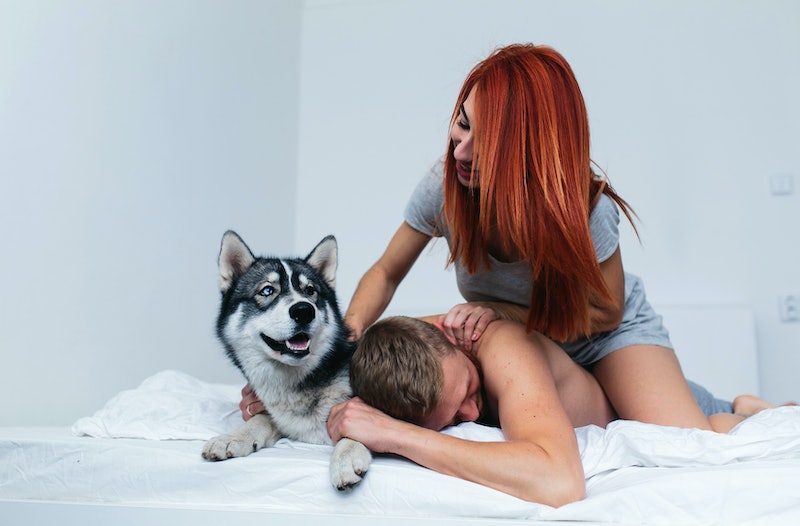 It's no secret that furry creatures are founts of love in and of themselves. But one recent study found that pets also raise your chances at finding love. The study, which looked at the owners of dogs, cats, fish, birds, hamsters, guinea pigs, turtles, rabbits, lizards, snakes, ferrets, and one chinchilla in New York, found that pets are conversation starters, and they make people more desirable.

This should come as a surprise to exactly no one, since even the most relationshipped of us all tend to coo over cute dogs on the street. Animals attract attention, and they automatically give you something to talk about. Plus, there are assumptions that people make about pet owners: Oh, you have a cat? You must be good at taking care of things, nurturing, able to think about something other than yourself, etc.

The study, conducted by independent research company Penn Schoen Berland on behalf of Purina, asked 1,200 people, including 882 pet owners, in New York and California almost 50 questions about their habits, opinions and preferences in relation to pets and dating, and the answers are striking.

1. Almost Half Of All People Would Rather Cuddle With A Pet

Of the thousand-plus who took the survey, 63 percent said they would be very likely to date someone who has a pet. So if you're feeling undateable, there is a solution for that.

When asked if they have ever, or would consider, bringing up pets to break the ice with a sexy stranger (OK, their wording was "someone you're interested in"), 54 percent said, "Hell, yes." Well, I think they just said, "Yes." But whatever.

The pet most likely to be useful in the task of meeting new people? Our beloved, four-legged, fluffy, cutest-ever canine companions, said 88 percent. Of course. Only five percent said cats, and for some reason, one percent said birds, and another one percent went with … ferrets.

It can't hurt. If you're spotted with a pet on a dating site or app, 33 percent said that it would make them more likely to want to chat you up and meet you. Then again, 62 percent said it wouldn't impact their opinion one way or another, but a measly five percent said it's a turn-off, so — might as well pose with Fido, or track down someone else's Fido to take a selfie with. A woofie?

6. Spot Really Is The Way To Go

If you are going to post a photo with a pet, dogs are best, with 54 percent saying that they'd be most into a person posing with a dog on a dating app. Cats are OK-ish, with 17 percent of the vote, followed by one percent each for birds, fish, snakes, chinchillas and rabbits. "Hey, sweet chinchilla." You've got your opening line!

As hot as a dog makes a guy with a man bun and some scruff or a gal with long blonde hair and a sweet smile may be, the opposite is true of snakes — 58 percent said snake owners are less attractive than the average Jane.

Here we have it, in black and white, folks: Dog owners are more dateable, said 49 percent, followed closely by cat owners, at 34 percent. You might want to downplay those snakes and lizards, though — 52 percent said a snake as a pet make it less likely that they would find a person attractive, and 40 percent said the same of lizards.

10. Pets Make You Not Just Dateable, But Also Sexy

Of those surveyed, 30 percent said pet owning is a "total turn on." Though 65 percent remain neutral, not really caring if their sig O has a pet or not, I think they're just trying to be diplomatic.

12. Keep This In Mind At The Pound

Though everyone knows that breed preferences go out the window when you go to the dog shelter and fall in love with a shaggy minx with soulful eyes, golden retrievers and German shepherds are the most desirable breeds for a potential mate to own, at 16 and 10 percent, respectively. Other attractive options: beagles, Yorkshire terriers, poodles and Shih Tzus, each ringing in at four percent.

13. And Now For Some Total Hypotheticals

"If you were single, how likely would you be to go on a Valentine's Day date with someone with each of the following dog or cat breeds," asked the survey, with a bunch of possibilities. Once again, golden retrievers and German shepherds dominated the bunch, with, respectively, 50 and 44 percent of respondents saying such breeds would make them more likely to go on such a dreamed-up date. Tabby and Persian cats got some love too, with 36 percent saying yes to them; Corgis, Dobermans and Siamese cats were popular options as well, at 35 percent, 29 percent and 34 percent. No black Labs??!

14. Pets Rule On So Many Levels

Though the majority seemed pretty keen on pets, they don't seem to rouse much jealousy, so that's good. A whopping 84 percent said that they have never felt jealous of a partner's pet.

The majority — 69 percent — said they'd be fine with sleeping in the same bed as a mate and a furry creature.

16. People Are Divided About Co-Owning Pets

A true tie on this one: Exactly half of respondents said that they would feel closer to a partner if they co-owned a pet. One thing everyone can agree on, though: it would be more difficult to break up with someone if you owned a pet together, said 63 percent.

17. Pets Are The Way To Someone's Heart

Better cuddle up with your new partner's dog or cat: 56 percent said they couldn't date someone new if that person couldn't get along with their pet. And people see pets as a symbol of something greater, it seems. Pet owners are more family-oriented than those without pets, said 53 percent, and if a partner was bad at taking care of pets, 52 percent wouldn't want to have kids with them.

18. Partners Trump Pets In New York — But Not By Much

A lot of people would rather spend the day in Central Park with their pet. Of the New Yorkers surveyed, 39 percent would prefer to spend such a day with a significant other — but 23 percent would choose a pet. This was followed by family members (17 percent), friends (14 percent) — or, as some serious loners responded, "no one" (6 percent).

19. Pets Aren't As Prioritized In Cali

Conversely, Californians were asked a similar question — only instead of Central Park, they were asked about a beach day. Here, though, 46 percent opted for a day at the beach with their partner, followed by 18 percent choosing to bring a family member and only 15 percent going with a pet. Similar to New York, friends were ranked at 13 percent here, and eight percent said they'd rather just go it alone.