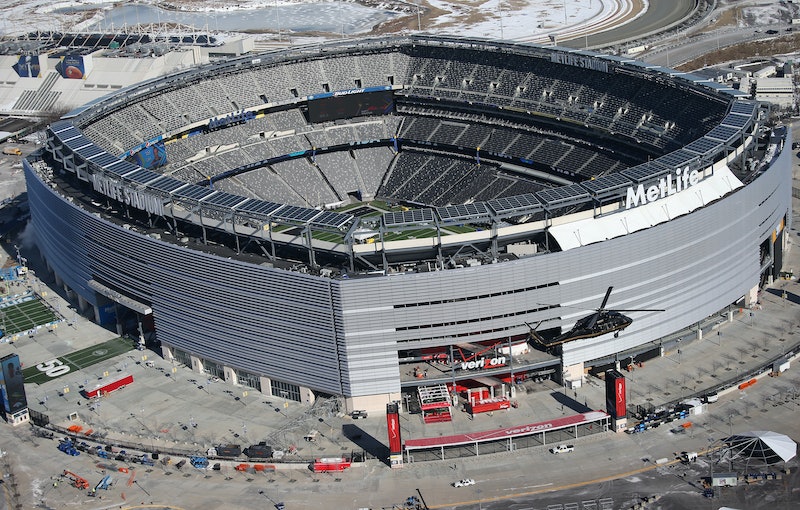 Forget the Denver Broncos and Seattle Seahawks: a new fight is taking place over the safety of marijuana use in the United States, and Sunday's Super Bowl is the battleground. The Marijuana Policy Project (MPP) released five pro-marijuana billboards this week that support the drug's legalization, claiming it is safer than both drinking alcohol and playing football. In response to this ad, Smart Approaches to Marijuana (Project SAM) released their own ad, which suggests that using marijuana saps drive, energy, and determination — all crucial factors in winning the Super Bowl and being an all-around functioning human being. But not to be outdone, the MPP has whipped up a brand new billboard in their defense.

The Project SAM billboard mimics the simple design of the original MPP ads: the words "Motivation, Perseverance, Determination" loom over a football player in mid-jump, while "None of the Above" is placed over a marijuana leaf. The new MPP billboard is similar: a shot of tequila is pictured underneath the words, "Overdose Deaths, Violent Crimes, Serious Injuries," and a picture of a marijuana leaf has "None of the Above" written over it. Like the MPP billboards, the Project SAM ads will be placed near MetLife stadium, where the Broncos and the Seahawks — teams from the only two states in the nation to legalize marijuana use — will go head to head in what some are dubbing the 'Weed Bowl.'

Project SAM, which is chaired by former congressman Patrick Kennedy, doesn't demonize marijuana or call for its legalization. According to the group, they want to provide an alternative discussion and prevent the creation of "Big Marijuana," which they call a "21st-century tobacco industry."

A group of lawmakers, scientists, and concerned citizens, Project SAM takes issue with the message that MPP is promoting: that marijuana is safe. As families gather around for the Super Bowl, getting the message out through the over-sized medium of billboards is ideal, Kevin Sabet, director and co-founder of Safe Approaches to Marijuana, tells Bustle.

Here is the SAM billboard:

The MPP's new billboards, released in response to Project SAM's efforts, mark the first time in 20 years that the pro-marijuana lobby has had to defend themselves, Sabet claims.

"I can't tell you how excited we are about [the MPP billboards], actually," Sabet says, adding that Project SAM will not be releasing another billboard in response to this one. Not only do the group not have the time as they're too busy answering the phones after their first one, but they are run by volunteers and don't have the "millions of dollars" MPP has.

"It's a different ballgame," Sabet says.

One of the new billboards by MPP shows a quote from Patrick Kennedy saying that he agrees with President Barack Obama's quote in an interview with the New Yorker that marijuana is safer than alcohol. But Sabet says that safety all depends on how you look at either substance.

On the decision to release new billboards, Mason Tvert, director of communications for MPP, said in a statement provided that the groups working to make marijuana legal have "run out of compelling arguments."

“They are now just acknowledging that marijuana is less harmful than alcohol and telling people they will be losers if they make the safer choice," Tvert says.

“If Mr. Kennedy is concerned about public health and safety, and he knows that marijuana is less harmful than alcohol, why does he prefer adults drink?” Tvert says. “Our society recognizes that adults should have the right to consume alcohol responsibly. Prohibiting those same adults from using a less harmful substance is not a very smart approach to marijuana.”