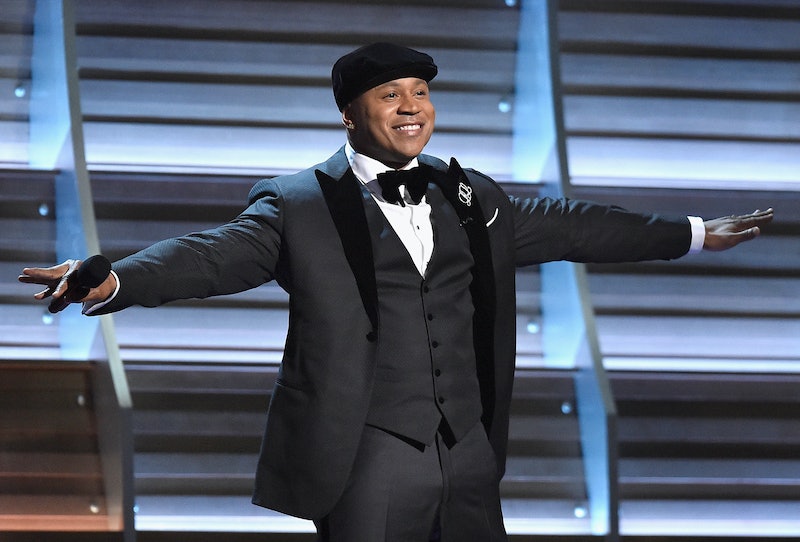 The Grammy Awards are one of the most star-studded nights, and, because they're on live TV, it's almost inevitable that not everyone in attendance will get out of the night unscathed. From bizarre red carpet entrances to epic performance blunders to uncomfortable audience dancing, the 2016 Grammys awkward moments were guaranteed to pile up, and the awards show didn't disappoint. While I don't wish awkwardness upon anyone, there is something humanizing about seeing the biggest stars in the music industry stumble a bit on live TV (Celebrities! They're just like us!), and the Feb. 15 show proved that musicians are mere mortals.

I typically find that the Grammys red carpet coverage usually dominates in embarrassing moments compared to the actual show. And, while that remained true at the 2016 Grammys, there is something in particular that I love about the cameras panning to the audience during the Grammy performances. Taylor Swift is always there to encourage people to get down during her colleagues' performances, — for which I thank her! — but even T. Swift with her grooving can't save all of the other celebs who are little less self-aware from awkwardness. With performances and appearances by Justin Bieber, Johnny Depp, Robin Thicke, and Swift herself, check out the most awkward moments of Grammys night 2016.

Although I don't want to start any trouble, Adele looked visibly annoyed during Taylor Swift's opening number when she got showered by glitter. According to Twitter, I wasn't the only one to notice either. But Adele seemed to be enjoying herself before that moment, so I'm sure everything between these queens of music is fine.

This isn't super surprising, but five-time host LL Cool J wore a monogrammed, bedazzled LL pin for the Grammys. Although it might not be weird for the audience, anyone at home who noticed definitely felt a bit uncomfortable.

Although Ariana Grande has proven that she kills it when she does impressions of other singers, her introduction to The Weeknd fell flat when she sang in the style of Abel Tesfaye's song "Earned It." Equally uncool was someone in the audience booing Grande.

In a move of blatant self-promotion, CBS had Criminal Minds: Beyond Borders star Gary Sinise help introduce Best Country Album alongside singer Cam. I respect Sinise as an actor and love his role of Lieutenant Dan from Forrest Gump unconditionally, but his appearance at the Grammys just felt shameless on CBS' part. (Although fun fact: Sinise has a band called the Lt. Dan Band!)

The Close-Up Of Lionel Richie's Face

The Lionel Richie tribute, which included performances by John Legend, Demi Lovato, and Meghan Trainor, was excellent (I love me some Lionel!), but CBS did some incredibly close close-ups of the honoree that got uncomfortable real fast and clearly Richie even felt a bit weird too as he sang along to his own songs.

Actually, Everyone During The Lionel Richie Tribute

Half the audience looked like they were at a wedding reception, the other half looked in pain, but no one was safe from the awkwardness by the time Richie himself hit the stage to perform "All Night Long (All Night)." Even after Lovato slayed, she was awkward dancing to Trainor's performance.

During one of the most anticipated performances of the night, the sound cut out almost immediately — making Adele fans everywhere shriek in anger. Adele kept on going like the classy and talented lady she is, but it was hard for the moment not to put a damper on her 2016 Grammy showing.

Bieber let his early Grammy win get to his head when he decided to throw his guitar halfway through his Grammy performance. Sorry, Bieber, but guitar throwing — like your facial hair — doesn't suit you.

I can guarantee not many viewers had ever heard of Jeff Bhasker before the 2016 Grammys, but his reaction when LL Cool J (he's still here!) gave him a shout-out for winning Producer of Year made him a face to remember.

Perhaps it wasn't the most awkward moment of the night (that would possibly go to Alice Cooper and Johnny Depp's tribute to Motorhead's Lemmy Kilmister), but Bruno Mars' lackluster response to the Hollywood Vampires helped to define everyone's underwhelming response to the performance.

Not to take away from the youngest Grammy nominee's talented performance, but the attention was taken away from Joey Alexander's piano playing by Common and Grammy President and CEO Neil Portnow nodding their heads along awkwardly to his playing.

Taylor Swift's Reaction To Her Album Of The Year Win

Swift definitely earned her Album of the Year win for 1989, but can we take a moment to appreciate the sheer gawkiness going down in this handshake with Jack Antonoff?

For inexplicable reasons, Pitbull closed out the 2016 Grammys (cutting off Mark Ronson and Bruno Mars' acceptance speech for Record of the Year!) and actress Sofia Vergara showed up to sex up and weird up the final moments of the night.

While the 2016 Grammys weren't as awkward as they could have potentially been because of the combination of the multitude of eclectic personalities plus live TV, the show never lets viewers down. Here's to more bizarre moments in 2017! (I'm looking at you, Kanye!)

More like this
Joe Alwyn Reacts To Taylor Swift Earning An NYU Doctorate In A Rare Interview
By Jake Viswanath and Nicole Pomarico
Cardi B Explains To David Letterman Why She Uses Her Star Power For Politics
By Jake Viswanath
Kourtney & Travis Crashed His Daughter’s TikTok Live In Their 2nd Wedding Outfits
By Grace Wehniainen
Twitter Is Upset About The 'American Idol' Top 3 Results: "Who TF Is Voting?"
By Jake Viswanath
Get Even More From Bustle — Sign Up For The Newsletter