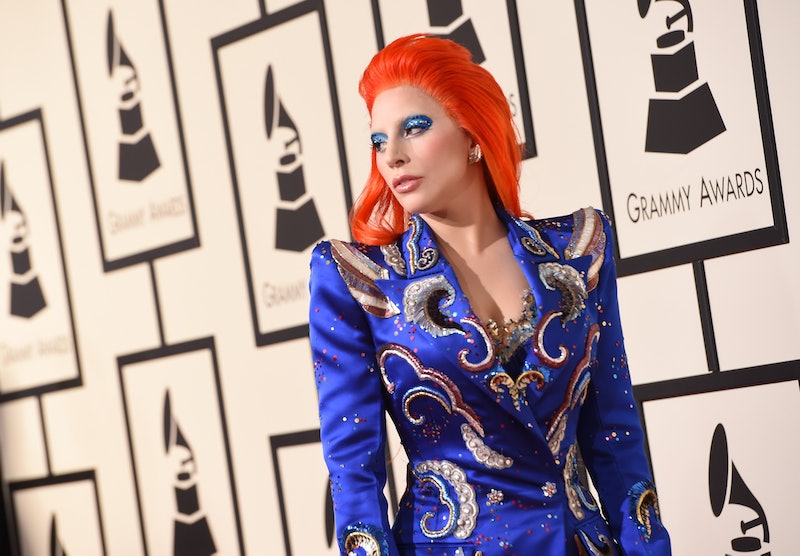 Lady Gaga is known for making a statement on the Grammys red carpet. (Who can ever forget the time she showed up in a marble egg back in 2010?) Well, Lady Gaga on the 2016 Grammys red carpet did not disappoint, paying homage to the late, great David Bowie as only Gaga could.

The singer is scheduled to pay tribute to David Bowie at this year's Grammys ceremony, performing songs from the recently deceased star's extensive catalog and using brand-new technology that's never been seen on TV before, according to E!. So going into the red carpet, there was an expectation that Gaga's outfit would be an equally stellar homage to the Starman, and not unreasonably so. She's been channeling Bowie with her recent outfit choices, like that custom red Gucci pantsuit and matching red glitter eyeshadow she rocked while singing the national anthem at this year's Super Bowl. She even went as far as to get a tattoo of David Bowie's face on her ribs just a few days before the Grammys, posting pictures of the process on her Snapchat.

Before she hit the red carpet, Lady Gaga posted a video of herself crying on Instagram, teasing both her bold blue eyeshadow and and the emotional nature of that evening's performance, with the caption, "The world loves you David."

By the time she arrived on the red carpet, the look was complete, and Gaga was rocking a red hairdo that was reminiscent of Ziggy Stardust and an embroidered and embellished navy coat with swirling cosmic designs. The jacket was a custom design by Marc Jacobs, and she finished the bold look off with some gravity-defying red heels.

Though Lady Gaga has been making some relatively conservative fashion choices these days, with this look, Lady Gaga proved that she is still Lady Gaga. This is a Gaga twist on an iconic Bowie look, from the cover of his Aladdin Sane album (which is the same image she had tattooed on her ribs), and it's the perfect way to way homage to one of the greatest music legends out there.

More like this
What Is Ariana Grande's Net Worth? When It Comes To Money, She Has No “Problem”
By Hugh McIntyre
The Best Memes & Tweets About Lady Gaga Reportedly Joining 'The Joker' Sequel
By Grace Wehniainen
Dua Lipa’s Best Looks From Her ‘Future Nostalgia’ Tour
By Dominique Norman
23 Times Meghan Markle Dressed Just Like Princess Diana
By Bustle UK
Get Even More From Bustle — Sign Up For The Newsletter