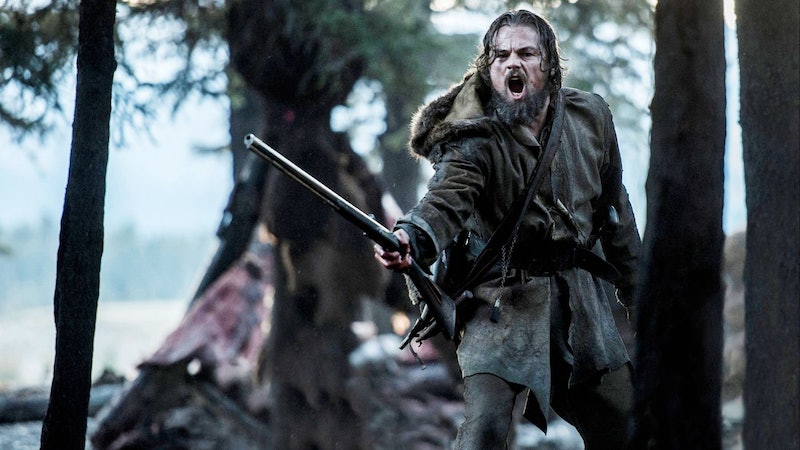 The most unsettled Oscar race in recent memory just got a whole lot clearer. Alejandro G. Iñárritu's The Revenant just won Best Film at the 2016 BAFTAs (which are basically the British version of the Oscars) cementing the Western epic as the one to beat at the Academy Awards later this month. The movie also won awards for Best Director (Iñárritu), Best Actor (Leonardo DiCaprio), Best Cinematography, and Best Sound, bringing its total trophy count to five… the most of any film at this year's ceremony. So that's it then, right? The Revenant is now a lock to win Best Picture at the Oscars? Not so fast.

It's true that The Revenant now has momentum on its side, following up its victory at the Directors Guild Awards last weekend — in which Iñárritu became the first director EVER to win two years in a row following his victory for Birdman last year — with this prestigious prize. But it's far from the only film that's been racking up precursor awards. The other two frontrunners are financial crisis comedy The Big Short and Catholic sex scandal Spotlight, both of which lost this Sunday, but still have plenty of steam behind them.

Typically, the three major guilds — the Producers Guild, the Directors Guild, and the Screen Actors Guild — all award the same film every year, like when Birdman swept last year or Argo two years before that. Occasionally, one guild will go its own way; typically SAG, which loves to award films with large ensembles like American Hustle (which won over eventual Best Picture winner 12 Years A Slave) or The Help (over The Artist) or Inglourious Basterds (over The Hurt Locker). Very rarely, all three guilds will split, awarding three different films… as they did this year, with The Big Short winning PGA, The Revenant winning DGA, and Spotlight winning SAG.

But The Revenant's additional triumph at the BAFTAs tips that split in its favor, right? Maybe. But maybe not. Of the three major guilds, the PGA is the most reliable: that organization is the only voting body in the whole awards season that votes for its Best Picture prize on the same quirky preferential ballot system that the Oscars do, a change that both the PGA and the Academy switched to in 2009. Ever since that year, the PGA has correctly predicted the eventual Best Picture winner 100% of the time. The Revenant's loss to The Big Short there was a big blow to its Oscar chances

Also, The Revenant was snubbed in two key categories: a Best Screenplay nomination at the Oscars and a Best Cast nomination at SAG. No film has won Best Picture without the latter since the award's inaugural year in 1995, the year Braveheart triumphed at the Oscars. And no film has won Best Picture without its screenplay being nominated since 1997's Titanic… and you have to go all the way back to The Sound Of Music (1965) and Hamlet (1948) to find the next two examples of such a rare phenomenon.

Then there's the simple fact that no director has ever, in all of Oscar history, directed two Best Picture winners in a row. Two men have back-to-back directing trophies: John Ford (for 1940's The Grapes Of Wrath and 1941's How Green Was My Valley) and Joseph L. Mankiewicz (for 1949's A Letter To Three Wives and 1950's All About Eve). But in both cases, one of those films lost Best Picture: Grapes fell to Rebecca and Wives lost to All The King's Men. If The Revenant wins Best Picture the year after Birdman, it will be the first time EVER the same man has shepherded two consecutive films to Oscar glory.

That's a lot of history stacked against The Revenant. So how accurate are the BAFTAs in predicting the Oscars? Until recently, they were fairly reliable, having correctly presaged the eventual Best Picture winner six years in a row. However, last year they broke that streak when they gave the top two prizes to Boyhood and its director Richard Linklater over Birdman and Iñárritu. Not only does that bring the reliability of the ceremony into question, but it also opens the door to the suggestion that the BAFTAs awarded The Revenant and Iñárritu this year as a make-up for snubbing the Best Picture winner last year.

But it's hard to deny the strength of a film that has won the Golden Globe, the Directors Guild, and the BAFTA. Sure, some typically reliable statistics are pointing away from a Revenant victory… but every pattern is made to be broken, and it certainly seems like the film is well on its way to shattering a few records and nullifying some long-standing statistics when the Academy Awards are announced on Feb. 28.

In terms of total wins at this Sunday's BAFTA Awards, Mad Max: Fury Road came in second to The Revenant with four trophies, although all of its victories were in technical categories — Costume Design, Editing, Makeup & Hair, and Production Design. No other film won more than one award. The two most-nominated films of the year, Bridge Of Spies and Carol, which both entered the ceremony with nine nods apiece, walked away with only one trophy between them, for Bridge 's Supporting Actor Mark Rylance. (Oscar frontrunner Sylvester Stallone was not nominated by BAFTA.)

Find out if The Revenant will make Oscar history when Chris Rock hosts the 88th annual Academy Awards on Sunday, Feb. 28.