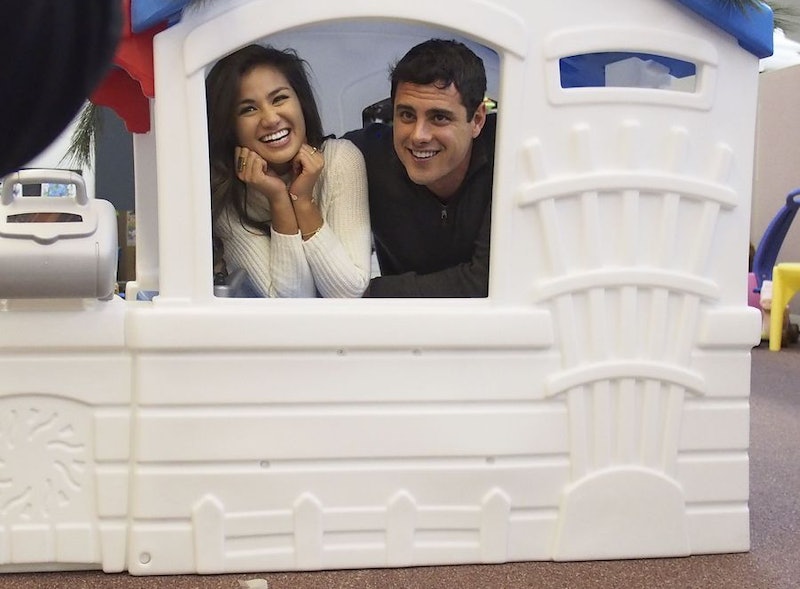 This season of The Bachelor has provided fans with a slew of ladies to root for. There are at least a handful of women competing for Ben's heart that I feel like I could totally be best friends with. No one fits into this mold better than Caila Quinn. You guys, I immediately fell in love with Bachelor contestant Caila when she first stepped out of the limo. She just seems to be so sweet and genuine. She and Ben have a ton in common and one of their shared traits is that they both have a single tattoo. We know that Ben's ink is a biblical quote on his rib cage, as first reported by OKHereIsTheSituation. So, I had to wonder, what is Caila's tattoo?

Well, according to her Bachelor profile, the tattoo is her only one and it's a depiction of the Hawaiian Islands. The tattoo sits right on her right hip and can be seen in a couple scenes from the show when she is rocking a swimsuit. I haven't heard her give an explanation for why she chose this specific piece but I am very curious for a backstory because she currently resides in Boston and originally hails from Hudson, Ohio. Neither of these places even slightly resembles a tropical paradise.

Anyway, after some intense digging, I finally found a photo of said tattoo.

How adorable is that? That is one of daintiest tattoos I have ever seen. It's so minimal and sophisticated. Some of the best ink are pieces that need explanation because their meaning isn't so in the nose. Maybe her tattoo has a crazy story behind it. Let's speculate.

Geography Can Be Hard

Maybe she always had trouble remembering what Hawaii looks like. Geography is certainly not everyone's forte and Hawaii is one of those weird island curveballs like Alaska that ends up in a box on a map of the United States. It could easily be forgotten. A reminder on one's hip could be useful.

According To Reality TV World, Caila loves the Hawaiian snack, Spam Musubi. I looked up the recipe and it sounds pretty awful. It's basically sushi with a slab of grilled spam wrapped on it. Whatever floats your taste bud boat, Caila. I know I love double stuffed Oreos enough to consider memorializing them in ink, so maybe she has subtly given her favorite snack food's birthplace a similar honor.

I mean, I know I've always wanted to go to Hawaii. Maybe while she bides her time for a trip she got the tattoo as a permanent reminder of her someday adventures there.

Basically, Caila's tattoo is as interesting and adorable as she is. Hopefully she will tell the story behind it at some point because I am dying to know.