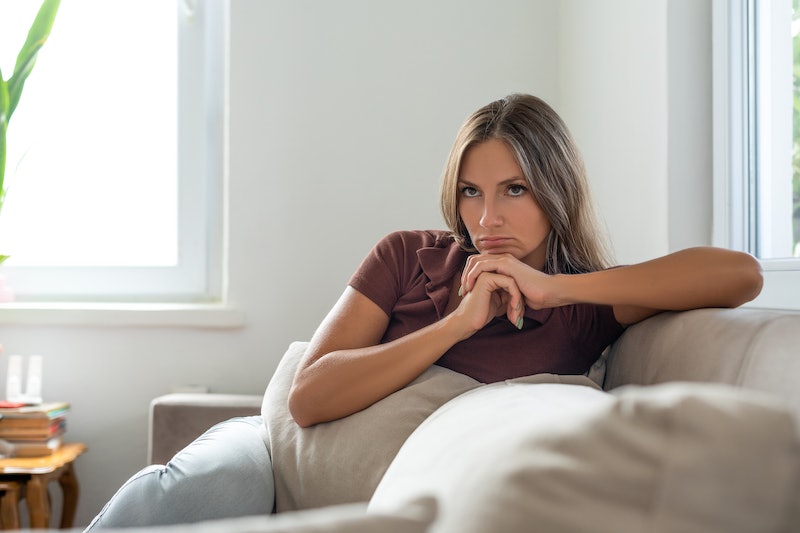 As anyone whose biological clock is permanently set to "snooze" can tell you, there's a whole lot more to being a woman who doesn't want to have kids besides just, you know, not having kids. You also have a second job that consists of trying to explain your choice to people who just can't quite understand — deflecting the comments of those friends who are constantly telling you to freeze your eggs "just in case;" ignoring the raised eyebrows of the coworkers who are confident that you'll change your mind about childbearing once you hit a certain life milestone (turn 30, fall in love, become terrified by the reality of your own fragile mortality, etc); extricating yourself from the occasional uncomfortable interaction with an elderly woman on public transit who tells you, "You know, you can't wait forever, dear." But for many of us, the most awkward element is dealing with our parents' reaction.

I come from a pretty unconventional family that is basically just me and my dad, a globe-trotting Ron Swanson type whose greatest values are freedom, independence, and access to a nice dry-aged steak. In the past, my father had urged me to resist getting married before 30, supported me emotionally as I switched careers to pursue my dream of writing, and generally enabled a ton of behavior that has allowed me to live as the world's oldest 19-year-old, so I figured I wouldn't run into any resistance from my dad on the kids issue — according to family lore, my existence was not exactly something he had a hand in planning, so I figured he might be extra sympathetic to my plans.

But when I told him I was skipping kids, he seemed bewildered. "Having you was the most important thing that happened in my life," he said. "I hate to see you miss out on that." In that uncomfortable moment, I realized that explaining to your parents that you don't want to become a parent yourself is probably almost always kind of rough — even when you're talking to a fairly unconventional parent like my dad.

Emotionally, they are likely feeling that you're rejecting them, their choices, and their values. That doesn't mean they're entitled to have a hissy-fit if they don't like your answers, though. It also doesn't mean you're a rude jerk who doesn't appreciate the sacrifices your parents have made for you. It just means that this is a tricky situation, and one we often need extra help navigating. Here are five common comments you may hear from your parents when you tell them that you don't want kids, and how to reply.

Though everyone from your best friend to your barista often feels like they have carte blanche to tell you that you'll regret the decision to not have kids, when your parents say it, it has more weight — possibly because you trust their judgment more, possibly because you can't stand to make them feel unhappy or disappointed.

What They Really Mean: Unless they're totally toxic people — what they're really trying to say is, "Raising you has been so meaningful to me, I hate to think of you missing out on that because of fear."

How To Respond: In this case, try not to get defensive, and instead speak directly to the subtext. Acknowledge their fear while also emphasizing that you know the right decisions for your own life — which aren't always the same as the decisions that they would make for you. Try something along the lines of:

"I know that you would have regretted not having kids, but that doesn't mean it's a great experience for everyone, and I don't believe it would work for me because of [ X, Y, and Z]. I know you worry that I'm missing out on something wonderful, and I just want you to know that it wouldn't be wonderful for me. It's a decision I've thought about long and hard, and I know it's right for me."

2. "Is This Because Of Something I Did?"

This one is extra hard, because for many of us, on some level, seeing our parents labor at the work of being parents did influence our decision. Maybe we saw how much time, energy, and money they sacrificed for us, and know the same is simply not possible for us; maybe we saw a parent's stress at curtailing their career to deal with childrearing and don't want the same for our lives.

What They Really Mean: Odds are, parents are asking this because they want to know if they did something so atrocious while you were growing up or were so horrible at parenting that it put you off family life forever.

How To Respond: If they did actually influence your decision through their poor parenting, well, that is a much longer conversation. But if they didn't, I suggest just focusing on your differences. Explain that it has less to do with your experience with them, and more to do with your understanding about what parenting requires. Point out all the choices you've already made in life that are different than theirs, and how happy those choices make you. Let them know that you're not rejecting the family, or making a statement about their abilities as parents — you're simply making a statement about your own future.

Again, you hear this from everyone and their mother, but when you hear it from your actual mother (or father), it takes on a different tone. When your parents say this, it's the same as when they call you up and quiz you on whether you've opened an IRA account or demand to know if your roommate remembers to lock the front door when they come in at night — basically, they want you to have kids because you are still their baby, and they want someone to always be looking after you.

What They Really Mean: They want as many reassurances as possible that there are other systems in place to take care of you when they're not there. Also, they might kinda sorta want a little reassurance that you're not into any crazy ideas about how you plan to care for them in their golden years, such as keeping them in some kind of deep space old age home.

What To Say: Much like with the IRA, the roommate, and any other situation where your parents want a guarantee of your safety, just play up the positive measures you're already taking, and those you plan on adding in the future. Tell them you will plan ahead and make sure that you don't end up isolated in your old age. Let them know about a study that showed that elderly people without living relatives don't suffer worse health outcomes than elderly people with kids. And, most importantly, promise that you'll keep spending time with them when they are old and that you will not send them to a home for the space elderly.

4. "Having Children Was The Most Important Experience Of My Life"

This was my dad's biggest point, and it was a bit of a shock to me — his marriage to my mother was a disaster, and the stress of it often left him short-tempered and exhausted. Frankly, I had no idea that he enjoyed parenting me, simply because there wasn't much room for him to express joy in my family growing up. But even now knowing that, it doesn't change my mind — I love and respect my dad, but that doesn't mean I experience life in the same exact way that he does.

What They Really Mean: Your parents may think that you don't understand how much they enjoyed being a parent, because they spent much of your childhood seeming stressed out or scattered, as parents often do.

How To Respond: Be honest about why you respect their decision, but why you also believe it would not be the most important decision of your life. I told my dad the truth — when I imagined my future, the greatest regret I could imagine was not fighting for a writing career as hard as I possibly could. Kids had never even come up. He was confused, but eventually, he began to trust that I knew what best for me — (either that, or he approached my gyno about pulling a Jane the Virgin on me and she said no).

5. "Why Won't You Give Me Grandchildren?"

If you have a sibling who does want kids, then this one packs less punch, but if you're the only kid, there may be pressure not only to produce an adorable heir, but to make sure your genetic line (if not actual, literal last name) lives on for another generation.

However, since this is not medieval times — or even a popular cable drama about medieval times! — your parents have to learn that continuing the family line is not a good enough reason for you to devote the next several decades of your life to raising another human being. I mean, they know this already — they're just being pains in the ass now.

What They Really Mean: Also known as "who will carry on the family name?" this one isn't about your parents being concerned about you missing out on an important experience, or being worried about what your choice says about your state of mind — this is just about your parents hearing from their friends that having grandkids is rad, and they're pissed that you're cutting off their supply. It's a pretty direct guilt trip.

What To Say: This is one of the easier ones to deflect — just tell your parents that you're not making your major life decisions around their desire to have a precious infant to put on their holiday cards. I went with humor when this one came up, and told my dad that he was welcome to keep buying me toys and taking me to Disneyland for the next 18 years if he liked, but pretty much anything will do here — just end the conversation. This was their Hail Mary pass, and it has failed. Your parents and their criticism over your life choices have been defeated. Now enjoy the next 30 seconds of pleasant dinner conversation (you know, until someone brings up the election/local parking restrictions/your irritating Aunt Dora, and everyone starts yelling again).

And most of all, remember: as important as it is to respect your parents and their experiences, it is also important to not let them guilt trip you — though it very well probably was the most important experience of their lives to be your parent, it is probably infinitely easier for your parents to put on rose-colored glasses about the whole experience now that you are in your twenties or thirties, living independently, and presumably wetting your pants or throwing a temper tantrum over a cookie all on your own.