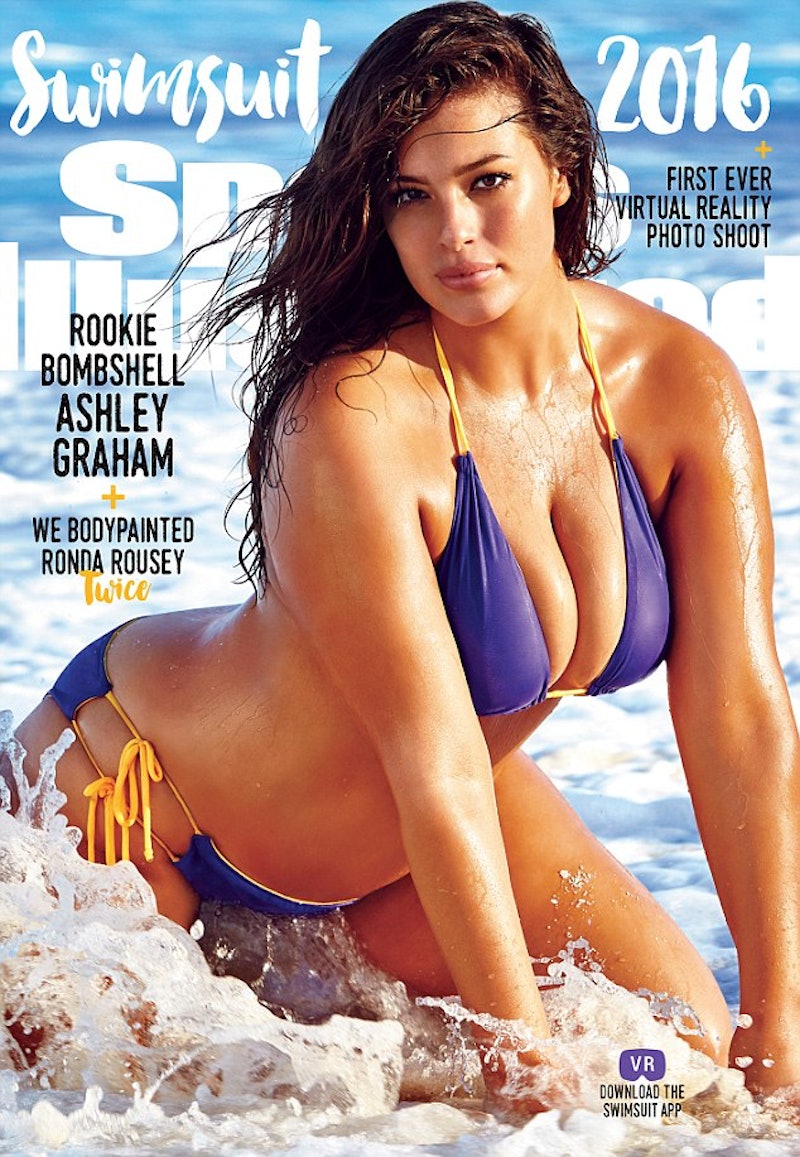 The latest rendition of the Sports Illustrated Swimsuit Issue is being heralded as the most body positive yet. First we got word of the swimsuitsforall #SwimSexy advertisement within its pages. The ad champions a diverse range of models — including plus size model Ashley Graham, British Ghanaian model Philomena Kwao, and mature model Nicola Griffin. Then, we learned that Ashley Graham was actually on the cover of Sports Illustrated , as well as in editorial photographs. But what's the difference? Is there a difference in significance or body positive value between Ashley Graham's features in editorials or advertisements?

Whether in an ad or editorial, Graham's plus size frame is still likely to be seen by anyone who picks up the publication. The key difference is just the type of page space both images are taking up. An advertisement is always paid for by its company (in this case, swimsuitsforall) for a feature in a media outlet. An editorial, on the other hand, is a feature produced by the magazine itself. So although Sports Illustrated agreed to run the swimsuitsforall #SwimSexy ad, Graham's editorial and cover spot are likely coming from its own funds, direction, and creative decisions. Regardless of our own interpretations of this publication, Sports Illustrated seems to be coming from a place of positivity, and I can appreciate that.

It could be argued that the swimsuitsforall campaign is less radical or worthy of recognition simply because it comes from a brand and not a team of journalists or Sports Illustrated photographers. But personally, I find it exciting that a magazine that's arguably been steeped in the sexualization of women is finally taking steps forward towards diversity and representation — especially since it's doing so in both its ad and editorial spaces.

Although Graham's cover of Sports Illustrated is a huge success for the plus size and body positive communities, the swimsuitsforall advertising feature should be receiving the same amount of praise — if not more. As much as Sports Illustrated has moved forward in terms of diverse representation with this newly released issue, the magazine is still far behind other companies and brands that tout their body positivity with pride. But that doesn't mean we should totally disregard Sports Illustrated's steps forward.

Everyone's personal politics move forward in different ways and at different times, and the same should be expected of companies. But swimsuitsforall's branding relies heavily on its outspoken body positivity, whereas Sports Illustrated would still have sold copies regardless of using a plus size model or not. The fact that it not only used a plus size model, but decided to work with a brand known within the body pos community, does seem to signal some progress to me.

The reality is that Sports Illustrated actually bothered to support more visible diversity than ever before. The effort and decisions to include not only a plus size body but also the athletic body of Ronda Rousey on a cover are steps toward inclusivity that we shouldn't only acknowledge, but celebrate.

Through this move, the actual impact of the body positivity movement on the world starts to become apparent. It's no longer a debate between feminist publications and bloggers, nor simply a hashtag meant to make us feel better about ourselves. Body positivity has become a tangible movement with not only real implications, but real results. Not only have inclusive brands like swimsuitsforall been able to build companies that promote self love, but publications that never have never cared about inclusivity are taking notice and making positive actions.

There is a marked difference between an editorial and an advertisement, sure. Graham being featured as a model editorially might be more exciting than her work in advertising, just because it means that she and those like her are not only being represented in order to sell things, but being represented in an artistic manner. That being said, the swimsuitsforall campaign is arguably the most body positive part of the issue, due to the brand's relationship with the community.

Regardless, other magazines will hopefully begin to understand that plus size models don't just have to be used for sales or tokenism. Perhaps they'll learn that you can sell things to women by celebrating them, rather than tearing them down. Ashley Graham's presence in both the ad and editorial will undoubtedly have a positive impact in that department.

Listen to the latest episode of Bustle's The Chat Room, where we discuss body positivity and the reaction to Ashley Graham's cover: