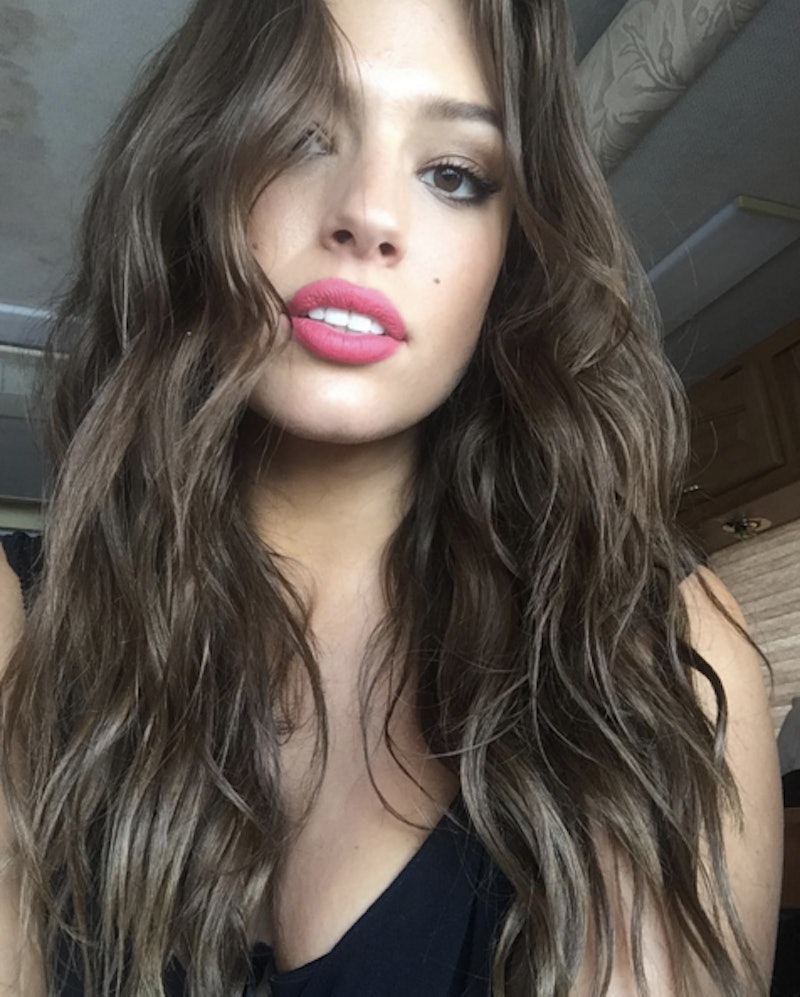 On Feb. 14, the Sports Illustrated Swimsuit Issue got something of a makeover. First published in 1964, the swim edition has long been a hub for supermodels in bikinis. From Heidi Klum to Tyra Banks to Chrissy Teigen to Naomi Campbell, modeling industry giants have either landed in its pages, or up-and-coming models have been propelled into the spotlight because of its pages. But besides being talented models, what do these women have in common? Well, they're mostly tall, mostly thin, conventionally attractive babes. They are "beauty standards" incarnate — the sort of women all other women are so often urged to aspire to.

The 2016 issue is groundbreaking for several reasons, though. It finally branched out a little from that one principal notion of beauty.

Plus size model Precious Lee starred in a Lane Bryant ad within the pages, the second WOC visibly above a size 12 to do so. Mixed martial artist Ronda Rousey landed a cover, helping give some visibility to strong, athletically built women. Curve model Robyn Lawley starred in an editorial for the second year in a row. British Ghanaian model Philomena Kwao, 56-year-old mature model Nicola Griffin, and plus model Ashley Graham all landed the swimsuitsforall #SwimSexy ad. And Graham — plus size modeling veteran that she is — got a cover spot of her own alongside Rousey and straight size model Hailey Clauson. As a fat woman who follows the modeling and fashion industries to some degree, Graham's role in SI pretty much made my day. But should it have, considering the fact that Sports Illustrated is a male-centric magazine that caters so heavily to the male gaze?

Used by feminist film theorist Laura Mulvey in her 1975 essay "Visual Pleasure And Narrative Cinema," "the male gaze" refers to the visual ritual whereby "female characters are sexualized, and the camera may zero in on female body parts considered sexual." It's essentially a form of catering to a male audience by emphasizing the qualities or aesthetic traits we assume men find pleasing.

The male gaze is arguably the thing that has driven much of marketing for decades upon decades, leading to the over-sexualization of women in order to sell everything from beer to gardening equipment to cigarettes. Is it problematic that women have often been pigeonholed into pleasing men above all else? Absolutely. But when I browsed my social media feed to check out the reactions to the latest Sports Illustrated issue, the debate revolving around the male gaze felt a little off somehow.

I don't believe that the body positive community has to be collectively happy all the time. Claiming as much feels almost like an invalidation to the myriad of voices, experiences, and opinions that the complex and diverse worlds of body positivism and size activism have to offer. So as was to be expected, Sports Illustrated, and Graham's presence on the cover in particular, sparked a debate: Was this a win for plus size visibility and the spread of body diversity in media? Or was it just a means to being able to say, "Look! Men find us attractive!"

I understand the urge to write this moment off. As something that won't incite long-lasting change or fight for an end to size discrimination; as something that's only "for men;" and even as something that just isn't relatable to the vast majority of fat women, because most women who identify as "fat" probably don't look like Ashley Graham (myself included).

Mixed opinions are normal. They're good. They're how we learn and broaden our minds to thought processes outside our own. But I think deeming this cover, and all the other moments of body diversity SI showed this year, as being completely irrelevant on the grounds that Sports Illustrated itself is irrelevant to anyone who's not a heterosexual man is something of a disservice to the models involved, to women who choose to present themselves in conventionally "sexy" ways, to people who want to feel "sexy," and maybe even to some men.

Media, fashion and modeling media included, undoubtedly need to be working actively to showcase more diversity of fat bodies above a size 22, differently-abled bodies, non-binary bodies, more WOC, and androgynous bodies. But it isn't Ashley Graham's fault the majority of mainstream plus size models look like her.

Blame brands. Blame marketers. Blame the diet industry. Blame television. Blame whoever decided that clothes don't look good on fat bodies. Graham is a longtime plus size model, working an area of this industry for far longer than most. While I yearn for the day when all of the world's most famous plus size models don't have similar proportions to her (and side note: I also yearn for the day when Sports Illustrated swim also has a male issue, or features more genders in its current one), I just don't believe ignoring how big a moment this must be for someone in her particular field is doing diversity's evolution much of a service.

Maybe it's OK to celebrate this moment as a win for Graham, for mainstream plus size models, for plus size women who do see themselves in her (because there are plenty of "average"-sized women in the 12 to 16 range who probably do see themselves represented in Graham more than they have in any other SI model before her), and even for the plus fashion industry (not because SI is particularly relevant to the plus size fashion industry, but because it utilized a person who is). The point remains that she was the first ever plus size fashion model to land this highly coveted a magazine cover, and that's a huge achievement. As Marie Claire columnist and lifestyle blogger Nicolette Mason wrote on Twitter, "This girl has been working her big butt off for a DECADE [...] @theashleygraham is one of the hardest working people in the biz."

We then arrive at the dilemma of sexy. I've often fought with myself over my makeup routine, wondering why I choose to uphold beauty conventions when in the form of lipsticks and mascara, but subvert them in terms of my style choices or open admission that I actually like being fat. Why do I pick and choose which versions of mainstream sexiness to uphold?

For me, part of identifying as a "feminist" has always meant supporting the choices women make for themselves, even if I wouldn't make them for myself. At the end of the day, just because I wouldn't necessarily get plastic surgery, or wear cakey foundation, or put on a pair of heels to go dancing doesn't mean someone else might not find personal fulfillment when executing those things. Much like some folks might not find personal fulfillment in being fat, wearing a lot of vintage-inspired clothes, and putting on a pair of emo-like creeper shoes á la me.

I believe there's a difference between exercising the right to display your body in a bikini for a male-centric publication and asking for male approval. In a world in which we are still fighting for a lot of the basic rights that men have simply been granted for being born the "right" gender, I understand the reluctance to do or celebrate things that might cater to the male gaze. But we cannot assume that everything remotely sexual must always be done for that male gaze. Nor can we assume that just because women are in swimsuits, their goal must be to look sexual in the first place. Maybe most people picking up the Sports Illustrated Swimsuit Issue are men. But that doesn't mean the models in the pages are working to please those men. For all we know, many of them are working to please other women, who make up 50 percent of the population and many of whom are bound to come across this issue. For all we know, none of these models are back at home, washing all the body oil off, and thinking, "I finally did it. I got my male approval."

But let's pretend Ashley Graham was in her living room right now, patting herself on the back for achieving one of the highest honors of the modeling industry. Let's say she was looking in the mirror and thinking "you sexy thing, you fucking did it." I think we can all agree that the over-sexualization of women is wrong — but it feels like a much different phenomenon when women want to present as sexy, or even sexual. Perhaps it's the same phenomenon that leads so many body pos activists to strip down to our underwear or fatkinis or even to our birthday suits. There is sexual agency in every body.

Speaking to Ade Hassan, the founder of Nubian Skin, New York Magazine's Dayna Evans wrote, "This newfound declaration of feminist pride in sexiness 'comes from a perspective of respect.' The important thing, [Hassan] said, is 'coming from a position of power as opposed to a position of vulnerability.'" This is why I don't believe it's up to any one individual to assume that a woman's choice in presentation is down to the male gaze. But even if a woman's aesthetic choices do come down to wanting to feel attractive to the opposite sex — even then — it isn't the job of one feminist to tell another woman that she's doing an aspect of her life wrong.

And so we arrive at the other 50 percent of the world's population: The male one. No matter how real and fucked up male privilege is, we just can't blanket the entire male population or assume that every male-born individual must maintain the same preferences, opinions, and voices as every other male-born individual. Because I believe that beauty is 100 percent subjective. I also believe that men have their own interpretations of it, person to person. Yet the reality is that there is still stigma surrounding men who like curvy or fat women. There's still judgment that comes from being a "chubby chaser" or not thinking the size 2 model with boobies the size of bowling balls is sexiness embodied.

In a way, Ashley Graham's cover feels less about curvy or fat women needing male approval, and more about acknowledgment that the main demographic of Sports Illustrated might not want to see just one body type represented. Maybe dudes are multi-faceted, too. Maybe they don't all dream of bonking a size 2 model. And maybe a publication such as this acknowledging as much is just the sort of thing that can help lead to crushing the belief that only thin women deserve love, respect, fairness, compassion, and equality from the opposite sex. Maybe even the awful dudes who make it a point to fat shame women on the Internet will lose fuel for the fire if the media outlets telling us "what sexy looks like" were more diverse, more inclusive, and more accepting themselves.

It's likely that some teenage boy in a high school changing room will put this picture in his locker and daydream about it. Hell, it's likely some grown men will, too. And good for them. As for Ashley Graham, she probably cares about her career a little bit more than all that, and what Sports Illustrated's latest issue means for her actual life. And maybe she carers about what her cover means to a lot of the women who support her. Some of whom might feel a little more empowered in their own sexual agency when they see these images; some of whom might finally want to try a two-piece bikini; some of whom might feel nothing, other than congratulatory sentiments for her.

Listen to the latest episode of Bustle's The Chat Room, where we discuss body positivity and the reaction to Ashley Graham's cover: