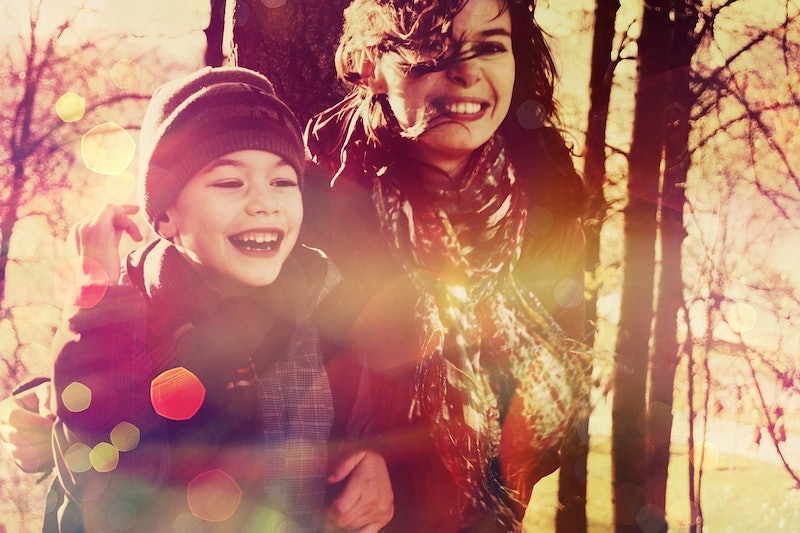 Gender norms are pervasive in pretty much all facets of contemporary life — even within our our own families. Of course, not all households perpetuate gendered tropes about families; furthermore, some households that do operate largely according to traditional gender roles find it works just fine for them, and that's perfectly OK.however, when these tropes send a message to people that they have to fit into a certain bubble or box to be acceptable or valuable as a person, they become damaging. With the rise of marriage equality, the family dynamic is changing in a positive and progressive way, but there's still a lot of work to be done, and in all kinds of families — "traditional," LGBTQ, multiracial, and more.

As with all gender norms and tropes, it's important to keep educating ourselves and expanding our minds. Much of our notions of gender come from societal and structural expectations passed down over generations, so it's normal for us to internalize many aspects of life through a gendered lens. And even after becoming aware of such norms, some people still identify with them, and that's OK! Having a choice, and knowing that multiple paths are acceptable, is the key here. At the end of the day, your family dynamic is best determined in each unique case, taking into consideration everyone's individual needs, wants, and expectations.

However, some notions of the "right" family dynamic are heavily influenced by some negative gender norms, and there are a few things that might be worth retiring (or at least, examining very, very closely). These four gendered family tropes, for example? It might be time to say goodbye to them.

This one, I think, is particularly rooted in gender norms. In a sense, society tells men that they must have certain masculine characteristics to be desirable husbands and fathers. From there, the ideal father becomes a hyper-masculine, hyper-protective version of himself as a means of being an acceptable leader for his family. This is, of course, damaging to men in a wide variety of ways; for example, it sends the message that they should not share their emotions and that femininity in men is not acceptable. And it hurts everyone else in the family, too: It may also send the message that mothers are inferior to fathers, and that men, through their masculinity, are naturally in a leadership and decision-making role in the home.

I've also noticed that in terms of the "protective dad," there's an assumption that the father is being protective of his daughter, more so than his son. This connects, I think, back to ideas about a father's need to "protect" his daughter's purity — e.g. virginity — so as not to shame the family; however, such "protection" is ultimately just a way to police women's bodies and sexuality.

Everyone knows this trope all too well: The caricature of the doting mother gone overboard. In this trope, the mother invested in her children's lives to the point where she's micromanaging every single detail of their existence. This trope is damaging in a few ways: First of all, it makes a mockery of stay-at-home parents who do actually invest time in running their household and taking care of their children. Beyond that, it sends the message that if a mother is involved in her children's lives, she knows no bounds, and has no interests, hobbies, or goals of her own. This trope also hinges on the idea that when women become invested in something (in this case, their children), they become clingy and codependent; the image of them being unable to find joy or balance in their lives goes back to the idea that women are naturally imbalanced and incomplete, when the reality couldn't be further from the truth.

This one is really common in movies and TV shows: The moody, angsty teenage daughter who rebels against her family (or school, or church, or what have you) and earns eye rolls from the rest of the cast. Unfortunately, in real life, teenage years are the prime time for experimentation and self-discovery, and the concept that teenage girls are just "naturally moody" sends the message that their emotions aren't valid. This one is gendered in that women's emotions are often disregarded because they're coming from well, women — the bias being that women's emotions are always irrational and therefore something to be disregarded.

For teenage girls who are coming to terms with becoming adults, it can be especially crippling to operate under the assumption their struggles are simply them being "moody" or irrational. In fact, this stereotype can often be used to glaze over serious mental illness like depression or anxiety — even though not taking the emotions of young women seriously might result in serious harm.

4. The "Boys Will Be Boys" Teenage Son

Just like the assumption that all teenage girls are "moody," the assumption that all teenage boys are wild and reckless is also damaging. First of all, it relies on the idea that "boys will be boys," and that even as teenagers, men will break rules, push boundaries, and potentially harm themselves (or others) in pursuit of a good time. Of course, many people do experiment during their teenage years (as well they should) — but the "boys will be boys" mentality can create too much leniency, and even foster an environment where unsafe or harmful behavior becomes expected and acceptable. In fact, this stereotype often coincides with the concept that men are forgiven for their behavior, especially if it's harmful against women, thus feeding into rape culture and violence against women.

More like this
How To Fight For Reproductive Rights, Based On How Much Time You Have
By Courtney Young
The Rarest Baby Names In The U.S., According To The Most Recent Data
By Mia Mercado and Emma Carey
Sandra Bullock, Girlboss Extraordinaire
By Matt Harkins & Viviana Olen
Are Gemini & Sagittarius Compatible In A Relationship?
By Kristine Fellizar
Get Even More From Bustle — Sign Up For The Newsletter