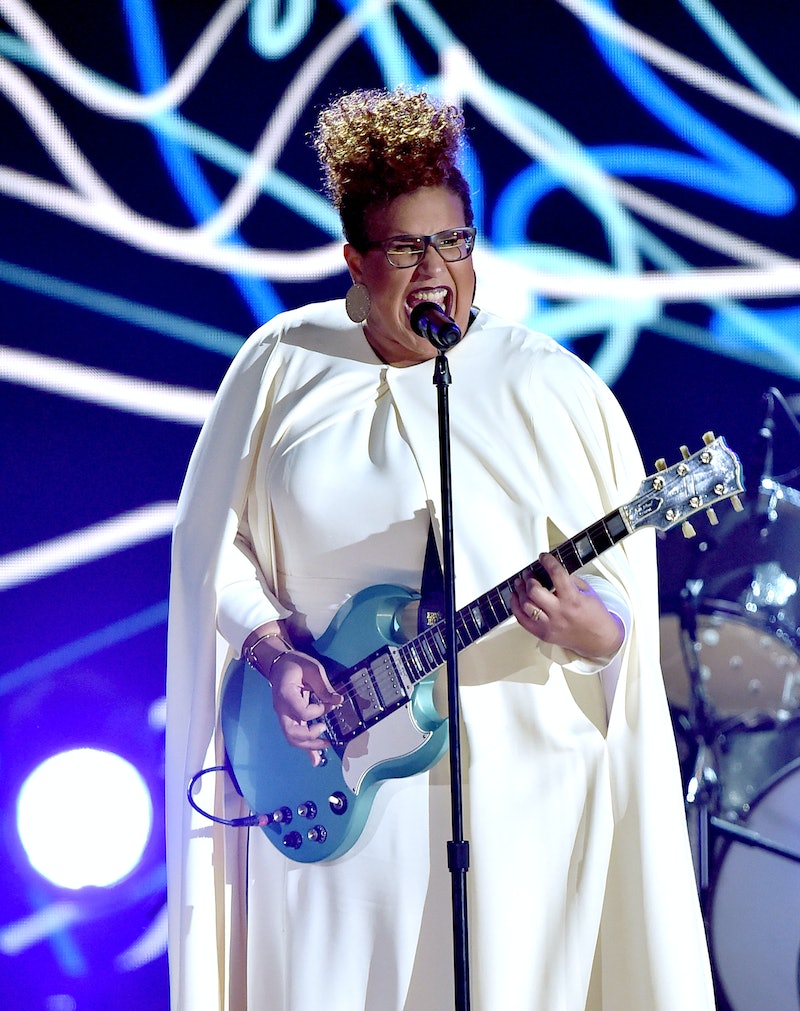 Even though body positivity became a buzzword only in 2015, body positivity at the Grammys has been observable for quite some time. Whether in the form of women exercising agency over their bodies, the celebration of plus size individuals on stage, stars combatting ageism, stars combatting pregnancy shaming, or dudes admitting to struggling with body image in front of hundreds of humans, the awards show has definitely promoted self love more than is usual on the red carpet. That's not to say it's been perfect, of course. The red carpet is the red carpet, Hollywood is Hollywood, and beauty standards are still a thing, but the diversity and body love at the Grammys is still worth a moment of appreciation.

To be honest, I could never cut it as a celebrity. The body shaming and invasion of privacy that go hand in hand with being in the public eye just aren't for me. It's not that I'd take the body shaming to heart, per se. It's more like I'm not sure I would ever have the energy to be presented with human shittiness as frequently as celebrities probably have to. But that's why I so admire when the stars take a stand, exercise individuality, and are unafraid of breaking style rules. Here were some of my favorite moments of body positivity from the Feb. 15 awards.

So, this might just seem like a dude wearing a pink suit. Maybe he just likes the color. Maybe it wasn't supposed to be a political statement at all. NBD, right? Well, in a world that still looks down upon men who express femininity (because #machismo), I'm willing to call it a moment of autonomy and individuality — two things deeply intertwined with body positivism.

2. When Lady Gaga Got Real

I often feel like expressing emotion is looked down upon, regardless of your gender. But when it comes to women, it's like we have to remain as strong, tough, and, well, "manly" as possible — particularly in remotely professional settings. Unless we want to be labeled weak, delicate, or far too feminine. But showing emotion is a natural thing for a lot of humans. Letting yourself feel is a way to connect with your body. Lady Gaga's admission of humanity was humbling.

Zendaya's look is everything to me. She's breaking gender norms by forgoing "girlish" gowns and opting for one of the best suits I've ever seen on a red carpet. Her hair blends the bowl cut and the mullet into something so spectacularly on point that I have to question everything I've ever known about hair. And I can't help but feel that her mane is important — perhaps a subtle statement towards presenter Giuliana Rancic, who discussed Zendaya's hair at the 2015 Oscars and noted that it looked to smell of patchouli or weed. That's only speculation, of course. Maybe she's channeling the late, great David Bowie. Regardless, Zendaya stayed true to her originality tonight. And for that, she's a queen.

In the so-called rules of plus size fashion, women above a size 12 are often simultaneously told to hide their curves and wobbly bits above all else while also highlighting said curves and wobbly bits in form-fitting clothes that'll give 'em some sort of hourglass shape. It's exhausting, y'all. But tonight, Brittany Howard is reminding us that plus women deserve the shapeless trend, too. We can rock the hell out of it, too. She is the queen of my plus size soul.

5. This Moment In Stevie Wonder's Speech

When multi-instrumentalist singer/songwriter and "Superstitious" mastermind Stevie Wonder took to the Grammys stage to present the award for Song Of The Year, he told the audience, "We need to make every single thing accessible for every single person," and later read the award in braille. Blind since shortly after birth, Wonder has received 25 Grammys in his lifetime and had more than 30 top hits in the United States. He was a child prodigy, and he's a musical genius. But he's also lived his 65 years with a disability, making his experiences rather unique from most of his celebrity counterparts. While making "every single thing accessible for every single person" might sound like an impossible feat, it's one we should strive for: An end to ableism, sizeism, sexism, homophobia, racism, and anything that marginalizes human beings.

Brittany Howard and Alabama Shakes are taking home three awards from the 2016 Grammys, including Best Rock Performance and Best Alternative Music Album. But Howard's actual performance? My jaw was dropped the entire time. Plus size women are supposed to remain as invisible as possible in accordance with our sizeist culture's unwritten (and sometimes written) guidelines. On that stage, Howard was anything but. She was loud. She was proud. She was a rockstar — in the most literal and metaphorical interpretations of the word.

Body positivism is only starting to infiltrate the mainstream, and I'm sure it'll be a long time coming before Stevie Wonder's hopes for humanity are actualized. But we're seeing more mantras of acceptance, diversity, and self love make it into major award shows. Perhaps it really is only a matter of time.