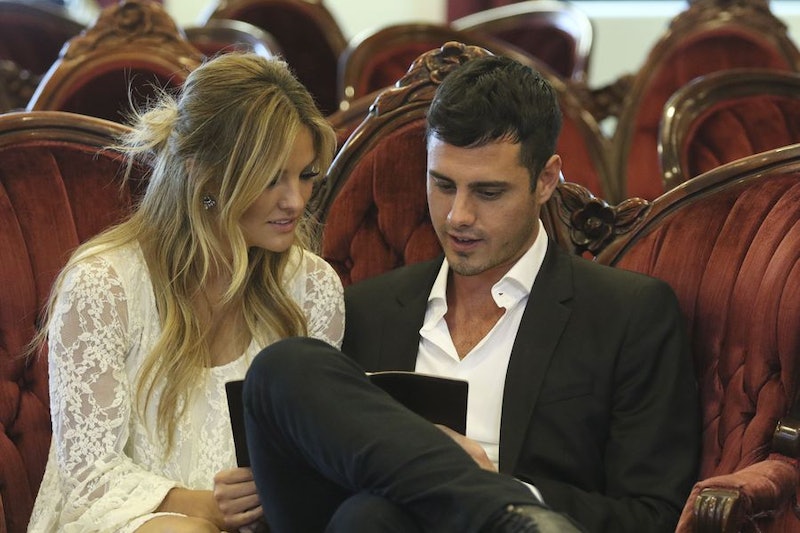 If you were watching last Monday's episode, then you saw the emotionally charged promo for the rest of The Bachelor season. That teaser was intense to say the least. Basically, we saw a lot of Ben crying, which yanked on every heart string that I possess. The young Bachelor seemed to be lamenting the fact that he mistakenly sent a girl packing that he realized he loved. Poor Ben is racked with regret and appears to attempt to get the jilted lady back. So, who is this mystery woman? Could Ben have sent Becca home too early?

I say it could be Becca because I think that she and Ben may have really hit it off, but there are also certain things that came up that may be signs that they're not meant to be. True, she's still in the running thus far, but things can change quickly on this show! First off, let's consider that the two at least knew of each other before the show started. Having some history (no matter how brief) can cause serious drama in situations like this. It may have briefly clouded his judgment and caused him to rethink her possible impending elimination, if she's who he closes the limo door on in the promo.

But, they also have so much in common, and one of those things is their faith. They both rely strongly on their respective religious affiliations and Ben seemed to really respect that Becca plans to wait until marriage to lose her virginity. It seems like their connection has a deeper layer to it that he hasn't really found in the other women. That important set of values that the two of them share could have certainly set them on the path to love. So, that would explain why he would fall for Becca, but why would he eliminate her in the first place?

Well, it could be a case of listening to the rest of the house a little too much. The ladies were not exactly thrilled to see Becca and Amber come strolling into the mansion that first night. Most of them weren't psyched to complete with contestants from previous season. I'm sure Ben has felt the tension, and a few of the ladies made "they've had their chance" comments. Sometimes house tensions can sway eliminations. Look at what happened to Olivia. She wasn't there to make friends and her clashes with the rest of the ladies probably had a hand in her elimination. It may be a long shot, but Ben may have been had a quick trigger finger and then realized he made a mistake. Just a theory, mind you.

Another thing that could be a possible reason for her departure is the very idea that makes them such a good match. Sure, they share similar convictions and devotions to their faith but Becca's promise to wait until marriage may be too much for Ben to handle. Neither way of thinking is wrong, but people hold vastly different views on the subject. Ben may support her but not feel like he could handle that type of relationship. Considering how genuine and supportive he seemed while they had the virginity discussion, though, I honesty don't think this will be the case. Again, purely a theory.

No matter what, it looks like Becca is a real contender for Ben's heart. I think that she could potentially be one of the mystery ladies that he loves. But, if he ends up sending her packing before her time, he will surely have some regrets.