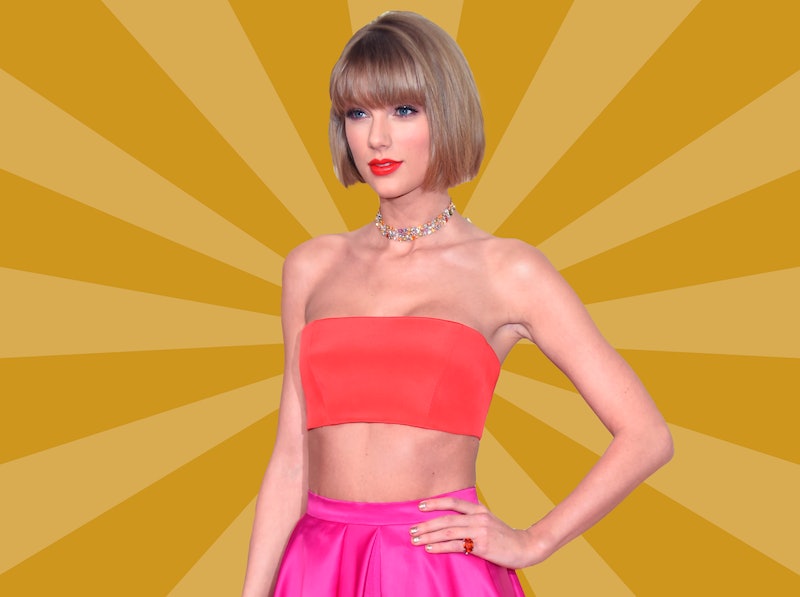 The 2016 Grammys weren't exactly filled to the brim with feminist moments. While I'm not about to discount Brittany Howard's show-stopping performance as the frontwoman of the Alabama Shakes, Bonnie Raitt taking the reins of the B.B. King tribute like a boss, or Beyoncé's general presence, the awards show was a little low on girl power. I mean, for godsakes, this is a show that ended with huge performance that was basically just Pitbull and Travis Barker jamming around Sofia Vergara performing as a sexy taxi cab. But there were some wins, like Taylor Swift being the only woman to win two Album of The Year Awards and the moment in which Swift took her glorious screen time to respond to Kanye West's recent lyric which claims that he "made that b*tch famous." However, there was one thing that threatens to take a little of the sheen of Swift's success.

Take a look at the team of men standing behind Swift as she accepts her award. I'll give you a minute, because there are a lot of them. A quick read through of Swift's team on the album is basically a laundry list of talented men: Max Martin, Shellback, Ali Payami, Ryan Tedder, Noel Zancanella, Jack Antonoff, Nathan Chapman, Mattman & Robin. (Imogen Heap is also a producer, but she was not present onstage at the Grammys to help break up the crowd.) Now, I'm not trying to discredit the talents of these guys — they wouldn't be standing there if they didn't have that special something. I'm also not saying that Swift was not the driving force of this team, because she absolutely is. And I'm not saying that her success is not her own — I'm not about to pull a Kanye on her. But it is a bit disheartening to see that when a woman finally breaks such a seemingly absurd record — becoming the first ever woman to get two Album Of The Year Grammys seems like a fake record, though it sadly isn't — she does so with a team of male producers behind her. There is not a single woman in this team of mega music makers.

This is not a new issue, but it is rather startling seeing a woman who just broke the Grammys glass ceiling and responded to a man who claims to have made her career standing in front a visual that represents the disparity behind the scenes of music's biggest successes. Back in 2014, Nashville Scene published their own findings which claimed that only five percent of music producers and engineers were women. In 2015, Billboard released its annual Power 100 — a list of the execs who rule the music business — and a mere 15 of its 100 slots were given to female music execs. And of those 14, only seven slots were given to women without male business partners. Movies and television clearly aren't the only creative industries with a deficit of female voices behind the scenes, unfortunately.

But look. I'm not trying to interrupt Swift's moment here. I want to scream out about girl power just as much as Selena Gomez — who was adorably supporting Swift by shouting "that's my best friend" after the big win.

But it's hard when we're greeted with that visual. Imagine if the moment in which Kathryn Bigelow won her Oscar, she was surrounded by all the dudes that backed The Hurt Locker. While she's giving her empowering speech, she's surrounded by dudes nodding in approval. It would kind of take a tiny bit of the sheen from the major victory, knowing that while that moment may feel like women are pulling ahead in the industry, that's not quite the full story.

At the end of the day, any victory in which a woman breaks the status quo is pretty amazing, but we would be remiss to take this moment to also understand the reality that we still have so much more work to do.