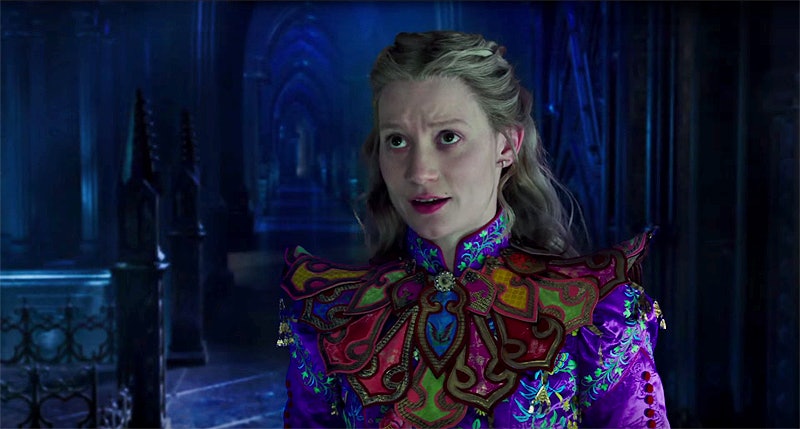 Apparently, the time for madness is nigher than we thought. Disney's full trailer for Alice Through The Looking Glass has been released, and boy does it look (in the words of Lewis Carroll) entirely bonkers. But in the best way possible of course. Complete with the iconic 1967 song "White Rabbit" humming on in the background, the trailer takes you down the rabbit hole into the wild ride of Alice's world yet again. That's right, the song in the Alice Through The Looking Glass trailer is none other than the psychedelic '60s melody, but, if you think it sounds different than you remember it, you're right. That's because Pink's behind this version.

Pink's putting her own spin on the Jefferson Airplane classic, and, as it turns out, will be lending her voice and music skills to an entirely original song for the film as well. At least according to a featurette that Disney released alongside the new trailer. In it, Pink explains that she likes "quirky and weird," and that penning an original song for the film is "one of the most exciting things she's ever done in her life." She must be a huge Lewis Carroll fan. Who knew?

Let's take a further look into "White Rabbit" though. The track was actually written by Grace Slick, who based the lyrics on both Lewis Carroll's Alice in Wonderland and Alice Through The Looking Glass texts. The song parallels Carroll's famous children stories with the hallucinatory effects of — not surprisingly, if you've payed attention to Alice in Wonderland at all — drugs. Check out some of the lyrics:

On top of the titular "White Rabbit," other characters from the Alice texts are mentioned throughout. The caterpillar, the White Knight, the Red Queen, and even the dormouse.

When logic and proportionHave fallen sloppy deadAnd the White Knight is talking backwardsAnd the Red Queen's off with her headRemember what the dormouse saidFeed your head, feed your head

Though it was popular during the time it came out, "White Rabbit" has since become an emblematic song for the drug culture of the '60s. It's line "Go ask Alice" was directly taken to inspire the cautionary addiction novel of the same name. It was mentioned in Hunter S. Thompson's drug fueled Fear And Loathing In Las Vegas, and has appeared in shows ranging from The Sopranos to The Simpsons. Watch the song in action for the Alice Through The Looking Glass trailer below, and prepare for a crazy, albeit pleasing, trip.