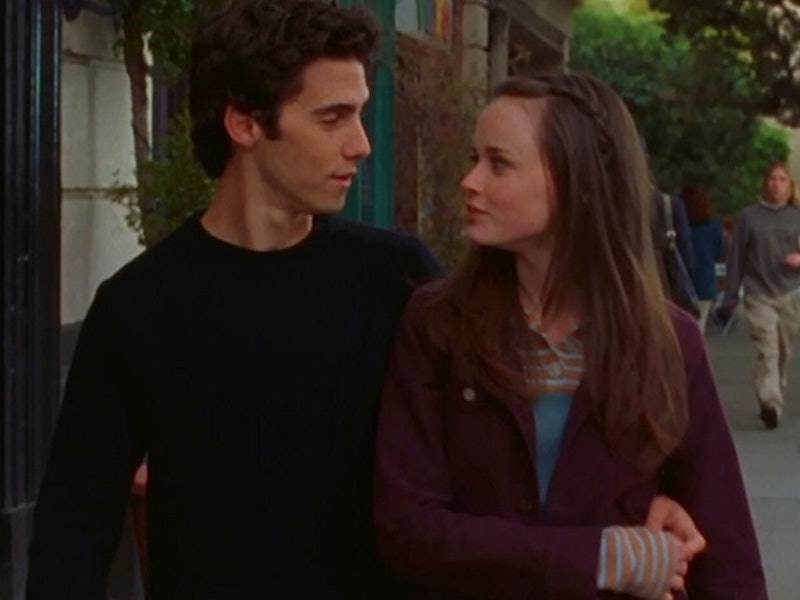 At this point there's really no denying one important fact: Gilmore Girls is coming back. However, if you're a Rory and Jess shipper like I am (...Jory? ...Ress?) then you know that that's not the most exciting part of it all. The most exciting part has to be that Milo Ventimiglia — aka Jess Mariano — is going to be returning to the show along with the rest of the already announced revival cast. And what does that mean for fans? Well, it means that there are questions that come with the hope of Rory and Jess still ending up together.

But let's not get too excited just yet. Unfortunately, Jess is not the only one of Rory's exes that is confirmed to return to the Netflix-streaming mini-series revival. Instead, all of Rory's exes are going to back in Stars Hollow, which can only mean one thing: A currently single Rory is going to have to choose the guy that's best for her, even if that guy ends up being no gy at all. Now this is where things are going to get tricky. However, figuring out if Rory will end up with Jess is just the tip of the iceberg. Jess being in Stars Hollow again doesn't just make me wonder about his place among the Gilmore's, but it makes me wonder about the state of his life at this very moment. The excitement is easily leading to an array of endless questions. And here are some of the big ones.

1. Can Rory and Jess Get Back Together?

Let's start with the obvious. Clearly, if you're shipping Rory and Jess, he's at the top of your list when it comes to picking which guy she should end up with. But instead of the mere question of will they get back together, instead the question has to be can they get back together. Because, if you remember correctly, the last time we saw Jess, things didn't exactly end on good terms. Rory kissed Jess as a way of making Logan jealous when Jess came back into town... And that was the end of it. But who knows? Maybe time really can heal all?

Jess is a total stud. He also ended up having a successful career in writing and publishing. Needless to say, he's a total catch when it comes to being an adult. So is he even still available for Rory? Unfortunately, it's totally possible that another girl could be occupying his time at the moment. So, will he marry someone else? Or will he drop everything and ask Rory to run away with him once again?

3. Why Is Jess Back In Stars Hollow This Time?

4. Is Jess Still Working In Publishing?

Things took a strange turn when Rory's life was crumbling around her, and Jess was actually the one with the solid career. However, was the path he was going down one that would stick — or was it just a temporary stepping stone? There are two ways this could go: Jess could either just be a writer at this point or he could have a fancy job as the head of a publishing company. Either way, I don't believe that his life managed to get worse since we saw him last.

5. Is Jess' Writing Career Taking Off?

If there's one major accomplishment of Jess' from the show, it had to be the fact that he actually wrote a book. Honestly, when we first met Jess I would have never guessed that to be his future. But how big of a writing career is Amy Sherman-Palladino planning for this guy? Is he going to be leading his own huge best-selling franchise? Or is he just going to be the proud author of a few casual books?

6. Are Jess And Dean Going To Still Have Some Beef?

Here is where things get complicated. As joyous as I am over the fact that Jess is returning, there's one other casting fact that can not be denied: Dean Forester is confirmed to be back in Stars Hollow as well. And, honestly, I would not be surprised if things managed to pick up right where they left off between those two. If both guys have been waiting around to catch the heart of Rory then things are most definitely going to get messy.

7. What About A Jess And Logan Conflict?

But, unfortunately, Dean is not the only ex who could get between our beloved Rory and Jess duo. With Logan in the picture as well, Rory may be faced with a second proposal. And, considering that Logan had it out for Jess from the moment he met him, things are bound to get ugly if they're brought face-to-face.

8. Does Jess Even Still Have Feelings For Rory?

This question is too heartbreaking to ask, but it's still a thought. As I mentioned earlier, Jess was a little pissed at Rory for using him to make Logan jealous. And, considering all of the time that has passed and all of the possible other girls he could have met, there's a chance that Jess could have been so annoyed that he just left the idea of Rory behind.

9. Is Rory Still Bottling Up Her Feelings For Jess?

To me, one thing seems clear. Jess has always been on Rory's mind since the day she met him. Between ruining her relationship with Dean to be with Jess and not resisting her urge to kiss Jess even when she was with Logan, this boy has got Rory all sorts of confused. So, will seeing Jess in Stars Hollow again derail everything in her life and bring out her emotions once again? Or has she really been able to push those inner feelings aside?

10. What Does Lorelai Think Of Jess Now?

Maybe with Jess being an adult instead of a teenager, us Jess and Rory fans can finally gain some support from Lorelai (and maybe even Emily!). While I feel like the odds may still be slim, we won't really know until we find out what's actually going to happen next.

11. How Is Luke's Relationship With Jess Going?

Luke and Jess' uncle-nephew relationship with one another is kind of amazing. As much as they want to hate one another, I'm pretty sure that adulthood has done their family ties justice. And we know for a fact that Luke has always been a big fan of Rory and Luke getting together. So, could Luke end up being the binding factor between our favorite couple?

12. What Kind Of Car Does Jess Have Now?

Jess' cars are important to him. And with a good career, adulthood, and his Walmart vest being long gone, I'm sure Jess invested in a nice pair of wheels. Plus, what better way to win back Rory than to take her on another drive around town in an impressive car? I certainly would take him up on that offer.

So, will Jess and Rory end up together? And when will we hear the answer to all of these questions? Well, filming for the Netflix-based Gilmore Girls revival is under way with no release date set as of yet. So, patience is key. For now.