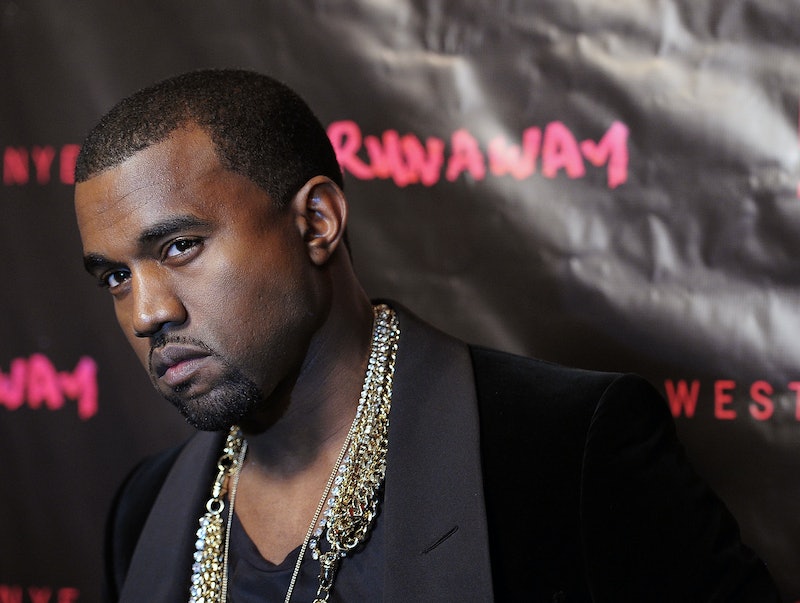 In today's episode of Outlandish Things Kanye West Says on Twitter, the message he shared on Wednesday, Feb. 17 may be the most shocking one of all. In a series of self-reflective tweets that look back on a previous comment the rapper made about "taking the rap throne," West showed a humble side of himself that is so rarely seen it's almost impossible to prove that it exists.

Blatantly admitting that his "number one enemy has always been my ego," West laid his soul bare on Twitter, backtracking on his aforementioned words about usurping that rap throne and instead praising rappers from all over and stating how everyone has something different to bring to the table. This, without a doubt, is a whole other side of Kanye West — the man who has repeatedly referred to himself as a god and proclaimed his genius more times than the media can keep up with. It's a truly welcome epiphany from the rapper, who has spent the better part of the past few weeks making headlines for his misogynistic claims that he made Taylor Swift famous (or "this b*tch," as he refers to her on the track) and asking Mark Zuckerberg to invest a cool billion into his "genius" ideas.

Instead, West showed a gesture of true humility, writing:

It's refreshing to see the 38-year-old not only admit his mistakes, but give credit where credit is due and come to the realization that he is not the be all, end all in the rap game. This may be an easy thing to see for most people, but for West, a man who is so blinded by his own inflated ego to the point where almost every entertainment news site has at least one list about his outrageously egomaniacal quotes, this is an amazing perspective to see from the rapper.

Of course, there's no doubt in my mind that West is still going to be the same self-important, "Kanye Loves Kanye," polarizing public figure that he's always been. Even in these tweets there are hints of his ego poking through, like when he references his own track "Ultra Light Beam" and the fact that he even deleted and then re-tweeted his last tweet because he initially spelled "throne" wrong. But what's important here is that we are seeing a humble, human side of West, one that checks his own ego and realizes that, at the end of the day, maybe he isn't God's gift to humanity after all. Being cognizant of his own mistakes and publicly rectifying the situation is the sign of someone who maybe realizes he needs to tone it down — at least for now.