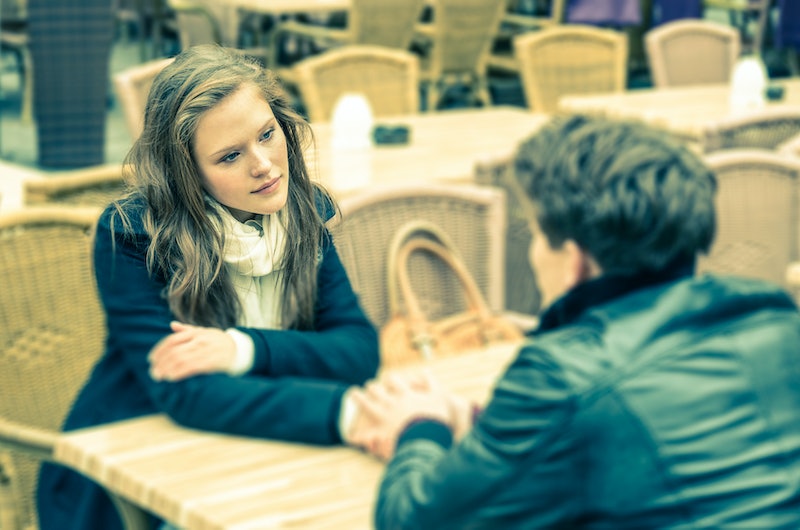 According to science, love doesn't last forever. Hollywood, romance novels, and our culture might try to make us believe otherwise, but that doesn't mean it's true. So if you’re down on yourself for falling out of love, pick your head up and smile; scientifically, it wasn’t meant to last anyway.

A 2013 study out of the University of North Carolina at Chapel Hill found evidence that love isn’t the everlasting stuff of great novels or your favorite rom-com. Instead, according to the lead researcher, Barbara Fredrickson, love is a “micro-moment of positivity resonance.” What that means is that you can experience these moments with anyone, at any time, and those fleeting connections that are filled with positive emotions are love. So while we can look at our partner and think we’re in love and in love for the long run, it could just be a series of moments and one day those moments can just stop. Then, there you are staring at your partner wondering how the hell you ever fell for them in the first place.

But whether or not you agree with Fredrickson’s findings, there’s no doubt that everyday people fall in and out of love. While both feelings are equally intense, on opposite ends of the spectrum, they can also be equally confusing on the senses. Just like falling in love, falling out of love may be different for everyone, but here are 45 little ways to give you a heads up that your feelings are changing.

1. You Feel Indifferent About Your Partner

Remember when you used to be so excited every time they called or texted? Now it’s just a feeling of whatever.

2. You’re Not Excited To Hear From Them

When a text from them shows up on your phone, you actually groan.

3. They’re No Longer The First Person You Go To When You Need Someone

You’ve started to gravitate toward your friends and family, preferring to leave your partner in the dark.

4. You Find Yourself Crushing On Other People

Although having a crush when you’re in a relationship is normal, you realize your most recent crush it a whole other level ― like you want to jump their bones kind of level.

Every time you have sex, you’re just going through the motions instead of telling your partner that you’re just not into it anymore.

6. You Start Arguments Just To Pick A Fight

You pick a fight over everything and anything, even the dumbest, most insignificant things in the world.

7. You Don’t Care About Resolving Your Issues

And after these fights, you’re content to go to bed or storm out of the house. You don’t see the point in resolving anything.

8. Their Quirks Are No Longer Cute

The way he pulled at his beard when he was thinking that you found so charming once upon a time is now just an annoyance that you wish he’d just quit.

9. You Think Of Someone Else During Sex

And even if you’re not thinking of someone else, you’re definitely not present in the moment.

10. You Wonder What You Ever Saw In Them

In fact, you wonder this pretty much every time you look at them.

11. You Spend More Time With Your Friends

Actually, you spend more time with anyone. You’d rather be with strangers at a bar than with your partner.

You don’t even remember what those assets were. I mean, were you drunk for the first several months or years of your relationship? Maybe.

13. Your Therapy Sessions Are Now A Bitch Fest About Them

You used to talk about your depression, anxiety, and how your boss won’t give you an effing break, but now it’s all about how annoying your partner is 24/7.

14. Your Friends Tell You Daily You Need To Just End It

You’re not only annoying your therapist, but your friends are getting frustrated too. So much so that they want you to end it so you can finally talk about something, anything, else.

15. When You Look To The Future, They’re Not In It

You know a life with them would just be the dumbest path you could take.

16. You Can’t Even Cry At The Thought Of Losing Them

I mean, you try to cry at the thought. You might even get out a couple tears, but then you realize that maybe you’re crying over the fact that you can’t cry.

17. Kissing Them Makes You Feel Sick

It makes you feel sick all over and like you’re somehow betraying yourself.

18. You Can’t Even Remember The Last Time You Felt Butterflies

Now this thought might make you cry a little bit, because there were once butterflies for sure, and with them gone, you're forced to realize there's nothing sadder than missing butterflies.

In other words, the sexual attraction has been completely stripped from the situation and you’re pooping with the door open, because you don’t even care anymore.

20. You Don’t Think To Include Them In Your Plans

Meh. You know they’ll just bring you down.

21. They’re No Longer Attractive To You

Sometimes you stare at them and just see ugliness staring back and you can’t shake it.

22. They Seem Like A Burden Instead Of A Gift

Not just a burden, but sort of like an abscess on your life, to be honest.

23. You Feel Relieved When They’re Not Around

When they’re not around you don’t have to pretend to give a damn.

24. You Know You’d Be Better Off Without Them

You know, because you wouldn’t have to pretend all the time, and pretending is exhausting.

25. You Dread Their Presence

Not just because of all the pretending, but because even hearing them breathe is aggravating.

26. You Desperately Try To Figure Out Where It All Went Wrong

While part of you doesn’t care, another part of you can’t help but wander (a la Carrie Bradshaw), where the love went.

You’re not sure why you pity them, but you just do. Maybe it’s because they’re too blind to see that you’re falling out of love.

28. You No Longer Take Them Seriously

At one point, you thought all their dreams were SO exciting and fascinating. But now, the fact they want to be in the Guinness Book of World Records for playing guitar for the most consecutive days in a row is just absurd.

Hey, if they end it, then you get to play the victim card. Everyone sides with the victim.

Where you once saved everything that reminded you of your partner, even silly things like receipts, now it all ends up in the trash.

31. You Know If They Cheated You Wouldn’t Care

Well, you might care a bit. But not enough to ruin your day.

At last if you cheat, you’ll give them a reason to dump you.

It’s actually only in these moments that you feel anything at all... and it's just pain.

34. You’ve Started Labeling Things That Are Yours

You want to make damn sure that they don't get your first edition of The Great Gatsby when you move out.

35. You Don’t Want To Communicate

It’s not even that you don’t want to communicate about the big stuff, but it’s the little stuff, too.

36. Your Response To Everything Is ‘Fine’

Because that’s all you’re capable of thinking, feeling, or saying. It also immediately ends the conversation.

37. You Wonder How Much Longer You Can Fake It

Another week? Another month? How about another hour?

You’re just so angry inside that it’s the only way you know how to respond.

39. You Fake Being Asleep All The Time

If you don’t fake it, you go to sleep earlier or later than them just to avoid them.

40. You Have Zero Interest In Their Life

You don’t care how their day was, so you don’t even ask.

41. You’ve Begun To Mourn The Relationship

Simply, you know it’s over, but you just don’t know what your next step is.

42. When They Smile At You It Hurts

It hurts, because you can’t remember how to smile back.

And when you do, you feel nothing.

Wouldn’t it make everything all so much better? Like, maybe they could be abducted by aliens!

45. The Hole In Your Life Is Palpable

More like this
What Is The Forest Personality Test? The TikTok Trend, Explained
By Georgina Lawton
How To Do The Intimacy-Boosting Lotus Sex Position
By Laken Howard and Lexi Inks
Are Leo & Capricorn A Good Match?
By Kristine Fellizar
Expert Tips For Being On Top When You're Plus-Size
By Lexi Inks
Get Even More From Bustle — Sign Up For The Newsletter