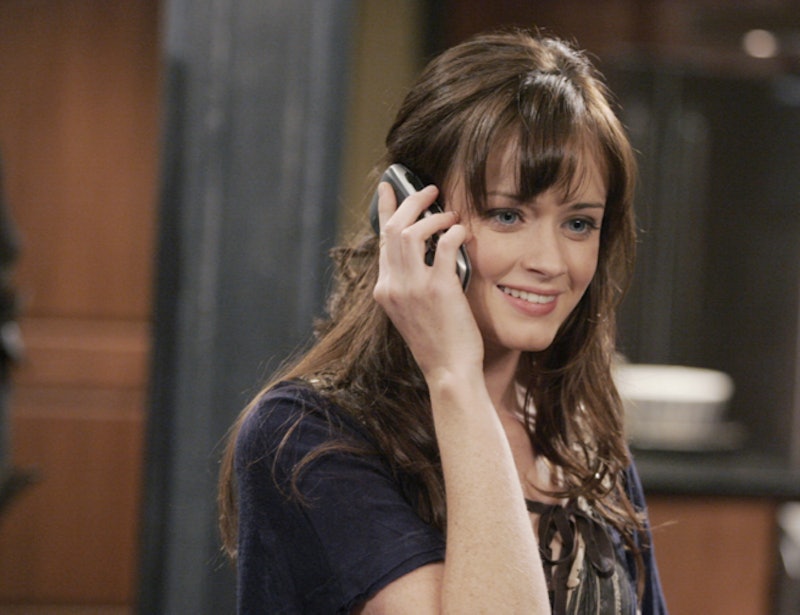 News of the Gilmore Girls revival has fans everywhere freaking out since, finally, we'll get a glimpse of what happened to Lorelai, Rory, and all their friends and family. No one was quite prepared for the departure of the series way back in 2007, especially since there were so many questions left unanswered. Did Luke and Lorelai get back together? Did Rory end up with Logan? Is Luke's Diner still open and serving coffee? These are all very important things we need to know, and now we might actually get our questioned answered. But I, for one, hope that Rory doesn't up with Jess on the Gilmore Girls revival. Not him, not Logan, and not Dean.

In the original Gilmore Girls run, there was a much-fought battle over Rory Gilmore's heart, with her three major ex-boyfriends, Logan, Jess, and Dean, all vying to be her soul mate. So when Rory turned down Logan's marriage proposal in Season 7, fans were left wondering who she might end up with. Even though all three exes are returning for the Gilmore Girls revival, I have a new theory. Rory Gilmore should end up with a new guy, because the past should stay in the past. Isn't it time we cast someone exciting and hot to be Rory Gilmore's love interest in the Gilmore Girls revival? Doesn't she deserve at least that?

I realise that my theory may not be a popular one, as most people have committed to their team, be it Team Logan, Team Jess, or even Team Dean. However, you should really hear me out, because can't we all dream a little? If we could matchmake Rory Gilmore with just about anyone, wouldn't we want to widen our catchment area? Because, as lovely and attractive as ex-boyfriends are, they're often exes for a reason. No one wants me to start picking flaws in Logan, Jess, or Dean, but I can find a million reasons Rory shouldn't be with any of them, and, if you're really honest with yourselves, you can too.

It's great that all three of Rory's ex-boyfriends are back for the Netflix revival, as exes are often the people who know us best of all. They've been present at important life junctures, and understand us in ways other people don't. But this doesn't mean we should be with them. I wouldn't be surprised if Rory ended up with Jess, as he always seemed like the one who got away, but if she ends up with Logan, I'll be genuinely upset. Dean is a non-entity to me. I just think that Rory deserves a lot better from her life as an adult than to limit her dating pool to guys from her past.

A potential wish list of suitors for Rory Gilmore, if I could cast anyone, would include the likes of Ian Hale, Ryan Guzman, Michael B. Jordan, Rider Strong, Tristan Wilds, or Ryan Gosling (I mean, maybe not?). My point is, there are a zillion age appropriate hot guys we could pair Rory Gilmore up with, so why do we insist on only choosing between her three major exes? A new guy would certainly surprise viewers of Gilmore Girls, and, above all, Rory deserves to be happy. I know she's a fictional character, but she deserves it, OK?