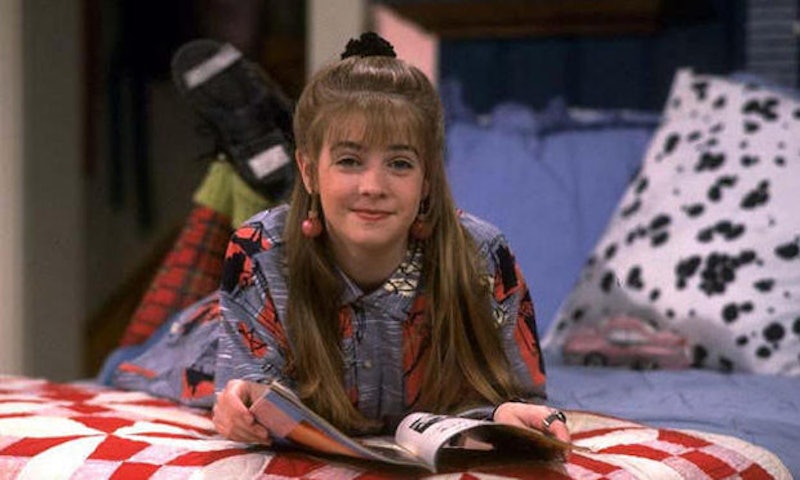 If you grew up in the '90s, there is at least an 80 percent chance that Clarissa Darling was your role model. Clarissa Explains It All is one of those seminal '90s shows that is impossible to forget if you were lucky enough to spend your Saturdays watching SNICK. The wit and wisdom of Clarissa was obviously the show's greatest strength, but what is truly remarkable about the show is just how often Clarissa Explains It All got life lessons right. The advice Clarissa dispensed was legit and it still holds up today. Her topics of the week ranged from the trouble with dating friends to sibling squabbles, and she had a way of making young viewers feel like she truly was in this whole growing up thing with them.

I'm not saying Clarissa isn't very much a product of her times. Her eccentric outfits would only ever be cool in the eyes of a '90s kid, but looking back, she truly did have it all figured out. It helps that Clarissa was an early adapter when it came to technology, and she had an innate curiosity which led her to be open to new experiences. Add those things together, and you get a teen who always knew what was up with impending adulthood.

Here are 11 things you can thank Clarissa for explaining to you.

Way before Netflix came on the scene, Clarissa decided to watch TV for 24 hours straight as a science project. As anyone who has fallen down a Netflix rabbit hole only to turn their bloodshot eyes away from the screen and discover they have lost an entire day to Love It or List It can attest, there is such a thing as too much TV. This is a thing you should already know, though, because the experiment left Clarissa feeling bonkers.

2. You Can Have Too Many Side Hustles

Millennials are all about side hustles, and in moderation they are a great way to make extra cash. However, spreading yourself too thin never ends well. In Season 3, Clarissa tried to hold down four jobs at once and ended up an exhausted, stressed out mess. She was telling future you to take note before you commit to knitting hamster hats on Etsy, dog walking, tutoring, and holding down your day job all at once.

3. Dating A Friend Doesn't Have To End Badly

Everyone wanted to see Clarissa and Sam together, but when they finally went on a date, it was clear they were better off remaining best friends. Still, Clarissa had to go through some serious angst over the situation because she was certain dating Sam only had two outcomes: a long-term relationship or a broken friendship. Ultimately, Sam and Clarissa were mature enough to realize they could just go back to being friends after their disastrous date, and the same is true in real life as long as both parties agree they work best as buddies.

4. Sometimes It Is Best Not To Give Advice

Remember Clarissa's advice column? Think of how things went for her the next time you feel the need to offer advice to a friend on a subject you know nothing about. Sometimes it is actually better to just listen.

5. There Is No Such Thing As An Uncomplicated Sibling Relationship

Your sibling can be your greatest enemy one day and your best ally the next. This is a lesson Clarissa and Ferguson spent five years trying to teach you.

6. There's No Harm In Exploring Your Personality Via Clothes

The fear of impending adulthood was a recurring theme in Clarissa Explains It All, but Clarissa revealed the worst part of adulthood perfectly when her mom got the flu leaving Clarissa and Ferguson with all the household chores. There is nothing worse than the knowledge that you will be dusting things every week for the rest of your life.

8. Computers Are The Best

Occasionally, Clarissa and technology would have a falling out, but Clarissa was one of the first TV characters to fully embrace computers — and in the process she prepared you for a tech heavy future where computers would be an everyday part of life.

Whether it is your BFF, your parents, or even your significant other, you can't expect to command their attention all the time. This seems like common sense now, but think about how many episodes of Clarissa were devoted to her learning how to accept Sam and her parents had lives outside of her. This is one of many ways Clarissa paved the path for you to be a well-rounded adult.

10. Fighting For What You Believe In Can Come With A Cost

Clarissa took on oppressive dress codes, bullies, and protesting animal testing — all worthy causes. She ended up dealing with the consequences (including an arrest) of standing up for what she believed was right every time. In the process, she showed you even the best intentions can lead to trouble, so choose your battles wisely.

11. Pizza Is The Great Equalizer

In sickness and in health, in times of joy or times of disagreement, Clarissa knew you can never go wrong with pizza.

More like this
Everything To Know About 'Scream 6'
By Jack Irvin and Jake Viswanath
Emma Thompson, Lashana Lynch, & Stephen Graham Lead Netflix’s 'Matilda'
By Sophie McEvoy
Why You Loved 'One Tree Hill' So Much — And Still Do
By Sabienna Bowman and Radhika Menon
Jennifer Aniston Is Still Wearing That 'Friends' Dress She Stole From Monica's Closet
By Jake Viswanath
Get Even More From Bustle — Sign Up For The Newsletter