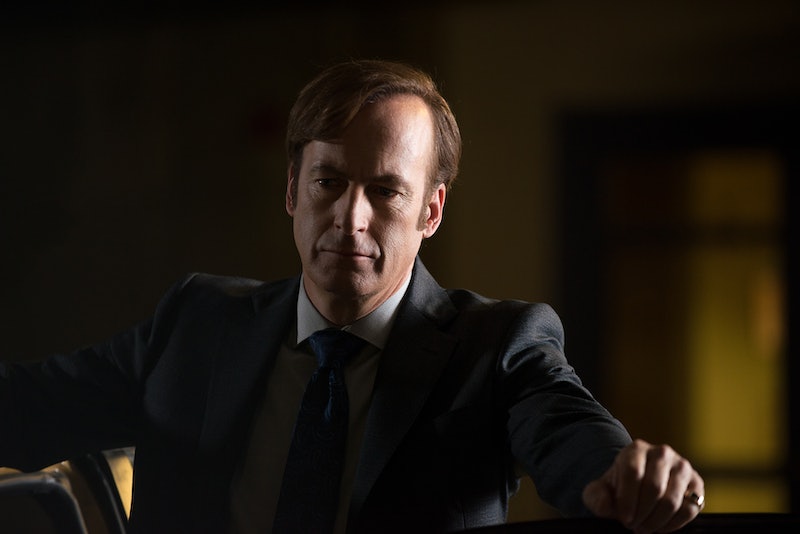 If you're the kind of television watcher that pays attention to nit-picky details like episode titles, then those of AMC's Breaking Bad spinoff Better Call Saul provide some tantalizing clues. They're all short, usually one word (with the exception of Season 1's "Alpine Shepherd Boy") and they all give a hint as to the plot of the episode… usually an obscure one. For example, the titular "Switch" of last week's premiere didn't even make an appearance until the final moments of the episode, but it served as a keen insight into the evolving mind of Saul Goodman, née Jimmy McGill. So what is the title of this Monday's episode referring to? What is a "Cobbler" in the world of Better Call Saul ?

No, the cobbler in question isn't a shoe repairman. It isn't a bad Adam Sandler movie by the director of Spotlight. Nor is it a mountain in Scotland or a fish in Australia. The closest definition of the word that matches the plot of the episode is that of a fruit-based dessert. Once again, the titular phrase doesn't come up until late in the episode, when Mike Ehrmantraut calls Jimmy up to help him get hapless drug dealer Pryce out of a tight spot with the police. ("You still morally flexible? If so, I might have a job for you," is Mike's sales pitch to the increasingly slimy lawyer. "Where and when?" is Jimmy's answer.)

The police invited Pryce on what Mike referred to as a "fishing trip" after they found the man's hidey-hole while investigating the theft of his baseball cards. That suspicious hiding place, coupled with Pryce's flashy Hummer, made them suspect (correctly) that he was a dealer. But in just one short scene, Jimmy is able to successfully convince them otherwise. How? By spinning an elaborate (and hilarious) story that persuades the two detectives that Pryce was hiding something else behind his baseboards. Something a little more "titillating."

After excusing Pryce from the room, Jimmy explains that his client has a "patron" to whom he provides "videos of an artistic nature." The lawyer emphasizes that these (fictional) videos are not porn; they would technically be "categorized as fetish," he clarifies. The videos feature a fully-clothed Pryce doing what Jimmy says is referred to as a "Squat Cobbler." Alternate names for this act include the "Full Moon Pie," the "Boston Cream Splat," and others too vulgar to put in print. Apparently this vulgar act involves the subject sitting in a pie (banana cream, peach, anything will do) and wiggling around while wearing some sort of costume — and crying. (Jimmy describes Pryce as a "regular Julianne Moore" in reference to his copious tears.) When the detectives look at him in disbelief, Jimmy says: "Like I would make this up."

Kim — who, earlier in the episode, was kissing Jimmy and talking about moving in together — can't help but laugh when he regales her with this ridiculous story. But when he tells her that he went so far as to actually film one of these videos with Pryce, she balks. Telling a story to the police to get a client off is one thing; but fabricating evidence is another issue entirely, she says. Jimmy points out that he and Kim pulled off a con together in last week's episode, but she claims that was different. Getting Ken the douchey wealth manager to pay for their hefty bar tab is very different than committing fraud within their actual line of work.

She can't understand why he would take such a risk for a pro bono client. "What is the point?" she asks him. He's unable to answer. And when she tells him that she doesn't want to hear about something like that ever again, he simply says, "You won't." But while it's clear that Kim meant she never wanted him to do anything like that again, it's equally clear that Jimmy's response meant she would never hear about it again — but that he had no intention of ceasing his less-than-strictly-legal activities. And so the downward spiral toward the creation of Saul Goodman continues…