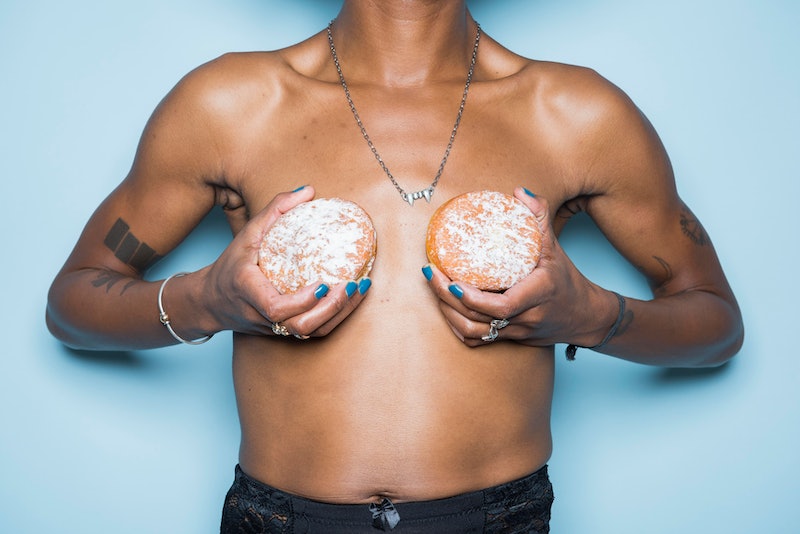 Sometimes it seems like everyone is hating on bras these days, and, to be honest, they have some fairly good reasons to do so. Certain research shows that wearing a bra might actually cause sagging, and there are countless of essays out there about all of the reasons bras suck. But there is one thing you should know before ditching your bra, even if you're totally sold on cleaning out your lingerie drawer forever.

Now, don't get me wrong. I'm loving all of the encouragement to free-boob regardless of the size of your breasts, in part because going braless is my personal preference. This might be because my decidedly mid-size boobs are small enough that I've never felt self-conscious about going without a bra. But whatever the reason, I usually go braless most days of the week.

If I do throw on a bra, it's usually a lacy, triangle number without an underwire that's closer in spirit to a bikini top or a training bra than a "proper" one with an underwire or padding or any of that. I sometimes even find that going without a bra is simpler, like if I'm wearing a backless dress or low-cut top. It's much easier for me to just go sans bra than to try to tuck my breasts into some rubbery chicken cutlets or something strapless.

But even I, a lady who is definitively anti-bra, sometimes feel the need to put one on. My boobs are large enough that I prefer wearing a sports bra if I attempt any physical activity more taxing than a light stroll. When I run or go to a yoga class or try rock climbing, my breasts will jiggle, and that jiggling can hurt. Focusing on my bouncing boobs rather than on my workout is also distracting, and since working out already sucks enough, I don't need another excuse not to do it. I also find that sometimes, after spending a couple of days in braless bliss, my breasts feel sore and need a bit of a lift. That's when I'll bust out my only bra with an underwire, and wear it around for a day or two, because I want to.

For all of the bad rep that bras have gotten these days, there are some women who still do prefer wearing them. Yes, women with large boobs can go braless, but some experience discomfort from letting it all hang out. For women with especially large breasts, wearing a supportive bra can mean the difference between feeling back pain or not. And though there's a lot to be said about uncomfortable or ill-fitting bras, and the relief that comes with unsnapping the clasp at the end of a long day, sometimes they can make a lady feel more physically comfortable, especially when working out or going to the gym.

Besides some of the physical comfort that a bra can provide, there are some psychological benefits to wearing a good bra, too. A 2012 study from the University Of Manchester in the United Kingdom found that women who wore a push-up bra felt more confident. I've definitely felt that effect myself, and part of the reason I wear cute albeit support-less bras is because I think they're sexy, and I love knowing I've got a little bit of lace under my T-shirt. It makes me feel good, and that's the whole point of underwear and lingerie in the first place.

Bras aren't simply a symbol of the patriarchy, even though it sometimes feels that way. For some women, bras are essential. I'm not one of them, but I like having the option either way. And having that freedom of choice, based solely on my own preferences rather than the preferences of others, is important.

Sure, there are lots of reasons to ditch your bra forever, and plenty of them are compelling. But if there's "one thing" you should know before doing so, it's that ditching the bra is your choice. If it works for you and makes you feel comfortable, then go for it. Some women might feel like they have to wear a bra for more physical support, to prevent soreness, or just to feel more confident, and that's totally OK, too.

Deciding to go braless simply because it's the trendy thing to do these days isn't a better reason than wearing one purely because you're worried that other people will be made uncomfortable around your nipples. You can never know exactly why a woman is wearing a bra, so please don't judge her for it. If you're going to ditch your bra forever, remember to be just as open to bra-wearers as you'd like them to be of you. Wearing a bra might not be mandatory, but no one should be shamed for wearing one either.

Now go forth and ditch that bra, or don't. It's up to you. And as long as you're comfortable and feel good about your choice, that's all that matters.

Want more underwear inspo? Check out the video below, and be sure to subscribe to Bustle's YouTube page for more hacks and tricks!

More like this
What’s The Kibbe Body Type Test That’s All Over TikTok?
By Marilyn La Jeunesse
The Most Gorgeous Plus-Size Looks From The Met Gala
By Dominique Norman
Machine Gun Kelly Wore A $30K Diamond Mani To The BBMAs
By Paris Giles
Meghan Markle’s Favourite Skincare Brand Has Finally Landed
By Tomi Otekunrin
Get Even More From Bustle — Sign Up For The Newsletter