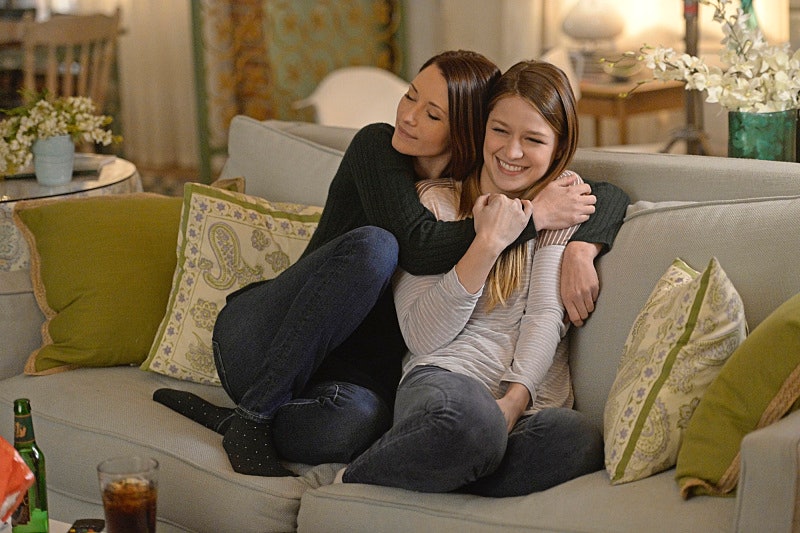 It's hard enough for most of us to achieve a healthy work/life balance, and when half of your coworkers are involved in superhero secret identity work, the line gets even blurrier. However, it was the journalistic integrity side of Supergirl that ended up coming to the rescue on Monday. Though Alex remains unconvinced that they were making the right, Kara released Maxwell Lord on Supergirl.

This has been worrying me for a while, so I was thrilled. Max is a bad person, but that can easily be overshadowed by the rash (and illegal) way he was captured by the Danvers sisters. I'd hate for them to take the blame for this creep. Early on in the episode, James confronted Kara about the way they were holding Lord prisoner without trial, judge, jury, bail, Miranda Rights... all that important stuff. He talked about how she has to accept limitations. For a second, I thought I was watching the Captain America: Civil War trailer. I guess it's not surprising that with so many superheroes on the big and small screen, some of the themes are repeating. Still, as the daughter of a judge, you'd think Kara would know better. Later, after a run-in with the Master Jailer, an a former Fort Rozz guard who was also dishing out his own form of justice (on the escaped prisoners), she recognized that this was not the way to be and let Maxwell walk.

This surely isn't the last we've heard from Maxwell Lord. Though somehow, I think his retaliation is going to be a little bit more explosive than a court battle. Still, I'm glad that Kara realized you can't just lock up bad guys and work outside the law all the time. Meanwhile, the CatCo grew is growing ever more complicated. James wants to come clean to Lucy about Supergirl's identity. We also met Cat's new assistant Siobahn Smythe, and she's a piece of work. While I admire her ambition, I'm with Kara — I do not like her! It was cool that Cat's anecdote about a puff piece gone wrong inadvertently inspired Kara to do the right thing by inspiring James; there was a lot of inspiration going around the office. This may seem like just a day job for Supergirl, but it's clearly proving to be a lot more — which could come in handy down the line when villains like Maxwell Lord come a'knocking.